Africa Must Be a 'Partner' On the Global Stage, UN Deputy Chief Says 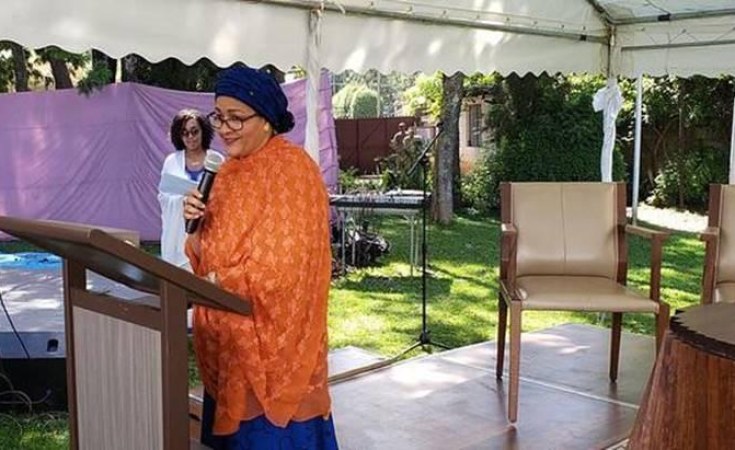 Amina J. Mohammed spoke to DW about promoting sustainability and development in Africa, as well as curbing the spread of COVID-19. She stressed the continent must become an equal player in the international community.

With the 75th session of the United Nations General Assembly currently underway, DW Africa spoke with the UN's deputy secretary-general, Amina J. Mohammed. She spearheads the UN's Decade of Action towards realizing the Sustainable Development Goals (SDGs) -- ranging from poverty and gender inequality to climate change and closing the finance gap. The Nigerian diplomat also shares her thoughts on tackling COVID-19 on the African continent, and the importance of propelling women and young people into leadership positions.

DW: In African societies, there are few women in a position like yours. Is your voice being heard the way you want it to be heard?

Amina J. Mohammed: It's being heard, but maybe not the way I want it to be heard, and I think that my position here is humbling. It's an honor to have this level and this platform. What I try to do is to amplify my voice from the United Nations as an individual, but also collectively, through the many African women that this secretary-general has put at the helm of affairs and different agencies and programs of the UN. So it's not just about me as an African woman, it's about African women, and it's also about those who have Africa in their heart and work for Africa every day.

You're currently pushing the Sustainable Development Goals (SDGs). Can you explain exactly what this entails?

I was privileged to be in a position where we helped to shape the 17 goals. It took us four years to consider what the former secretary-general, Kofi Annan, had put in place, the Millennium Development Goals (MDGs). And with the Sustainable Development Goals, we decided that this needed to be what member states saw as a response to their challenges across the world and not just an issue of north versus south. The first six goals [cover] the unfinished business of the MDGs on poverty, hunger, gender, health, education, water and sanitation.

Then you come to the next set of goals -- I would say seven of them are really about the economy and cities. They talk about renewable energy, consumption and production, the way we produce in this world, climate action, and what happens in the ocean and on land. These sit on very strong pillars, strong institutions, and the rule of law.

Better health care is one of the SDGs. What is the UN doing to try and assist Africa in the fight against COVID-19?

The UN has been delivering to different countries across the continent, PPEs (personal protective equipment), test kits, all the things that you will need to try to suppress the virus. But we're also reinforcing the call and the need to make sure that tackling COVID-19 doesn't mean that we stop giving health care for women who are giving birth, or children or normal vaccines ... that, of course, needs resources. So we're using our platform to convene to make sure resources are available for stimulus packages and filling the financial gaps that many of our countries have.

Bearing in mind that the Millennium Development Goals (MDGs) failed in 2015, how do you intend to achieve the SDGs in Africa?

I would never recognize the MDGs as a failure. I would say that we did the best we could. It wasn't enough. And what we got was a set of goals that built on the fact that goals make you come together and focus on investments that are needed. They made some inroads, and we know what the problem is. We know what the solutions are. But we have to have the political will internally within our countries on the continent as an African Union, but also in the international community.

If we have genuine partnerships in the international community, then they will see Africa as a collaboration and not as a handout. And that, I think, is the change that has to happen. The step-change that needs to happen is that people see Africa as a partner collaborating in what is in everyone's enlightened interest in an interconnected world.

What effect are the SDGs having on poverty reduction in Africa?

The first, I think, is realizing that poverty is inextricably linked to inequalities. So really trying to see how our heads of state and government are looking at those budgets to make sure that the data tells you where everyone is, no matter who they are. And that [governments are] investing equally in education access and health access, and that there are no huge inequalities in the rural areas and urban centers.

I think that the more we get the data to open up these issues, the better [we can] make the connection to lack of investment [when it comes] to poverty. Also, the instability we see in countries across the continent has a lot to do with the lack of investment in people. So it has to be about empowerment and sharing resources more equitably and ensuring that there is justice for everyone.

What has changed when it comes to women in leadership roles in Africa?

I think, sadly, in Africa, at the very helm of affairs where our presidents and our heads of government are, we only have one president in Ethiopia. She's an amazing woman, but she is only one. I think we're doing a little bit better in some of our cabinets, not necessarily in the numbers in terms of equality, but in the portfolios that we're holding. We shouldn't underestimate the importance of how many women health ministers we have, how many women finance ministers we have, and how many women agriculture ministers that we have.

I have enormous hope in the young generation and the young women leaders. They're not waiting for government. They're not waiting for anyone to tell them how to do it or where to do it. They are rising, but we have to open up the spaces. We have to invest in them and make sure that when we say youth are the largest cohort, they are the most important resource,then [we invest in them] to make sure they realize their potential. We have a decade to really get this done, and I'm confident that we can do it. There's not a reason why we can't, but there's every reason why we should.

This interview was conducted by Josephine Mahachi. It has been edited and condensed for clarity.

How Criminals Move Their Money Around the World
Infrastructure