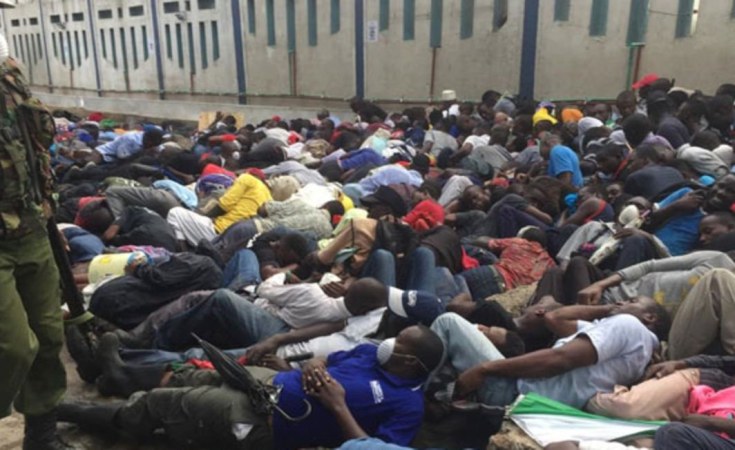 The Nation
Police victimise Mombasa residents at Likoni ferry channel hours before start of nationwide curfew to curb spread of coronavirus, on March 27.
The Nation (Nairobi)
By Sam Kiplagat

Kenyans will pay for brutality against University of Nairobi students by General Service Unit officers four years ago.

In a report seen by the Nation, Director of Public Prosecutions Noordin Haji has recommended that the students be compensated. The report further recommended police training on fundamental human rights.

Some 43 students were injured when anti-riot police officers beat them up on April 2, 2016, within the university premises and on Lower State House Road near the YMCA.

The previous day, the students had conducted elections for their student body, the University of Nairobi Students Association (UNSA).

Investigations conducted by IPOA show that scores of students were pulled from halls of residents, frog-marched to Lower State House Road, made to lie on the tarmac and beaten up.

Some of the female students claimed that they were sexually assaulted by the police but they failed to report because, according to the report, the students did not trust the police to investigate and hold their colleagues to account.

A video of students lying on the tarmac while being beaten with batons was widely circulated but the police denied the claims.

A number of students were also arrested and taken to Central Police station but were later released without charges being preferred against them.

Some of the students were injured when they jumped from second floor as they tried to escape.

In the report, Mr Moses Omirera from the DPP's office has also recommended administrative action against chief Inspector Stanley Mbuvi for being negligent.

He said Mr Mbuvi should be held accountable for the violations committed by the officers under his command during the operation.

Kenya Police Must Gather Evidence First, Before Arrests - Court
Tagged:
Copyright © 2020 The Nation. All rights reserved. Distributed by AllAfrica Global Media (allAfrica.com). To contact the copyright holder directly for corrections — or for permission to republish or make other authorized use of this material, click here.