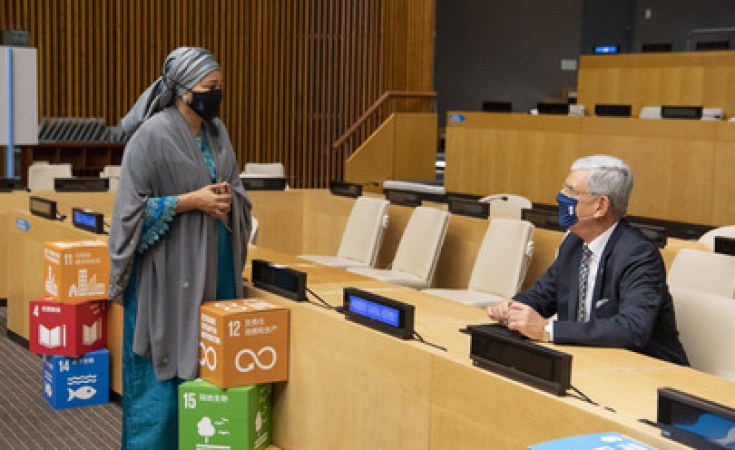 United Nations — When the United Nations was dominated by men, holding some of the highest positions in the staff hierarchy, women staffers were overwhelmingly administrative secretaries seen pounding on their Remington typewriters seated outside their bosses' enclosed offices.

A legendary story circulating in the 1960s recounts the plight of a woman candidate being interviewed for a job. She had superlative credentials, including work experience as a political analyst, and was armed with a post-graduate degree from a prestigious university in the US.

The male UN director from human resources, however, had one final question at the end of the interview: "But can you type?"

Mercifully, that was a bygone era. But since then, the UN has made significant progress trying to conform to an age-old General Assembly resolution calling for gender parity system-wide.

As Secretary-General Antonio Guterres tweeted last week: "The #COVID19 pandemic is demonstrating what we all know: millennia of patriarchy have resulted in a male-dominated world with a male-dominated culture which damages everyone - women, men, girls & boys."

As the UN commemorates its 75th anniversary, the world body claims it has achieved 50:50 gender parity in the higher ranks of its administrative hierarchy.

But it still falls short of reaching "full parity at all levels" of the Organization -- even as two recent staff surveys in New York and Geneva raised several lingering questions, including the largely system-wide absence of women of color, widespread racism in the Organization and the lack of equitable geographical representation of staffers from the developing world.

In a letter to staffers on September 2, Guterres singles out the efforts made shortly after he took office: "Nearly four years into this effort, I can report that we have come a long way".

In 2019, for the first time in United Nations history, he said; "we reached parity in the Senior Management Group and among Resident Coordinators. On 1 January 2020, and well ahead of schedule, we attained this milestone by reaching parity among all full-time senior leaders, comprising 90 women and 90 men at the level of Assistant and Under-Secretaries-General."

"In addition to the commitment to reach parity and diversify in our senior leadership by 2021, I have committed to achieving parity at all levels of the Organization by 2028".

"We are on track to meet this target, but progress is uneven and inconsistent. Our greatest challenge is in field missions, where the gap is the largest and the rate of change is slowest", he added.

Prisca Chaoui, Executive Secretary of the 3,500-strong Staff Coordinating Council of the UN Office in Geneva (UNOG), told IPS that in the past, despite the existence of competent women in the UN, it has largely been the reality that when women do achieve career progression, it tends to be mostly women belonging to certain geographical groups or regions.

"There are concerns that implementation of the UN's Gender Parity Strategy may follow a similar pattern. It is crucial that this important initiative ensures a diverse gender parity that includes women from the global South, women of colour, and women from developing and underrepresented countries," she noted.

The Organization can do better at bringing the valuable and creative talents of diverse women together to help bridge the gender gap. This can only help the UN better deliver on its mandate - especially in these challenging times.

"Gender and geographic diversity should not be mutually exclusive. We can implement the Gender Parity Strategy while ensuring improved geographical representation and diversity," Chaoui declared.

Meanwhile, the lack of geographical diversity is reflected in the absence of staffers from some 21 member states, according to the latest December 2017 figures released in a report to the UN's Administrative and Budgetary Committee.

Ian Richards, former President of the Coordinating Committee of International Staff Unions and Associations, and an economist at the Geneva-based UN Conference on Trade and Development (UNCTAD), told IPS that last year Guterres asked the UN's member states at the General Assembly to let him change the staff regulations to allow the quotas and promotion and recruitment bans based on gender that he had been seeking for a while. But they refused his request.

"It seems they felt it went against Article 8 of the UN Charter on non-discrimination and Article 101 on merit".

However, this year, while the pandemic and Covid-19 recovery efforts drew attention elsewhere, it seems he made the changes anyway, albeit through a type of executive order called an "administrative instruction", complained Richards.

Firstly, is the executive order legal if it contradicts the staff regulations? he asked. Lawyers have apparently been looking at this. And, secondly, is it wise to provoke our member states by disregarding their instructions at a time when some are trying to cut our funding? There seems to be some disquiet.

"We all want to advance gender balance and we are all impatient. But I hope our efforts to do so doesn't backfire because of this".

A further question is why aren't the General Service staff included?. They are staff like everyone else and form the backbone of our organization," asked Richards.

Currently, the UN has a global staff of about 34,170, according to the latest figures from the Chief Executives Board for Coordination.

While the Secretariat staff in New York is estimated at over 3,000, the five largest UN agencies worldwide include the UN children's agency UNICEF (12,806 staffers), the Office of the UN High Commissioner for Refugees (9,740), the World Health Organization (8,049), the UN Development Programme (7,177) and the World Food Programme (6,091).

Purnima Mane, a former UN Assistant Secretary-General and Deputy Executive Director of the UN Population Fund (UNFPA), told IPS it is indeed heartening to hear that the UN has reached gender parity among its senior leadership.

The Secretary-General further promises that steps will be taken to ensure parity at all levels of the organization by 2028 which is most welcome, she said.

"It is also heartening to note that there is attention to the reality that it is not just about numbers but also about a shift in organizational culture. There obviously needs to be transparency on what this shift implies in terms of its goals, how they will be achieved, and how success will be measured."

While equitable recruitment is one way to measure gender parity, number of male and female staff obviously cannot be the sole measure of success in achieving gender equality, she argued.

"Parity in numbers is one, critical part of ensuring gender equality in the UN but it needs to be matched with efforts that address the quality of work life. Recognizing the demands on the lives of women and men today and building flexibility in work life policies is a key part of ensuring this quality and equality," she added.

Attention will have to be paid to other critical areas of work life, such as parity in retention, rate of promotion, salary, benefit package including adequate and flexible work arrangements especially those related to maternity (and paternity) leave, and support and mentoring of women, Mane said.

Targets will not only need to be set for each of these areas but also reported on to ensure transparency and accountability that gender parity is successful in a comprehensive and meaningful way, in the long run, she declared.

Ben Phillips, author of 'How to Fight Inequality' and former Campaigns Director for Oxfam and for ActionAid, told IPS there is a growing unity amongst grassroots groups across the world fighting intersecting inequalities.

That is what 'we the peoples' really means. It is that united push that is driving a long-overdue reckoning across institutions of every kind, said Phillips who co-founded the Fight Inequality Alliance.