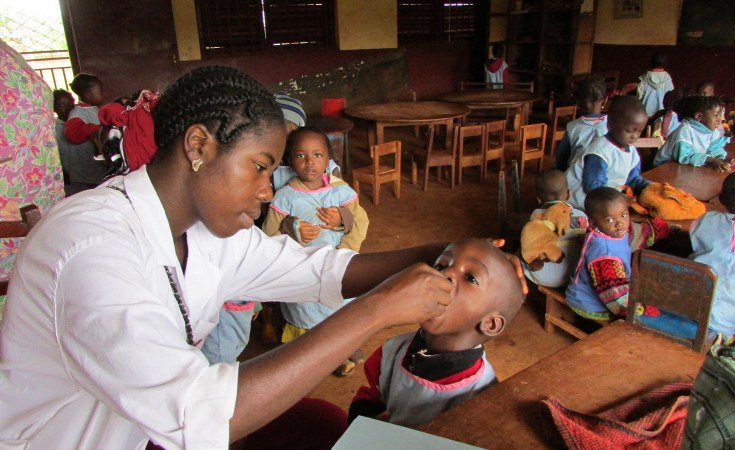 Center for Disease Control/Flickr
The polio vaccination campaign in Nigeria is being hampered.
This Day (Lagos)
By Michael Olugbode

The World Health Organisation (WHO) has advised Nigeria not to go to sleep on the fact that poliomyelitis has been finally eradicated.

Speaking at the presentation of the last infected case of poliomyelitis in Africa to journalists at the weekend in Maiduguri, the WHO Representative in Nigeria, Dr. Walter Kazadi, said Nigeria needs to be vigilant and ensure that the disease does not creep into the country again.

He said: "So we need to remain vigilant, to continue surveillance and make sure that every child get immunised so that we keep immunisation coverage high enough to protect all the children. We look forward to such time that the global eradication is achieved."

Kazadi, who noted that WHO's target is global eradication of polio, and working at pushing the disease from Afghanistan and Pakistan, two Asian countries where the wild polio virus are still found, advised that: "What Nigeria needs to do is to remain vigilant particularly around the borders."

The United Nations Humanitarian Coordinator in Nigeria, Mr. Edward Kallon, who presented a gift of a computer to the child last infected by the polio virus, said he is excited that polio is eradicated in Africa and that in spite of the Boko Haram crisis, a good story is coming out of Borno State, the epicentre of the crisis.

He said: "Most of you are aware that Nigeria was the last country in Africa to become polio free. We should not be complacent, ensure that children are vaccinated at the appropriate ages with right vaccines to prevent any form of this type of disease again."

Earlier, the parents of the last child infected by poliomyelitis in Africa had recounted their experiences and counseled other parents to put up their children for immunization.

The mother of the child (Modu Busami, 5 years old), Aisha Kolo said they were unable to get the child timely immunized because of the activities of Boko Haram.

Kolo said the child began to develop the symptom at two years old but because they did not have an idea of what to do, they were giving him local herbs.

She lamented that the case was compounded by the fact that they were holed up in their village and could not access modern health facilities in Monguno until they were liberated from the insurgents.

She said: "It was not until when we moved to Monguno that we were told of the severity of Modu's case and we made him available for treatment."

"When we got to Monguno, the WHO officials in the town after examining Modu, informed us that it was a case of polio. At the initial stage, the boy could not walk, but with the medication administered on him at the camp in Monguno, he now walks.

"The paralysis as a result of the polio virus started manifesting on my child Busami Modu in 2016 when he was two years old. I thank WHO and Borno State Government for the support they have given to my son.

"As a living witness of the effect of polio on children, I want to strongly advise parents to always immunise their children or wards to save the children from the consequences of the virus."

Kolo, who was carrying the baby in her hands during the interview with journalists, said she learnt her lesson from the case of Modu and have made her little sister available for all polio immunizations.

The father, Bulama Kachallah, who also spoke to journalists, said he would not want any other child to pass through what his boy went through, lamenting that Modu was almost crippled by the disease.

Kachallah therefore urged parents to ensure that their children are always given the opportunity to be immunised wherever they found themselves.