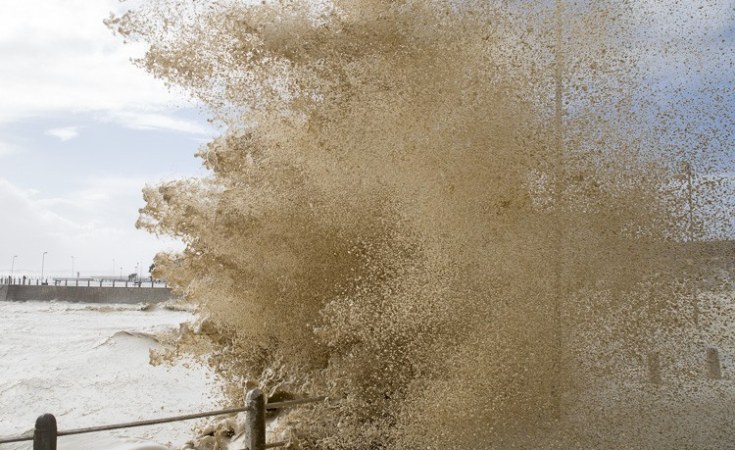 A look at the history of sewage outfalls in the bays around the city shows that residents have been complaining since the first one was completed in 1905. And as now, their concerns were ignored.

In a 2017 study, academics from the universities of the Western Cape, Cape Town and Stellenbosch drew attention to the poor quality of sea water at Granger Bay on Cape Town's Atlantic seaboard. Their scientific observations were documented in an article in the South African Journal of Science titled Desalination and seawater quality at Green Point, Cape Town: A study on the effects of marine sewage outfalls.

What the researchers found were high levels of persistent organic pollutants - both chemical and pharmacological - and bacterial contamination in seawater, beach sediment and marine organisms. They drew attention to the "growing chemical pollution risk" in the sea and stated that because of the "hazards" these pollutants pose "the precautionary principle is highly relevant in terms of human health". They called on the City of Cape Town to act, questioning the wisdom of pumping about 30 million litres of untreated sewage into the ocean daily from the Green Point outfall.

Another paper, Presence and risk assessment of herbicides in the marine environment of Camps Bay, Cape Town, South Africa, by academics from the University of the Western Cape and the University of Stavanger in Norway recently appeared in Science and the Total Environment. It draws attention to the presence of five herbicides in seawater, beach sediment and marine organisms collected in Camps Bay, which pose an "ecotoxicological risk" to marine organisms and a risk to human health for anyone who regularly eats seafood from the bay. The researchers conclude that the daily release of 2.5 million litres of untreated sewage from the Camps Bay outfall accounts for the chemicals' presence.

In both instances, officials from the City responded to this peer-reviewed research with denial. In answer to the first report, the City's mayoral committee member for water and waste services, Xanthea Limberg, stated that the Green Point outfall dilutes effluent to a degree that does not pose a risk to either human or marine life. She contended that any environmental impact is "confined to the area within the immediate vicinity of the outfall pipe".

Responding to the second article, Limberg stated that while she did not dispute the presence of the chemicals in the water, the accusation that they were there because of the outfall is "not substantiated by fact, data or science". She made this assertion even though the authors note that during the period they collected samples (September 2017) there was no stormwater ingress into the ocean due to the drought in Cape Town.

The Camps Bay article was completed as part of a multi-year joint research project between South African and Norwegian academics called SANOCEAN. The project, funded by the two countries' governments, is focused on ocean research that emphasises the "blue economy, climate change, the environment and sustainable energy".

A history of the Green Point sewage outfall reveals that the City's current refusal to acknowledge the health implications of pouring millions of litres of untreated sewage into the ocean every day follows an established pattern of denial - and a refusal to act - that dates back to the late 19th century.

In the late 1880s, the colonial government was forced to act because of the unwillingness of city officials to address the sanitary problems in Cape Town. It appointed a parliamentary select committee to investigate "the sanitary state of Cape Town". A claim by a medical doctor, HW Saunders, that sanitary conditions in Cape Town "were as bad as any town in Christendom" was typical of those the committee heard from numerous sources during its deliberations. The mayor, however, denied there was a problem, stating that the evidence the committee was hearing was exaggerated and "matters are not as bad" as it was being told.

Despite this assertion, and largely due to pressure from merchants in the city fearing a loss of business owing to the poor sanitary conditions, plans were drawn up in the 1890s to lay sewage pipes and build an outfall at Green Point. While most municipal councillors by this time had accepted the need for improved sanitation, the decision to pour sewage into Table Bay was met with fierce opposition. One council member TJ Anderson stated that other options must be considered because sewage should not be "thrown into our beautiful bay". The Cape Argus argued that popular opposition to the sea disposal was so "strong" that alternative methods had to be considered.

Despite this opposition, the Green Point outfall was completed in 1905. It was not long before it contributed to ill health in Cape Town, and by the 1920s, the municipality began to receive complaints from residents about sewage appearing on the beaches and in the sea around the outfall. These complaints became so regular that the city's medical officer for health, Shadick Higgins, investigated them in 1924. Higgins found evidence of sewage on the beaches and in the sea, which he characterised as "dangerous" to public health, and drew specific attention to the "exceptional amount" of enteric fever (typhoid) in Mouille Point and Sea Point, which he blamed on the sea disposal of untreated sewage.

His concerns were dismissed by DE Lloyd-Davies, the city engineer, who accused Higgins of "exaggerating" the problem. Preferring to listen to Lloyd-Davies, city bosses denied there was a problem and did nothing. Despite this, the complaints continued and another report from Higgins followed in 1929 that again linked enteric fever in Mouille Point to the outfall.

Frustrated by the city's refusal to act, a group of Mouille Point residents approached the then Supreme Court seeking an emergency interdict to get the outfall closed. While the presiding judge stated that he could not grant the interdict because there was no alternative to the outfall, he argued that the residents had made a "very much stronger case" than the municipality. In recommending to the residents that they approach the high court for permanent relief, he warned the city that it must consider its "public responsibility in this matter". Compelled to act by the court, by July 1931 the municipality had extended the outfall by 640m.

In 1956, the city's principal chemist R.Abbott noted that sewage was leaking from the outfall pipeline and causing "considerable pollution" of the beaches around the outfall. The municipality took no action. Ten years later, after aerial photographs in 1967 revealed a "sewage bloom" following the shoreline that "completely envelops Granger Bay", Solomon Morris, the city engineer, warned the council that unless it addressed the outfall, it could well face litigation in terms of the Water Act (1956). Once again the municipality refused to acknowledge the problem or address it.

Fourteen more years passed before the city received yet another warning about seawater quality, this time from the Department of Water Affairs, which noted that the municipality must address pollution caused by the outfall "as a matter of urgency". Spurred into action, a new, extended pipeline was completed in 1986 at a cost of R13.3 million (about R180 million today). It was supposed to last 50 years. It lasted less than three, breaking in half in 1989 and forcing the closure of beaches for months along the coast from Sea Point to Granger Bay due to sewage contamination. In 1990, a further R30 million (about R140 million today) was budgeted for yet another outfall. It was completed in 1993 and operates to this day.

The history of the Green Point outfall reveals several significant issues. First, it shows how costs committed to a particular technology result in a technological lock-in that excludes alternatives, such as sewage treatment, because of the funds already spent on it. This appears to have happened in Cape Town: no matter how outdated or inappropriate the outfall has become, it remains the only option for sewage from the city centre because of the Council's refusal to consider alternatives. It also shows that the municipality has only acted when threatened with legal action, or when warned to do so by other tiers of government. Last, it reveals how Cape Town's leaders have consistently denied that the disposal of untreated sewage into the sea is a potential threat to human health.

This denial is one that is all the more puzzling in light of the commitment the City made earlier this year to be more transparent about water quality. After failing to produce water quality reports for several years, in March the City published a report called Know Your Coast. Although this report only contains information relating to bacteriological contamination, it nonetheless includes a commitment from the City to improve "information and disclosure". It states that the City will "improve" and "facilitate" public access to information.

The report also observes that the City is "committed to finding and implementing solutions, in cooperation with key stakeholders". Given this commitment, it's not clear why the City has reacted so negatively to the recent research. Perhaps the answer can be found in draft by-laws the City published in February that will, if enacted, prevent anyone from testing water quality in any of its nature reserves without formal permission from the City. This by-law seems to indicate that the City is trying to restrict access to the oceans and suggests it is only interested in research and research findings that it can control and shape to meet its own specific objectives.

We will never know how many people have contracted some form of gastrointestinal illness or other infection from the polluted ocean around Cape Town. By the time symptoms are present or diagnosed by a healthcare professional, causation is difficult to prove. Nonetheless, it is clearly high time that the City recognises that dumping millions of litres of untreated sewage into the ocean is unsustainable and a risk to human and marine health, as it has always been. As the authors of the 2017 article note, there are now "compact, new treatment systems that can treat the sewage to high standards and recover the water before discharge to the ocean".

Perhaps as a starting point, the City should reflect on the words of councillor JA Combrinck, who, when the Green Point outfall was first mooted in 1890, warned of "the danger to life which must inevitably follow the wholesale deposit of filth in Table Bay".