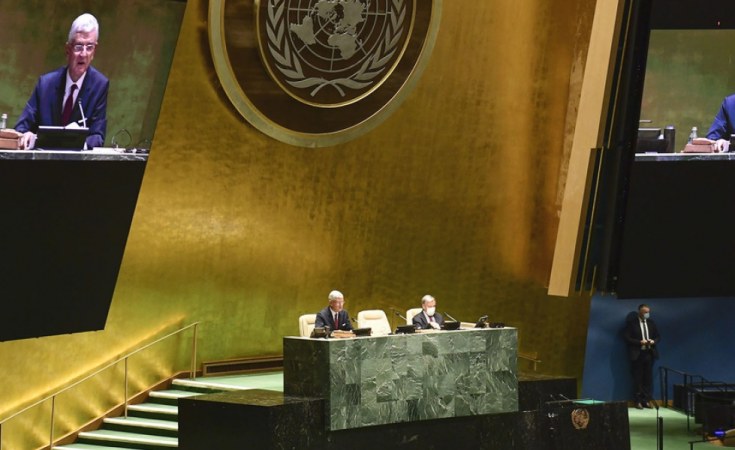 The issue of peace and security in the Congo is expected to be one of the issues to feature during the high-level debate at the 75th United Nations General Assembly taking place via video conferencing.

The Southern African Development Community (SADC) is expected to use the General Assembly debate to express its concerns about the decision by the UN to reconfigure the Force Intervention Brigade (FIB) in the Democratic Republic of Congo (DRC) so as to include non-SADC countries.

The UN last year adopted Resolution 2502 to reconfigure the FIB, which falls under the United Nations Organization Stabilization Mission in the DRC (MONUSCO) mandate. The resolution extended MONUSCO's mandate for another year until 20 December 2020.

However, in implementing the new mandate, the UN has indicated its intention to undertake a reconfiguration of FIB by replacing some of the SADC troops with those from outside the region, a decision that is not in line with SADC's common position.

The FIB is the first UN peacekeeping operation specifically tasked with carrying out targeted offensive operations to "neutralize and disarm" groups considered a threat to state authority and civilian security in DRC.

In its quest to have lasting peace in the DRC, SADC has consistently emphasized that the FIB should not to be tampered with, but rather be strengthened, with dedicated enablers to enhance its combat capabilities.

SADC's concern is that the inclusion of non-SADC troops in the FIB has the potential of undermining the brigade's operational effectiveness and unity of command.

The 40th SADC Summit reiterated the position by the region that FIB should not be tampered with.

The SADC Council of Ministers have since requested a consultative meeting with the UN Secretary General to engage on the region's position on the reconfiguration of the FIB.

SADC has prioritised the maintenance of peace and security as a prerequisite for its overall regional integration agenda.

It is for this reason that peace and security is considered as the Foundation Pillar that anchors the other three priority pillars in the Regional Indicative Strategic Development Plan (RISDP) 2020-2030, which is the development blueprint for SADC.

The UN General Assembly also presents SADC leaders with the opportunity to reiterate their calls for the lifting of economic sanctions on Zimbabwe.

The 39th SADC Summit held in Dar es Salaam, Tanzania in 2019 passed a resolution on the lifting of the sanctions and adopted 25 October each year as Anti-Zimbabwe Sanctions Day where Member States will engage in various activities, including organising conferences, debates or issue anti-sanctions statements.

The Sustainable Development Goals (SDGs) are also expected to dominate debate during the General Assembly.

The SDGs are the 17 internationally agreed targets to reduce poverty and maintain peace, while protecting the planet.

These have remained at the top of the agenda since their adoption in 2015, with many arguing that the Covid-19 pandemic has only underlined more forcefully why they are so important.

The SDGs will be put under the spotlight, with SADC and African leaders expected to update the world on progress the continent and the region has made in implementing the goals.

The issue of climate change and the need to reduce carbon emissions is likely to feature prominently during the debate, with African leaders expected to call for more robust measures to mitigate the effects of climate change as well as reducing the emissions of dangerous gases by the industrialised nations.

Climate change is already having a huge impact on developing nations which have seen the brunt of adverse weather conditions such as droughts and cyclones which have caused widespread famine and floods, respectively.

The SADC region has been affected by the droughts, resulting in serious food shortages, while floods wreaked havoc in Malawi, Mozambique and Zimbabwe in the 2018/19 rainy season.

In addition, the earth's biodiversity, its rich variety of life, is declining at what the UN has described as "an unprecedented rate".

Over one million species are at risk of extinction, two billion hectares of land are currently degraded and 66 percent of oceans, 50 percent of coral reefs and 85 percent of wetlands have been significantly and negatively altered by human activity.

According to the UN, a major international summit to discuss how to reverse the deterioration of the natural environment and how it is harmfully impacting people's lives was due to be held this year in Kunming, China, but it has now been postponed until May 2021 due to Covid-19.

Gender equality and the rights of women is expected to feature during the debate, with women and girls having been severely impacted by Covid-19 as they suffer a disproportionate social and economic fallout, according to Guterres.

Issues relating to gender equality and empowerment will further be discussed on 1 October in the context of the 25th anniversary of the Beijing Platform for Action, which is widely acknowledged as the most comprehensive and forward-looking plan for advancing the rights of women and girls.

The Beijing Platform for Action imagines a world where each woman and girl can exercise her freedoms and choices, and realize all her rights, such as to live free from violence, to go to school, to participate in decisions and to earn equal pay for equal work.

Southern African News Features offers a reliable source of regional information and analysis on the Southern African Development Community, and is provided as a service to the SADC region.

This article may be reproduced with credit to the author and publisher.

SANF is produced by the Southern African Research and Documentation Centre (SARDC), which has monitored regional developments since 1985. Email sanf[at]sardc.net

The UN At 75 - Technology Wars, the U.S.-China Meltdown and Africa's Quandary

WHO Urges Caution Over Covid-19 'Infodemic', Misinformation
Tagged:
Copyright © 2020 Southern African News Features. All rights reserved. Distributed by AllAfrica Global Media (allAfrica.com). To contact the copyright holder directly for corrections — or for permission to republish or make other authorized use of this material, click here.