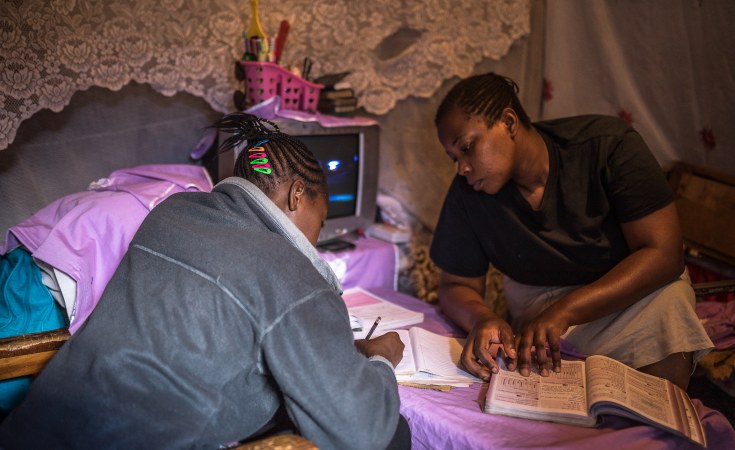 Brian Otieno/Unicef
Florian helping her daughter Sheila Achieng do her revision at home in Kibera as schools are closed due to the Covid-19 pandemic (file photo).
The Nation (Nairobi)
By Faith Nyamai

The October reopening of schools will be in phases, ending six months of closure occasioned by the Covid-19 pandemic.

In its final proposal to Cabinet Secretary George Magoha on Monday, the Education Response Committee on Covid-19 said learners should be in school from October 5 to 19.

After a week or two, the rest of the learners - Pre-Primary One and Two, Grade One, Two and Three, Standard Five and Six and Form One and Two - will resume studies.

The phases will ensure schools learn to manage the students while implementing the Covid-19 health protocols, the task force said.

It will also allow the government to deliver 360,000 desks to 5,136 primary and 263,157 lockers and chairs to 5,254 secondary schools made under the Economic Stimulus Programme.

"The committee acknowledged that Standard Seven pupils and Form Three students should be in the first group because they are the next candidates," a source told the Nation.

"There is need to help them recover lost time."

Grade Four pupils are expected to sit their first national examination at Grade Six in April 2023, after which they will join junior secondary school.

Grade Five was to begin in January but with the change of school calendar, the pupils will start classes in June 2021.

Already, Grade Five textbooks have been evaluated for conformity to the new curriculum designs, skills and concepts coverage and development ahead of the launch.

The Kenya Examinations Council will administer tests to learners from Grade One to Form Four to assess their ability to remember what they studied before schools closed in March.

The assessments will, however, be marked internally.

The new second term will end on December 18 after which learners will break for two weeks before going back to school for third term from January 5 to April 2.

KCPE and KCSE test results are expected to be released in May.

Teachers are advised to develop a crash programme to enable them complete first and second term work before new learners report between June and August.

"It is noted that the Covid-19 curve has been flattening. Arising from this, there is consensus among education stakeholders that schools will be reopened earlier than anticipated," Dr Kipsang wrote to his Health counterpart Susan Mochache on Monday.

"Aware that the public schools were used as quarantine and isolation centres, we request that these schools are vacated and fumigated by September 28 to enable the heads prepare them for eventual reopening."

Learners to Be Back in Class On October 19