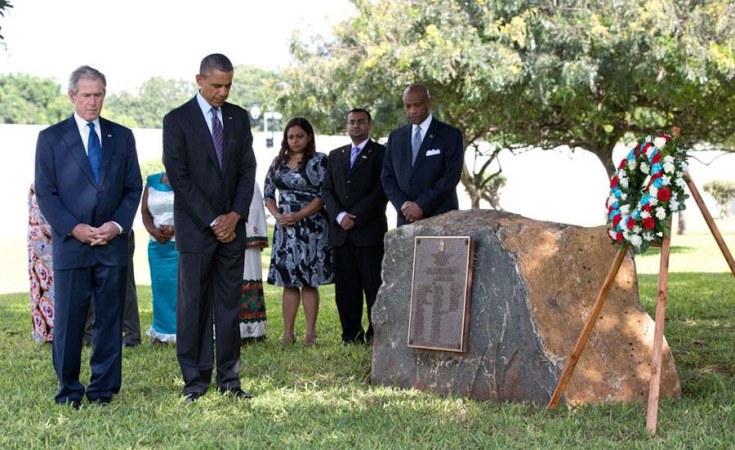 Pete Souza/White House
Presidents Obama and Bush during the moment of silence in memory of those killed in 1998 bombing at US Embassy in Tanzania (file photo).
Radio Dabanga (Amsterdam)

Khartoum — Prime Minister Abdallah Hamdok has announced that the amounts required to compensate the families of the victims of the bombing of the destroyer USS Cole* in Yemen in 2000, and the 1998 bombing of the US embassies in Dar El Salaam in Tanzania and Nairobi in Kenya, are ready for payment.

Briefing the Council of Ministers, Hamdok clarified the efforts made to remove Sudan from the list of State Sponsors of Terrorism, and that the agreement contains clauses that protect the Sudanese government from any future issues.

The Cabinet discussed in its meeting the possibility of reaching solutions according to a specific time limit and the required media role, and the Council was also asked about the available options. The Council also reviewed the continuous efforts made by Sudanese living in the USA and the efforts made by the families of the victims as well as American companies to remove Sudan from the list.

The Council stressed the importance of the plan of engagement with the USA through bilateral cooperation and joint action, leading to the removal of the name Sudan from the list in order to start a new phase that witnesses normal relations between the two countries.

Removing the name of Sudan from the list of State Sponsors of Terrorism was also discussed during the visit of the President of the Sovereign Council, Lt Gen Abdelfattah El Burhan, and his accompanying delegation to the United Arab Emirates, which concluded yesterday.

The delegation also discussed the future of Arab-Israeli peace, which leads to stability in the region and preserves the right of the Palestinian people to establish their state according to the vision of the two-state solution, and the role that Sudan is expected to play In order to achieve this peace.

The press bureau of the Sovereign Council that reported the news did not mention any additional details on this subject, but indicated that the results of these discussions - which took place with the American side and lasted three days - will be presented to the transitional government bodies in order to discuss them and reach a common vision about it that achieves the interests and aspirations of the Sudanese people.

El Burhan and his delegation, who returned to Khartoum yesterday, had also discussed with the US side during the visit the issue of removing Sudan from the list of countries sponsoring terrorism and other restrictions imposed by the USA on Sudanese citizens.

El Burhan and the Minister of Justice, extensively discussed the removal of Sudan from the list of countries sponsoring terrorism and support for its economy with substantial sums in return for its agreement to normalise with Israel. These negotiations apparently stalled after US officials refused to make a categorical commitment according to specific timetables for providing aid to Sudan and removing its name from the list of terrorism without conditions.

* USS COLE: The October 12, 2000 attack killed 17 sailors and wounded more than three dozen others when two men in a small boat detonated explosives alongside the Navy guided-missile destroyer as it was refuelling in the southern Yemeni port of Aden, blasting a gaping hole in its hull. The vessel was repaired and later returned to full active duty.

In a ruling in March 2019, the US Supreme Court prevented US sailors injured in the deadly Al Qaeda bombing in 2000 of the US Navy destroyer USS Cole from collecting $314.7 million in damages from the government of Sudan for its alleged role in the attack.

A majority of eight judges to one overturned a lower court's ruling that had allowed the US servicemen to collect the damages from certain banks that held frozen Sudanese assets. However the new judgment rests more on a legal technicality than exonerating Sudan. In the ruling, the justices agreed with Sudan that the lawsuit had not been properly initiated in violation of US law, because the claims were delivered in 2010 to the Sudanese Embassy in Washington rather than to its Minister of Foreign Affairs in Khartoum.

15 of the injured sailors and three of their spouses sued Sudan's government in 2010 in Washington. At issue was whether mailing the lawsuit to Sudan's embassy violated the Foreign Sovereign Immunities Act, a US law governing when foreign governments may be sued in American courts.

U.S. Removes Sudan From Terror Sponsors List
Tagged:
Copyright © 2020 Radio Dabanga. All rights reserved. Distributed by AllAfrica Global Media (allAfrica.com). To contact the copyright holder directly for corrections — or for permission to republish or make other authorized use of this material, click here.