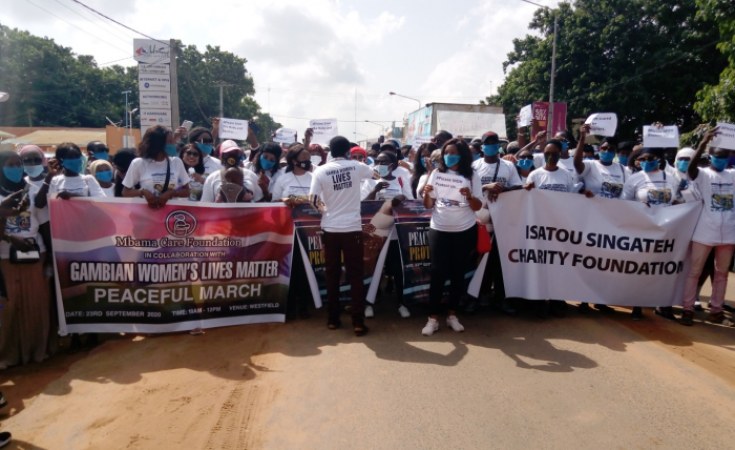 The Point
Hundreds of people - mainly women - gathered in the busy Kairaba Avenue road protesting against what they described as the “alarming rate” of maternal mortality in the country.
The Point (Banjul)
By Momodou Jawo

Hundreds of people mainly women yesterday thronged the busy Kairaba Avenue road protesting over what they described the "alarming rate" of maternal mortality in the country.

The one hour long protest started at Serrekunda West Park junction to Alliance Franco. The protesters chanted and displayed placards with powerful inscriptions. 'Gambian women lives matter, no woman should die in labour, please Ministry of Health protect us, please help I don't want to die at child labour, I am scared to be pregnant, who looks after my child if I die? amongst others.

The protest was organised by Mbama Care Foundation in collaboration with Gambian Women's Lives Matters movement. The leader of the Gambia Moral Congress (GMC), Mai Ahmed Fatty, and the wife of Mamma Kandeh, the leader of Gambia Democratic Congress (GDC) also attended the protest including some pregnant women.

Speaking at the end of the March past, Sally Jobe, said: "It's rather unfortunate that we're losing lots of women in the country as a result of maternal and mortality deaths. The phenomenon has claimed the lives of mothers, sisters, neighbours, daughters and friends among others."

She claimed that 60% or more of our women who died during delivery is based on Postpartum hemorrhage (also called PPH), saying this is when someone has serious bleeding after being delivered of the baby.

"This is quite unfortunate. This has been happening in the country and it's not the time to stop. We're angry and women are tired which should not happened. Women are our mothers and sisters, hence this should not happen. If we lost this women, who are going to vote for this politicians? Should a human being died while giving life? Why did we have a health system in the country if it can't save women?

Gambian women, she added, are tired and their lives matters. "We want to make sure that this occurrence of maternal and mortality has to stop. This has to stop and our government needs to understand that Gambians women are tired of dying," she emphasised.

The government, she continued, needs to equip our health facilities in the country with standard equipment and treat all cases on time and refer all complicated cases on time. "The government should come with a solution and come with a readily ambulances in every communities were emergencies will be treated accordingly and timely."

For her part, Manyima Bojang, said it's rather unfortunate that the our young women and sisters are dying in recent weeks and months during pregnancy and child birth, while many others suffer life time maternal health associated complications, adding it was among the reason the Gambia Women Lives matter movement was formed.

"We called the attention of the government and most importantly the Ministry of Health to accord attention to the protest and address some of the issues raised during the protest."

Fatou Touray, the proprietor of Kerr Fatou added: "We should all come out and fight for the issues of women. It should not be competition among us. However, it is about bettering our lives."

Lamin Kinteh of Bakoteh who claimed he lost his wife after delivery said: "This is not about politics, but rather about issues affecting our Gambians women. Therefore, any government that is not working towards supporting the cause of Gambians women should be voted out." 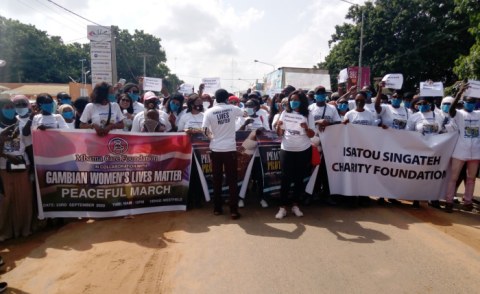 Here are The Ideal African Countries to Give Birth In
Tagged:
Copyright © 2020 The Point. All rights reserved. Distributed by AllAfrica Global Media (allAfrica.com). To contact the copyright holder directly for corrections — or for permission to republish or make other authorized use of this material, click here.