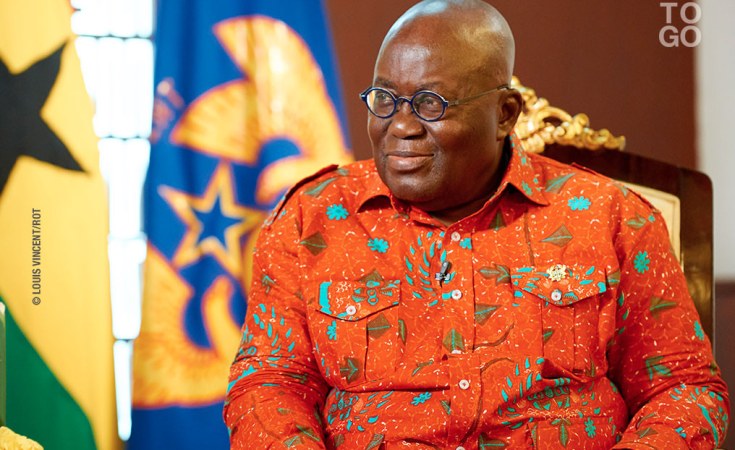 An area of eastern Ghana has declared itself a sovereign state. The region known as Western Togoland has had secessionist attempts in the past.

Armed men demanding the secession of Western Togoland from Ghana blockaded major entry points to the Volta region of Ghana on Friday morning.

Local sources say the group are holding three police officers hostage, including a District Commander, and attacked two police stations. Prior to the blockade, the group reportedly broke into an armory and stole weapons.

"This is a very serious situation because just few weeks ago we saw [what happened] when they mounted signs along the major roads welcoming people into the Western Togoland State," a local resident told DW. "Blocking the roads with heaps of sand, burning tyres [and ] even holding security personnel hostage."

About 12 hours before Friday's dawn operation, the Western Togoland Restoration Front (WTRF) published photos of the graduation ceremony for around 500 personnel who underwent training for months in secret locations, raising questions over the effectiveness of security agencies in the region.

Ghana's Western Togoland region is predominately wedged between Lake Volta and the Ghana-Togo border. Currently, a number of splinter groups are demanding the area be recognized as a sovereign state.

In a press release, the chairman of the WTRF, Togbe Yesu Kwabla Edudzi I, declared that efforts for consolidating statehoood, which began on 1 September 2020, were being put into practice.

The press release also claimed "roadblocks to assert its sovereignty are all over the Southern sector."

Ghanaian police have been ordered to "leave the region in 24 hours" and surrender weapons. Some radio stations appear to have been taken over by members of the WTRF. The group has demanded the release of prisoners currently being held in detention for secessionist activities.

Travelers urged to be cautious

Meanwhile, on Facebook, Ghanaian police have cautioned travellers to be aware of "security operations" in some communities in the Volta Region.

Local media have reported the minister of the affected Volta Region, Archibald Letsa, urged travelers to remain calm and allow security personnel to do their jobs.

The territory of Western Togoland was first colonized by Germany in 1884 and incorporated into the Togoland colony. After Germany's defeat during the First World War, the colony of Togoland was divided between France and Britain as protectorates. The western part of Togoland became part of Britain's Gold Coast colony, which became independent in 1957 to form modern-day Ghana. Togo gained independence from France in 1960.

Western Togoland is a member of the Unrepresented Nations and Peoples Organization (UNPO). Four million people live in the region. In terms of language and culture, Western Togoland, especially the Volta region, has more in common with Togo. Locals in the region say they feel underrepresented by Ghanaian authorities.

A previous unsuccessful attempt to declare Western Togoland independent from Ghana took place in 2017. In March 2020, around 80 members of the separatist group were detained for protesting the arrest of seven leaders of the Homeland Study Group Foundation. The charges were later dropped.

Ghana Govt Orders Clampdown on Secessionist Group
Tagged:
Copyright © 2020 Deutsche Welle. All rights reserved. Distributed by AllAfrica Global Media (allAfrica.com). To contact the copyright holder directly for corrections — or for permission to republish or make other authorized use of this material, click here.