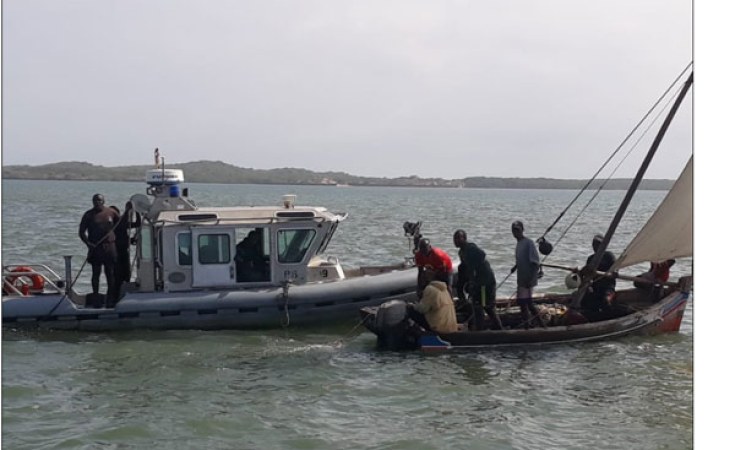 Lapses in the law, coupled with porous border points, have continued to fuel cross-border miraa and fish smuggling between Somalia and Kenya.

The government closed the border with Somalia, particularly at Kiunga in Lamu, as a measure to counter human trafficking, terror merchants and smuggling of contraband goods.

Nation.Africa has, however, established that the illegal trade is still rife on the Kiunga border point as traders still find ways to sneak and carry on with trading activities there.

But how is this taking place considering the border between Kenya and Somalia, particularly in Lamu, is fully under security surveillance?

Ali Omar, a famous miraa shipper from Lamu all the way to Kiunga and Somalia, says he finds it easy conducting such business provided he is in good terms with the security agencies in the area.

Mr Omar says he has been ferrying miraa to Somalia almost weekly.

"I have always ensured I equip myself with all the travelling documents, including National Identity cards. I carry between 30 and 35 sacks of miraa. I always tell the security agencies, including the marine police and Kenya Navy, that I am headed to Kiunga. Hardly do they know that I am going to deliver the consignment of miraa in Somalia," says Mr Omar.

He says the hardest part of his journey is when he reaches the Ishakani border where Kenya Defence Forces (KDF) soldiers are stationed.

"As experienced traders and sailors, we opt to use the deep seas which are less guarded. These are dangerous routes with rough tides but our hope has always been reaching Somalia safely and delivering the miraa, knowing very well that it's good money," says Mr Omar.

The boats ferrying the khat were headed to Somalia but were intercepted at Barakuda area, about 100 km from Lamu Island. The consignment was later torched.

Apart from miraa dealers, fishermen in both Lamu and Somalia have always ignored the ban on cross-border trade.

The fishermen, particularly from the Kenyan side, have found it easy to engage in business activities with Somalia without undergoing the necessary security checks.

Towns like Mogadishu, Kismayu, Puntland and Hirshabelle are the ones frequented by Kenyan fishermen and traders.

One of the fishermen, Ali Masoud, says they have taken advantage of the porous Lamu-Somalia border to move freely.

Mr Masoud says that at first, they adhered to the ban only for them to find out that miraa trade was going on.

"We strategise on how to manoeuvre on the border, though sometimes we get arrested and our consignment is destroyed. That has, however, not in any way stopped us from conducting the cross-border fishing trade," says Mr Masoud.

In April this year, 12 tonnes of dry fish worth over Sh5 million was destroyed by security agencies in Lamu.

The 761 bags of dry fish were impounded by a multi-agency security team shortly after it arrived at the Mokowe jetty in Lamu West from Mogadishu and Kismayu in Somalia. It arrived through the Kiunga border point in Lamu.

Lamu activist Ali Shebwana said that apart from the Kiunga border point, the government should also look into other border areas such as Ishakani, Mkokoni, Kiwayu and Madina as major loopholes being used by traders and fishermen going into and out of Somalia.

Lamu County Commissioner Irungu Macharia, on his part, said they were paying more attention to long-distance shippers who pretend to be operating within the region only to end up crossing into Somalia and back.

According to Mr Macharia, his office is aware that Lamu miraa traders and fishermen have secretly been crossing into Somalia to sell their goods and catch through Kiunga and Ishakani border points.

He noted that such individuals go as far as Kismayu and Mogadishu to sell or buy dried and fresh fish and back to Kenya.

Mr Macharia insisted that the Kenya-Somalia border remains closed and that those sneaking in and out are smugglers.

"We have done our best to secure the border. We are investigating the smuggling claims and we intend to arrest and charge all those found. We shall also destroy everything we impound. The border remains closed," said Mr Macharia.

Kenya Ports Authority (KPA) Senior Superintendent in charge of the Lamu Jetties, Abdishukri Osman, noted that the cross- border smuggling needs to be stopped completely as it will directly hurt revenue collection in Kenya, especially with the coming new Lamu Port South Sudan Ethiopia Transport (Lapsset) at Kililana in Lamu.

Mr Osman said their emphasis has been on legal trade and compliance with the existing Harbour Regulations Act for all vessels that cross the border.

"These include notification of the arrival of the vessel by an appointed agent, declaration of crew and cargo as well as ensuring that all the involved parties have the necessary documents and permits like Kenya Revenue Authority (KRA), KMA, fisheries or Kentrade," said Mr Osman.

He said: "We want to instill best ethical practices in our people. Lamu Port's objective is to support fishing businesses with proper and effective infrastructure in place that will ultimately promote the business. But this has to be done legally." said Mr Osman.

As for Lamu traders, fishermen and locals, their hope still remains that the border will one day be reopened so that normal businesses resume and save their trade and other activities.