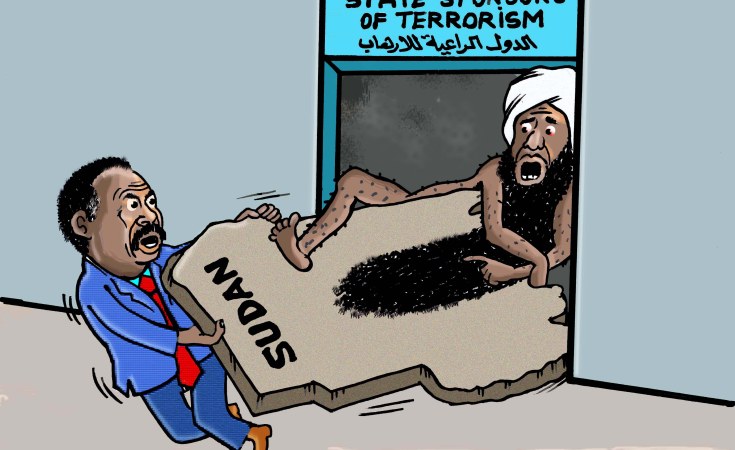 Omar Ahmed
Sudan’s PM Hamdok attempts to remove Sudan from the US list of State Sponsors of Terrorism while an Islamist fundamentalist (remnant of the old regime) holds it back.
Legalbrief (Cape Town)

A troubled East African nation that has long been regarded as a major sponsor of international terrorism now finds itself playing a pivotal role in the dramatic Middle East peace negotiations. Legalbrief reports that Sudan, which once served as the headquarters of Osama bin Laden's al Qaeda terrorist network and backed Hamas and other Palestinian militant groups, appears to have turned the page.

And on Saturday Prime Minister Abdallah Hamdock addressed the nation as it celebrated the first anniversary of the start of the uprising that toppled long-time ruler Omar al-Bashir. Hamdock last week announced that funds to compensate the families of the victims of the bombing of the destroyer USS Cole in Yemen in 2000, and the 1998 bombing of the US embassies in Dar El Salaam in Tanzania and Nairobi in Kenya have been raised.

D a bang a reports that Hamdok said this would ensure that Sudan was removed from Washington's list of State Sponsors of Terrorism. The agreement contains clauses that protect the government from any future claims. In a 2019 ruling, the US Supreme Court prevented US sailors injured in the deadly al-Qaeda bombing in 2000 of the US Navy destroyer USS Cole from collecting $314.7m in damages from the Government of Sudan for its alleged role in the attack.

However, the judgment rested more on a legal technicality than exonerating Sudan. In the ruling, the justices agreed with Sudan that the lawsuit had not been properly initiated in violation of US law because the claims were delivered in 2010 to the Sudanese Embassy in Washington rather than to its Minister of Foreign Affairs in Khartoum. Hamdok did not reveal the amount of the compensation and Washington has yet to respond. Full Dabanga report

A report on the MSN site notes that Hamdok has emphasised that Sudan does not want to link its removal from the terrorism list with a normalisation of relations with Israel. 'This topic (ties to Israel) needs a deep discussion of the society,' he told a conference in Khartoum.

Sudan's surging inflation and plummeting currency have been the biggest challenges to Hamdok's transitional administration, which rules with the military since al-Bashir's ouster. Sudan was put on the US list in 1993 because Washington believed al-Bashir's Government was supporting militant groups. But many in Sudan consider this is undeserved since al-Bashir was removed last year and Sudan has long cooperated with the US on counter-terrorism.

During a video statement to the UN General Assembly on Saturday, Hamdok said Sudan was actively cooperating with international and bilateral efforts to fight terrorism and terrorism financing. 'Sudan's name should be removed from the list of countries that are sponsoring terrorism. Sudan has returned to the international fold after 30 years outside it. This must happen,' he said. 'We hail the efforts of the US Government and the US Congress to remove Sudan's name from the list,' he said.

However, The New York Times reports that Sudanese officials are divided on the merits of recognising Israel, and some officials have warned that a hasty, American-backed deal could ignite a destabilising backlash that might scuttle the country's precarious transition to democracy. Full MSN report   Full report in The New York Times

On its merits, the US-Sudan agreement is a straightforward proposition, notes Daniel DePetris in a Washington Examiner analysis.

However, the Israel normalisation issue and the terms of the final monetary settlement are holding up the deal. Despite US Secretary of State Mike Pompeo's urging, senior lawmakers are opposed to granting immunity to Sudan. Doing so would take away the right of others, such as the families of those who died on 9/11 to pursue their own claims against Sudan in court.

' Whatever the justifications for the Trump administration's sudden interest in Sudan, the African country has been making improvements on counterterrorism. The State Department's annual terrorism report assesses that Sudan has taken steps to work with the US on counterterrorism and that the Sudanese Government continued to pursue counter-terrorism operations alongside regional partners, including operations to counter threats to US interests and personnel in Sudan. This is a far cry from the days when al Qaeda was stomping around Sudan unencumbered.' Full Washington Examiner analysis

U.S. Removes Sudan From Terror Sponsors List
Tagged:
Copyright © 2020 Legalbrief. All rights reserved. Distributed by AllAfrica Global Media (allAfrica.com). To contact the copyright holder directly for corrections — or for permission to republish or make other authorized use of this material, click here.