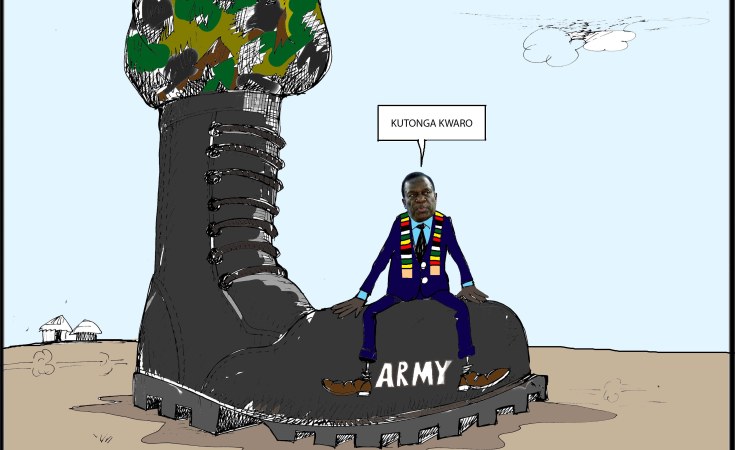 A report by the Zimbabwe Democracy Institute (ZDI), a local think-tank organization has revealed that militarization of the state worsened during President Emmerson Mnangagwa's reign.

In a report titled 'Transition Politics In the Post-Mugabe Era' , ZDI says citizens have been made to fear the military thereby hindering them from exercising their constitutional rights.

"The study revealed that militarisation has worsened in the Mnangagwa era. Citizens have been made to fear the military and thus being deterred from exercising their constitutionally given rights. The study revealed that the post Mugabe dispensation government has put much military effort on the electoral process and the exercise of the freedom of protest and media as key military blocked of transition in Zimbabwe," reads the report

According to the ZDI study transition politics in the country rely on six umbilical codes that include the electoral process, the process of exercise of the right to media and protest, the judiciary, legislative and the politics of the farms process.

"In these six centres of transition politics, the study found that the voice of the military is supreme. The electoral process was identified as the most recognised enabler of political transition in Zimbabwe. Findings also show that citizens have experienced a dramatic intensification of militarisation, deployment of naked force and intimidating deterrence in all key centres of transition politics in Zimbabwe," further reads the report.

ZDI recommended that human rights and democracy defenders must work to engage regional and international bodies to raise the price of continued militarisation.

"Human rights and democracy defenders must endeavor to internationalize the transition problem in Zimbabwe by lobbying regional and international bodies to raise the costs of continued militarisation in Zimbabwe.

"Concerted efforts should be targeted at bursting the role of the military in key enabling processes such as the electoral environment, the protests, the media, the farms and the judiciary. Advocacy and lobby and national and international level should seek to address the militarisation and exposure of brutality in these transition pressure points" noted the ZDI report

The think tank organisation called on military leadership to condemn and publicly oppose all acts of political manipulation and violence that threaten the longevity of peace in the country without taking sides.