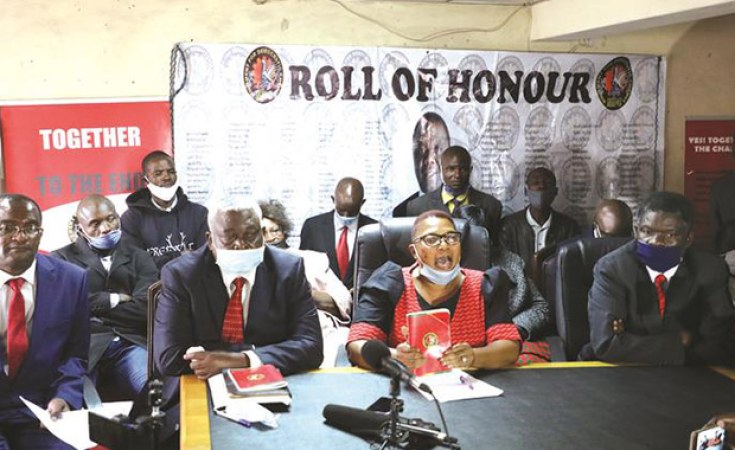 WARRING MDC factions should not be near the levers of power as they are disposed to turn the peaceful political landscape into a war zone, a former opposition top official and insider has said.

The revelation by the former top official comes in the wake of unruly MDC-A youths who on Sunday illegally occupied the Harvest House, in direct violation of the Supreme Court ruling that restored power to a faction led by Dr Thokozani Khupe.

It also comes as the country's security services on Monday warned of a plot by the opposition, working with Western nations, to trigger chaos in the country to reverse the outcome of the 2018 elections.

On Monday, youths aligned to the Chamisa faction went on a rampage in Harare's central business district (CBD), blocking traffic as they fought running battles among themselves, not only in violation of the current Covid-19 lockdown measures, but also the rule of law.

And amid the deepening factional fights that are fed by greed, and the flagrant abuse of due processes in the opposition movement, former spokesperson of the MDC, Mr Obert Gutu, described his former allies as a "group of foolish flies that are following a corpse into the grave".

"This is a race to the bottom. All the various MDC factions that are currently involved in this blood-letting and self-cannibalisation are losers because there are no winners in a race to the bottom. In fact, there's absolutely no method to this madness. The MDC as a viable and strong opposition political party is now history.

"It's dead and buried. Trust me. Maybe from the ashes of the MDC will emerge various political parties, but the chances of a reconciliation of all these various antagonistic factions are virtually zero," said Mr Gutu.

Since its formation in 1999, at the behest of white former farmers and some Western capitals, the MDC has suffered several splits as competition for resources from their handlers has often caused divisions and insatiable avarice.

The MDC has had splits more than three times, notably in 2005, when Professor Welshman Ncube led a faction (MDC-N) away from the late Morgan Tsvangirai outfit, then in 2014 when Mr Tendai Biti left to form his own People Democratic Party (PDP) in 2014 and in 2018 Mr Chamisa violently grabbed power from Dr Khupe after the death of founding leader Morgan Tsvangirai, leading to an acrimonious fall out.

Although both Mr Biti and Prof Ncube have on paper reunited with the Chamisa faction, there is growing disquiet among their respective supporters who are aggrieved by the bossy manner in which Chamisa is handling the MDC-A, which is now on the verge of yet another split.

"There is a by-election that is coming and instead of picking a candidate from the Ncube faction, Chamisa has provided a slate of his loyalists, completely disregarding the 2018 electoral pact where the Kuwadzana seat was reserved for the Ncube faction," said one top MDC-A member.

Failure by the Chamisa faction to have its way often leads to violence as was seen yesterday, Mr Gutu said, adding that the opposition party has within its ranks activists who can be described as terrorists.

"The culture of intolerance and violence has ultimately led to the complete disintegration of the MDC. The ghost of violence and vile intolerance has been festering within the MDC for a very long time. Anyone who harbours a different view from the violent so-called Vanguards and their scheming handlers is branded a traitor and a sell-out who must be beaten up if not killed.

"In reality, the Vanguards are an indiscipline, intolerant, drunken and extremely violent militia routinely unleashed by some top leaders within the MDC Alliance faction to cause anarchy and mayhem.

"The Vanguards are, in every respect, akin to a terrorist organisation. The judiciary is unfairly accused of being captured each time that they hand over judgments that are unfavourable to the Vanguards and their handlers. When the judiciary hands out judgments favourable to these people, their silence is deafening. These thugs can't be trusted with State power lest Zimbabwe will quickly degenerate into a violent war zone," said Mr Gutu.

It's Not About the MDC Alliance Name - Mahere