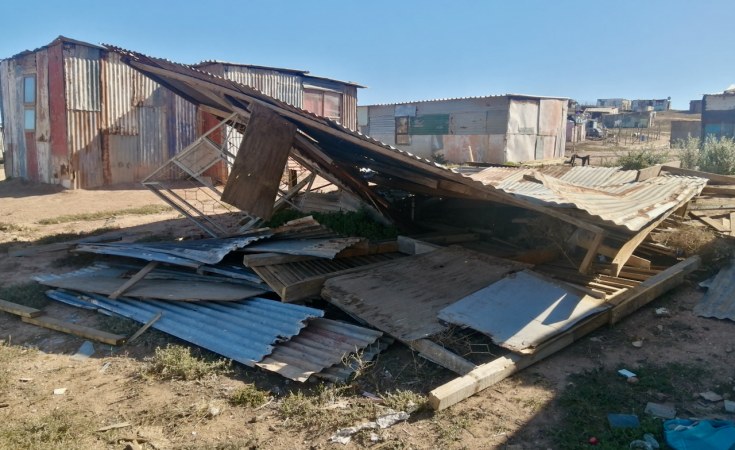 Kanana informal settlement was formed when people moved from Westville in the hope of getting services sooner.

18 shacks belonging to people who did not come from Westville were demolished by angry Kanana residents on the weekend.

Demolitions came after residents were told that the additional occupiers were the reason for no formal electrification.

The newcomers were accused of buying their sites from previous committee members.

The decision was taken on Friday at a public meeting called by the new Kanana committee.

People were angry after they were told by the committee that the reason they could not get electrification was because additional people had moved into the area.

In 2018, 113 households left Westville because of a lack of electricity and basic service and moved to sites in Kanana. They thought Kanana would get services sooner as some basic infrastructure had already been put in place at its municipal stands.

Sipho Ntsondwa, chairperson of the Nelson Mandela Bay Municipality Informal Settlements Forum, said they disbanded the old [Kanana] committee "after we were informed that they were selling the sites [to people not from Westville] in Kanana from R8,000 to R12,000".

He said at a meeting last year in March in the city hall, a verbal agreement was reached between former Mayco Member for Infrastructure and Engineering Andile Lungisa, Mayco Member for Human Settlements Andile Mfunda, and the Westville and Kanana committees that the 113 shack dwellers from Westville will remain in Kanana.

He said they agreed they would get toilets and electricity "but should not allow other people from other areas to occupy those sites".

He said allegations of selling of the sites were revealed at a meeting earlier this month with the Westville and Kanana committees and the ward councillor. He said the Kanana committee was reminded to "honour that verbal agreement we had with Lungisa".

Nobuhle Makapela, a member of the old committee, said, "I am shocked and hurt to see the people's houses being demolished like this with their furniture inside. They could have been skipped [for electricity] without demolishing their shacks ... What is even worse, some of them were not even at home when their shacks were demolished."

"I never saw anyone buying a site from our committee members. I just heard those rumours," said Makapela.

But a woman, whose shack was demolished said, "I arrived here last year from Soweto-on-Sea. An old committee member asked for R4,500 ... also asked another R4,500 from my brother-in-law ... also my neighbour was charged R3,500." Because she had illegally bought her site she did not want her name revealed.

Makapela said that at the outset they had battled to get water, toilets and electricity, and the community had agreed to approach people in other wards to increase their numbers and so put pressure on the municipality to supply services.

Ward 36 Councillor Nomonde Mhlobiso (ANC) said, "When they invaded Kanana the municipality let them stay there and warned them not to allow other people to occupy those municipal serviced sites ... But they chose to sell one another the sites. Now they are fighting and they want me to intervene. They must come forward and report the corrupt community members who sold them the sites."

"The land belongs to Mzingisi Development Trust but is serviced by the municipality," he said.

Municipal spokesperson Mamela Ndamase said the City "strongly discourages" any land invasion but also the "eviction of people by other residents".

She said, "The City's electricity department would not be able to electrify formalised land which has been invaded."