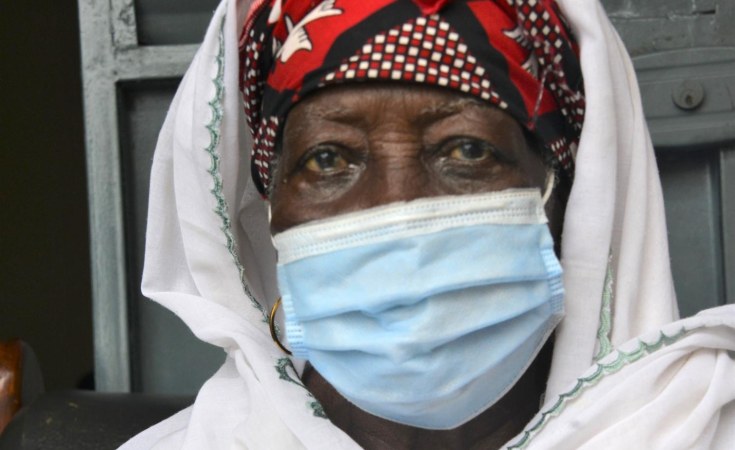 WHO Africa
When Bagama Guehara walked out of Donka Hospital in Guinea’s capital, Conakry, on 7 July this year, leaning on a walking stick for support, she was met with rapturous applause from the medical staff and fellow patients. At 99, Guehara is the oldest person to have tested positive for Covid-19 in Guinea since the country’s first positive case was detected on 13 March 2020.
allAfrica.com
By Nontobeko Mlambo

Analyses by researchers at the African Centre for the Constructive Resolution of Disputes (Accord) warn that Covid-19 has provoked responses that violate human rights, slow effective responses to the pandemic and, ultimately, threaten peace.

"According to data captured in the Accord Covid-19 Conflict and Resilience Monitor data set to date" write Nontobeko Gcabashe and  Rumbidzaishe Matambo, "22 out of the 55 African Union member states have reported incidents of stigmatisation and discrimination due to Covid-19." Rumbidzaishe is an intern in Accord's peacekeeping unit, and Gcabashe is a programme officer in  peacebuilding and local and national capacities for peace .

Accord special advisor Ambassador Said Djinnit worries about the erosion of Africans seeking solutions to African problems. "Over the past few years," he writes, in an analysis, "external influence in African conflict situations has increased." and says that the Covid-19 crisis has disrupted Africa's peace and security agenda. "This trend has deepened during the Covid-19 pandemic." As prospects of a vaccine kindle hope that Covid will wane across the continent, he concludes, "Africa should again seize the initiative in shaping its future relations."

Since the World Health Organisation declared COVID-19 as a 'Public Health Emergency of International Concern' in January, the virus has killed over a million people around the world. Because Covid-19 is a new virus, people are misinformed or have very little information about it - and scientists themselves are learning new facts about the virus every day. Just as reactions to people with HIV/Aids in the early 1990s were often fearful, causing those infected to avoid testing or disclosure of their status, the Covid pandemic has caused stigma and discrimmination. Some people who fear they are sick have been reluctant to seek help or medical attention.

After a possible new virus was first reported in Wuhan, China, people of Asian descent have been blamed blame for supposedly causing Covid-19. U.S. President Donald Trump fuels those stereotypes by referring to the virus as the "kung flu", "Chinese virus" or the "Wuhan virus".

Africans in China began to suffer similar discrimmination in April, when Chinese authorities in the southern city of Guangzhou began a campaign to forcibly test Africans for the novel coronavirus, and ordered them to self-isolate or to quarantine in designated hotels. Some landlords evicted African residents, and restaurants refused to serve them. This was after the state news agency Xinhua had reported that a Nigerian man with Covid-19 attacked a Chinese nurse who tried to stop him from leaving an isolation ward in a Guangzhou hospital. These reports of discrimination prompted more than 300 human rights groups and nearly 1,800 activists in Africa to pen an open letter to the African Union calling for "immediate remedial action" over the "xenophobic, racist and inhumane treatment of Africans in China".

To address the problem of social stigma and discriminatory behaviours against people of certain ethnic backgrounds, as well as against anyone perceived to have been in contact with the virus, the World Health Organization developed a guide to preventing and addressing social stigma associated with Covid-19. The guidelines highlight misconceptions, rumours and misinformation as some of the factors contributing to stigma and discrimination, which hamper response efforts.

"These incidents confirm that in times of crisis and uncertainty, people tend to look for scapegoats and activate a survival mode out of fear, misinformation and disinformation," say Gcabashe and Rumbidzaishe. "Although notable efforts have been made by governments and civil society organisations, still more needs to be done in raising public awareness against Covid-19-related discrimination, and people must acknowledge that this is a worldwide pandemic affecting anyone, regardless of race or culture."

The survey they used was conducted between March 29 to April 17, 2020 in 28 cities across 20 African Union member states by the Partnership for Evidence Based Response to Covid-19 (PERC). It found that across urban populations surveyed, there was widespread awareness of Covid-19 and its symptoms. But the data also indicated systematic gaps in knowledge. One of eight - 13 percent - of respondents were unaware that infected people may not show symptoms until 5-14 days after being infected.

"Many individuals who have recovered from the virus continue to face stigmatisation and discrimination," Gcabashe and Matambo wrote. "In the Democratic Republic of the Congo, survivors battle against people's denial of the virus and stigmatisation. People who have recovered from the virus have been threatened and shunned in their communities. They face constant suspicion that they may spread the disease. A Covid-19 survivor reported that their children were nicknamed 'Covid' or 'Corona' in the neighbourhood, and stated that this kind of treatment drives people into hiding,"

In South Africa, the first positive case was of a 38-year-old man from KwaZulu-Natal who had contracted the virus while on holiday in Italy. At that point, many people from the poor townships saw the virus as an illness of the wealthy who are able to travel. As it started spreading to some townships more people who had tested positive started experiencing discrimination as a result of the stigma associated with the virus. In Khayelitsha, a township in Cape Town, the family of a woman who contracted the virus said they experienced abuse, including hateful social media posts and voice notes. Some people experienced discrimination even within their families. A woman who tested positive in Mpumalanga province in eastern South Africa was forced to leave home, and her family left her clothes outside. In fear of being victimized, she left the area.

While the world has shown appreciation for frontline workers, praising them for risking their lives to save others, in Malawi that was not the case for some healthcare workers. A nurse in Malawi said she struggled to get into a bus, citing abuse by passengers who feared they would be infected by sharing a vehicle.  As a result, nurses were hesitant about wearing their uniforms in public.

Stigma surfaces in times of crisis and uncertainty, and it undermines efforts to prevent and treat health conditions. To reduce the damage to outbreak control, there is a significant need for interventions to change people's attitudes. Governments, non-governmental organizations and civil society at large have a pivotal role to play. It is important that those in power - and in media - use appropriate language to describe Covid-19 and speak out against stigma.

"Lessons can be drawn from Africa's fight against the stigma attached to HIV/Aids through community mobilisation – although the threat posed by Covid-19 is different, because it is highly contagious [by proximity alone]" say Gcabashe and Rumbidzaishe. " As such, non-physical engagements can be undertaken using a variety of media platforms to call for solidarity and to contribute to changing people's attitudes towards those who are at risk of discrimination. And those who have recovered from Covid-19 can be the face of hope to those still having doubts about the virus."

Africa Cannot Silence The Guns If Women Are Excluded
Tagged:
Copyright © 2020 allAfrica.com. All rights reserved. Distributed by AllAfrica Global Media (allAfrica.com). To contact the copyright holder directly for corrections — or for permission to republish or make other authorized use of this material, click here.