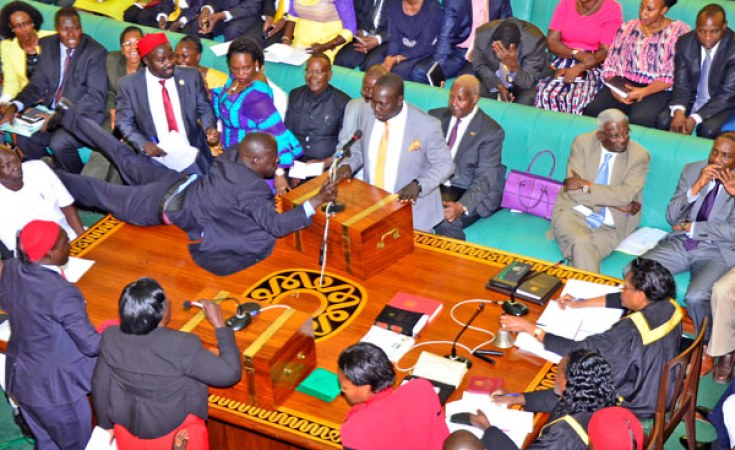 The East African Court of Justice on Wednesday dismissed with costs the case that Ugandan lawyer Hassan Male Mabirizi filed challenging Parliament's amendment of the Constitution which removed the presidential age limit of 75.

In a unanimous verdict of the Arusha-based court led by Principal Judge Monica Mugenyi, the three-judge panel dismissed Mr Mabirizi's submission that the violence exhibited in Parliament during the tabling of the age limit Bill should invalidate the legislation process.

The justices also ruled that there was no violation of the East African Treaty committed by the Supreme Court of Uganda in regard to the judicial ethics and process.

"... ... .More importantly, we are disinclined to agree with the applicant (Mr Mabirizi) that violence in the House would vitiate the parliamentary proceedings... We therefore decline to vitiate the parliamentary proceedings. The upshot of the court's determination of this case is that the reference is hereby dismissed with costs to the respondent (AG)," the judges ruled.

The other justices of the court were Charles Nyawello and Charles A Nyachae.

Mr Mabirizi had appealed to the court that the Uganda government amended the presidential age limit clause (102b) through violence and deployment of police and military personnel in and outside Parliament, among other misdeeds, which he said were unconstitutional. He wanted the regional court to quash the amendment.

He also stated that the same age limit amendment was done without complying with the strict procedures contained in the Constitution, Acts of Parliament and Rules of Procedure of Parliament.

He asked the regional court to reinstate the removed article on the presidential age limit.

On September 21, 2017, when the constitutional amendment Bill of 2017 was due to be debated by Parliament, Opposition MPs and some counterparts from the ruling party opposed the amendment by repeated singing of the national anthem.

The Speaker of Parliament, Ms Rebecca Kadaga was forced to adjourn the House to September 26.

However, on that date when the Constitutional Amendment Bill was again due for consideration, the House became rowdy and was consequently adjourned to the following day.

Upon resumption of the parliamentary sitting, the leader of the Opposition in Parliament, led some MPs out of the House and the motion for the age limit amendment was moved.

The mover of the motion, Mr Raphael Magyezi (current Local Government minister) tabled the Bill but amid fist fights between Opposition MPs and security forces who had entered Parliament.

The Constitution was eventually amended. The petitioners went to court but both the Constitutional Court and Supreme Court upheld the amendment on a split majority decision of the judges.

Reacting to the verdict, Mr Mabirizi said he was going to appeal the court's decision.

Mr Rogers Mulindwa, the senior manager for communication and public relations at the NRM Secretariat, congratulated the President upon the court victory.

"It has not come by surprise because there was no injustice in the whole legislation process. When Ugandans decide to make changes in the Constitution, they should own it," Mr Mulindwa said last evening.

Museveni's 2021 Candidature to Be Determined Today By EA Court