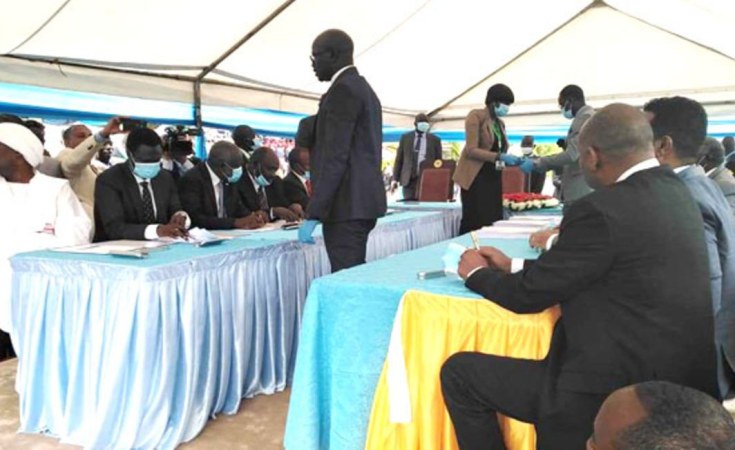 Allan Chekwech/Daily Monitor
The 13 rebel factions prepare for the signing of the Sudan Peace Agreement in Juba, South Sudan, on October 3, 2020.
Dabanga (Amsterdam)

Juba — The peace agreement between the Sudanese government and the members of the Sudan Revolutionary Front (SRF) rebel alliance will be signed in the South Sudanese capital Juba today with a strong local, regional, and international presence.

The member groups of the SRF initialled a peace agreement with the Sudanese government in the South Sudanese capital Juba on August 31. The agreement includes eight protocols for the five tracks (Darfur, the Two Areas, central Sudan, eastern Sudan, and northern Sudan) that have been the subject of a year-long negotiation.

The signing ceremony will be attended by the South Sudanese President, Lt Gen Salva Kiir, the president of Sudan's Sovereign Council, Lt Gen Abdelfattah El Burhan and Prime Minister Abdallah Hamdok, the heads of state of Chad, Uganda, Kenya, Djibouti, and Somalia, the Chair of the African Union Commission, the Egyptian Prime Minister, the Secretary General of the Arab League, the Minister of Foreign Affairs of Qatar, the UAE Minister of Petroleum and the Saudi Minister of State, as well as envoys of the Sudan Troika (USA, UK, and Norway), and the US Special Envoy to Sudan.

The South Sudanese mediation team and the negotiations delegation of the Sudanese government, chaired by Lt Gen Mohamed Hamdan 'Hemeti, Vice President of the Sovereign Council and Commander of the Rapid Support Forces, and the delegation of the SRF*, headed by El Hadi Idris, completed final arrangements for the signing of the peace agreement at the Pyramid Hotel in Juba today.

Upon his arrival in Juba, PM Hamdok told reporters that the comprehensive peace agreement will "open a new page that ends wars and puts an end to the suffering of our people in displacement camps."

"The peace building process faces various challenges and pitfalls that we can overcome through concerted efforts and joint action", according to Hamdok, who explained that today also represents a demonstration of cooperation between Sudan and South Sudan.

Jibril Ibrahim, SRF Secretary-General and Head of the Justice and Equality Movement (JEM), described the day as an end to the war and a historic day for Sudan.

After a meeting with Hamdok yesterday, Ibrahim said that moving forward there will be a focus on post-peace steps and procedures to implement the peace agreement, in light of current difficult living conditions for the average Sudanese citizen, including widespread flooding, and Sudan's external relations.

SRF chairman and head of the Sudan Liberation Movement-Transitional Council (SLM-TC) El Hadi Idris, announced the transformation of the SRF alliance after today. Its leaders will return to Sudan to work together with the transitional government and political forces in the country to achieve stability and development, and implement the peace agreement.

He said that Hamdok is optimistic about the SRF leaders who will participate in the government, explaining that their "foreign and diplomatic relations" will benefit the country and "bring it out of international isolation".

On Thursday, Sudan Prime Minister's Advisor for Peace Affairs, Juma Konda, said that delegations will continue to arrive in Juba. They will come from all over Sudan, and especially Darfur, South Kordofan, and Blue Nile state will have significant representation as those states have a great stake in the peace agreement.

Konda stressed that "efforts will continue" to create a comprehensive peace agreement, stating that they "the rest of the armed struggle movements to join in the next few days".

Sudan People Liberation Movement-North faction in Blue Nile state under the leadership of Malik Agar (SPLM-N Agar) affirmed that Sudanese, African, and all people are happy with the peace agreement.

SPLM-N Agar Secretary-General Yasir Arman stressed that what happens now will open the door for the peace process to be completed once and for all. He called on parties to "use peace in a strategic rather than tactical manner" in order to create a strong, effective, and supportive transitional phase.

A number of SPLM-N Agar supporters in Blue Nile state said that signing the peace agreement will contribute to creating a new atmosphere for the next stage of the transition. The supporters said that it could provoke leaders to make additional efforts to find radical solutions to ongoing issues in Sudan.

Minni Minawi, Chairman of the split-off Sudan Liberation Movement-MM, suggested in a meeting with Hamdok yesterday that the UNAMID mission should continue due to the importance of ensuring security in Darfur.

He said that the absence of UNAMID makes the region "lose its capability" to ensure the return and safety of displaced persons and refugees. He called on the government to change it's stance on the UNAMID exit.

Minawi said that the meeting with Hamdok also dealt with a number of peace agreement issues, especially security and humanitarian aid for displaced people.

The Forces for Freedom and Change (FFC) said that today is the first stage to achieving comprehensive peace. The real challenge lies in the implementation of the peace agreement matrix.

Ibrahim El Sheikh, FFC leader and former president of the Sudanese Congress Party said that great efforts are being made to overcome all obstacles that will face the implementation of the peace agreement, stressing the need for the other peace parties to be aware of the negative effects of scarcity of resources and to appreciate the harsh conditions the country faces at the moment.

A number of people in Darfur and Blue Nile state told Radio Dabanga that they welcome the final peace agreement to be signed today in Juba, calling on the leaders of the holdout armed movements, the mainstream Sudan Liberation Movement under the leadership of Abdelwahid El Nur (SLM-AW), and the Sudan People Liberation Movement-North faction in South Kordofan and parts of Blue Nile state, led by Abdelaziz El Hilu (SPLM-N El Hilu), and a number of smaller Darfur rebel groups to join the peace process for stability and security.

However, in North Darfur, displaced community leader Mohamed Abdallah said that the Juba Peace Agreement does not differ much from the previous agreements and does not include all armed struggle movements. He demanded that the agreement "includes the real stakeholders, those really affected by the war".

Ehab El Tayeb, leading member of the the Darfur Revolutionaries Group in North Darfur, called for the need to "unite the ranks". He said that many people have a narrow view of the peace process, which can get in the way when discussing how to bring about sustainable development.

The US Special Envoy to Sudan, Donald Booth, said he would continue to work with the government to urge non-signatories to participate in reaching a comprehensive peace in Sudan.

The envoy added, during his meeting in Juba yesterday with the Sudanese government delegation headed by Hemeti, that he is in contact with both El Hilu and El Nur about returning to the negotiating table.

The US special envoy to Sudan described his meeting with the government delegation as fruitful and beneficial, especially in regard to the role of the international community in following up the implementation of the agreement.

The international community has largely reacted positively to the agreement, with the USA, the United Kingdom, and Norway (the Troika), as well as the European Union and the African Union-United Nations Mission in Darfur (UNAMID), all issuing statements welcoming the accord on August 31.

*The Sudan Revolutionary Front (SRF) alliance, formed in the end of 2011, consists of the Sudan People Liberation Movement-North faction in Blue Nile state under the leadership of Malik Agar (SPLM-N Agar), and five Darfur rebel groups: the Justice and Equality Movement (JEM), the Sudan Liberation Movement faction under the leadership of Minni Minawi (SLM-MM), the SLM-Transitional Council, the Sudan Liberation Forces Group, and the Sudanese Alliance, which includes 15 smaller rebel factions. The SLM-MM withdrew from the SRF alliance in May 2020, and set up a second SRF faction that nevertheless continued with the peace talks. The JEM faction led by Bakheet Abdelkarim (aka Dabajo) joined Minnawi's new alliance in early June.

Next Story
Tagged:
Copyright © 2020 Dabanga. All rights reserved. Distributed by AllAfrica Global Media (allAfrica.com). To contact the copyright holder directly for corrections — or for permission to republish or make other authorized use of this material, click here.