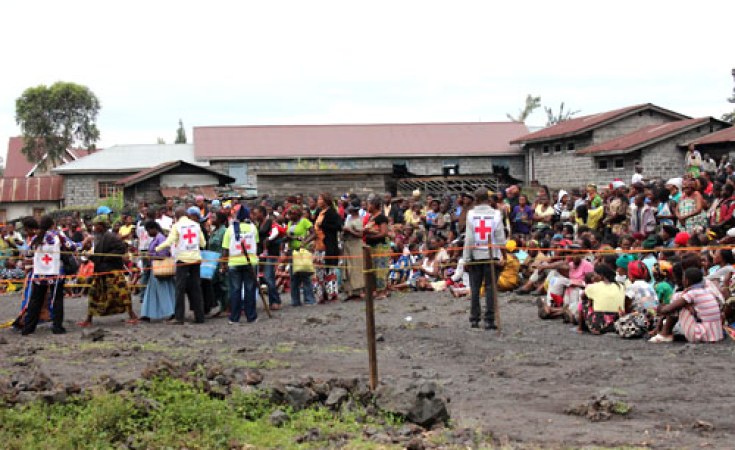 Also taking the floor were the following non-governmental organizations : Christian Solidarity Worldwide, World Evangelical Alliance, Institute for NGO Research, Next Century Foundation, International-Lawyers.Org, International Organization for the Elimination of All Forms of Racial Discrimination, and Health and Environment Program.

MICHELLE BACHELET, United Nations High Commissioner for Human Rights, encouraged the Government of the Democratic Republic of the Congo to implement the recommendations of her report with regards to the need to fight impunity, establish transitional justice processes, and conduct broad reforms to continue opening up democratic space. As the report documented, the impact of armed conflict on the people was deep and increasing. Several reports pointed to incidents that may amount to war crimes or crimes against humanity. Armed groups were largely responsible for the increasing abuses and violations recorded by her office. As a result of this climate of violence, destruction and fear, some 5.5 million people had been internally displaced. It was essential to step up efforts to bring the perpetrators of these severe human rights violations to justice. She encouraged the Government to work with all stakeholders, particularly in the eastern provinces, to address the causes of hatred and violence. She gladly reported the continuing opening up of democratic space in the Democratic Republic of the Congo, with an overall decrease in recorded violations of civil and political rights. The outbreak of COVID-19 had led to excessively heavy-handed enforcement of restrictions on the freedom of movement, and unwarranted and excessive use of force, inter alia, which could hamper the establishment of public trust in, and compliance with, public health efforts.

BACRE WALY NDIAYE, Chair of the Team of International Experts on the situation in Kasai, presenting the Team's report, said Kasai continued to suffer from socio-political crises, and the humanitarian crisis was a threat to security and the enjoyment of human rights in the region. One of the major issues that required vigilance was impunity. He welcomed the progress achieved by military justice as well as the creation of commissions of inquiry and the questioning of people in July in that context, and noted that after the publication of the report of the Team of International Experts, a parliamentarian suspected of human rights violations had been charged. Despite this progress, the challenge of combatting impunity was a major one which was not being addressed fully. The case of the killing of two United Nations experts, and the disappearance of their Congolese escort had yet to be elucidated.

ANDRÉ LITE ASEBEA, Minister of Human Rights of the Democratic Republic of the Congo, said the Congolese State intended to continue the fight against impunity, serious crimes and corruption by strengthening the role of the judiciary. Military justice continued to score points against impunity with exemplary sentences. On the other hand, there had been positive developments in Kasai : many of the presumed culprits had been apprehended as part of the investigations into the assassination of two United Nations experts and their Congolese guide. On the security front, measures combining diplomacy, socio-political dialogue and military pressure were underway to stabilize the eastern part of the country. Finally, despite COVID-19, which had hardly spared the Democratic Republic of the Congo, efforts were being made by the Government to stabilize the macroeconomic framework and the fight against corruption. Classes would resume shortly with rigorous health regulations, the Minister concluded.

EMMANUEL KABENGELE KALONJI, National Coordinator of the Réseau pour la Réforme du Secteur de Securité et de Justice (RRSSJ), sounded the alarm in favour of the forgotten victims of serious human rights violations committed in the Democratic Republic of the Congo for more than 20 years, the perpetrators of which had been identified in various United Nations reports. On transitional justice, he said that peoples who forgot their past condemned themselves to re-live them. It was more than urgent to create an International Criminal Tribunal for the Democratic Republic of the Congo to fight impunity for these serious crimes. The security sector must also be completely reformed.

Speakers welcomed the commitment of the Congolese Head of State and his Government in favour of the greater participation of women, on an equal footing with men, in matters related to peace and security, as well as in conflict prevention and resolution and in peacekeeping operations. While welcoming recent improvements in Kasai, speakers were deeply concerned about the deteriorating situation in the eastern part of the country, especially in Ituri. The murders of United Nations experts Zaida Catalán and Michael Sharp in 2017 must be fully and thoroughly investigated and those responsible brought to justice. Some speakers said that the Council should condemn the imposition of unilateral sanctions, which did not help the Democratic Republic of the Congo and violated the human rights of its population.

Expressing appreciation for the inclusive fashion of consultation that the Government had undertaken in the process that would lead to the creation of the legal framework for transitional justice and reparation for the victims, speakers appealed to the international community to redouble its technical assistance to the country. The significant decrease of attacks and direct acts of violence between government forces and armed groups in the region was noteworthy. However, it remained concerning that armed groups, including the Kamuina Nsapu and Bana Mura, continued to perpetrate attacks against the region's population.

MICHELLE BACHELET, United Nations High Commissioner for Human Rights, said that to end militia actions, a credible disarmament, demobilization and reintegration was required, as well as efforts towards combatting impunity and enhancing civilian mechanisms, such as early warning and rapid response.

BACRE WALY NDIAYE, Chair of the Team of International Experts on the situation in Kasai, said the United Nations Organization Stabilization Mission in the Democratic Republic of the Congo and military justice had made it possible to achieve a lot of progress in combatting impunity. It was important to render justice, not just against the militia, but also against members of the security forces who had violated human rights.

EMMANUEL KABENGELE KALONJI, National Coordinator of the Réseau pour la Réforme du Secteur de Securité et de Justice (RRSSJ), said that, in order to address violations, a key point was to reform the security sector. While acknowledging that there was theoretical political will, it was important to affect changes in reality.

YAO AGBETSE, Independent Expert on the situation of human rights in the Central African Republic, presenting his report, said that COVID-19 represented an additional threat factor for the population of the Central African Republic. It reinforced concerns of marginalization, discrimination, exclusion and stigmatization. It was therefore important that restrictions be in line with the law. Mr. Agbetse called for the implementation of the Peace Accord and demanded an immediate ceasefire in order to allow a peaceful and inclusive electoral process. The various human rights abuses and violations documented during the period under review included murders, death threats, conflict-related sexual violence, cruel, inhuman and degrading treatment, arbitrary deprivation of freedom, confiscation of property, destruction and looting of property, kidnappings, attacks on humanitarian personnel, hospitals and peacekeepers, denial of humanitarian aid, and recruitment of children into armed groups. Several armed groups continued to occupy school and hospital infrastructure, depriving local populations of access to education and health care, including in the context of COVID-19. The fragile security situation had worsened the humanitarian situation in the country and triggered the forced displacement of populations from areas of active fighting to areas considered relatively calm.

Central African Republic, speaking as a concerned country, said that unfortunately armed groups continued to carry out terrible actions such as crimes and kidnappings. Despite the Government's goodwill, certain armed groups were going into liberated areas to provoke the Government. The Government needed help to sort things out and stop the armed groups from harming the population. Every possible measure needed to be taken to stop the violence, which could undermine the forthcoming elections. While it was impossible to know what the future held, the Government was working hard to prepare for the elections and prevent violence or anything that could disrupt them. The international community must help the Government to combat impunity effectively. The law enforcement agencies had to be strengthened to stop the armed groups. Every year, the Government was led to believe its complaints would be taken into account. Beyond the usual rituals and speeches, a new paradigm was needed. The Central African Republic had suffered too much.

A year and a half after the adoption of the Political Agreement for Peace and Reconciliation, speakers regretted that it had only been partially implemented. All parties must ensure the holding of free, transparent and inclusive elections and refrain from any attempt at destabilization. How could the armed groups be prevented from threatening the population in the weeks leading up to the elections? Speakers saluted the law establishing the Commission on Truth, Justice, Reparations and Reconciliation, and called on the authorities to take the necessary measures to ensure women representation among the 11 Commissioners and respect the Parity Law of 35 per cent. Speakers said that members of armed groups were often identified as perpetrators of rape and other forms of sexual violence, notably against children. The closing of schools made children more vulnerable to recruitment by armed groups and traffickers. Speakers, while thanking international partners for their support, called on donors to help the Central African Republic address the budget deficit that stemmed from the COVID-19 pandemic. Some speakers reaffirmed the territorial integrity of the Central African Republic. Several women incarcerated in Bimbo were accused of practices of charlatanism and witchcraft. And yet, neither the legislator nor the case law defined these offenses.

YAO AGBETSE, Independent Expert on the situation of human rights in the Central African Republic, said the Peace Accord was not fully implemented, above all by the armed groups. Pointing out that some armed groups had systematically violated the Accord, he urged the international community to provide additional support to the bodies working at the local level to implement it.

For use of the information media; not an official record

Wanted Warlord in DR Congo Still Preys On Civilians
Tagged:
Copyright © 2020 United Nations Human Rights. All rights reserved. Distributed by AllAfrica Global Media (allAfrica.com). To contact the copyright holder directly for corrections — or for permission to republish or make other authorized use of this material, click here.