DEMOCRACY is indeed a game of numbers and any faithful sticklers to its tenets should appreciate the simple fact that elections and their outcome determine the structure and future of any country and also that no one, apart from the person with the mandate of the people can be their spokesperson.

Indeed, democracy is a rule of the majority and in the Zimbabwean context a rule by Zanu PF, a political party that won by a landslide the mandate to rule this country for the next five years.

Thus no one, rather than elected officials and their appointees, should be allowed to masquerade as a spokesperson of Zimbabwe, much worse to hostile nations such as the United States, a country which wrongly assumes the role of the world's prefect.

Therefore, it is refreshing to hear Government saying the Principles of the Patriot Bill, a piece of law which will impose stiff penalties on persons campaigning against the country through private correspondence with foreign governments and harming national interests, has now been completed.

Drawing from similar pieces of legislations such as the Logan Act in the United States which outlaws consorting with foreign nations against the State, the Patriotic Bill is a welcome legislation that will go a long way in instilling some sense of responsibility on the country's self-hating opposition parties that have a fixation with making people suffer so as to get into power.

The list of the opposition's transgressions against the people of Zimbabwe is almost endless, from calling for the imposition of sanctions on the country at the turn of the millennium, to asking for the US military intervention, to sabotage through the kudira jecha antics after losing polls, which is their wont and endless misery, to the latest attempts to smuggle guns and set-up so-called Democratic Resistance Committees that are, for all intents and purposes, violent militia groups.

Government has been more than lenient on these treasonous acts and now its noteworthy action is being taken to right those oversights.

Opposition leader Mr Nelson Chamisa and his Vice President Mr Tendai Biti have flown to the US to speak for the retention of the economic sanctions, an albatross rock that has cost Zimbabwe more than US$40 billion in investment and also donor support of over US$4 billion annually for over two decades.

Through their shameless unpatriotic acts, the leaders of the opposition have inflicted so much pain on Zimbabwe, with the effects reverberating across the country as Zimbabwe has to go it alone with no access to lines of credit from Bretton Wood Institutions.

Just recently, the same Mr Biti, wrote a letter to the World Bank pleading for the international lender not to extent any financial aid to Zimbabwe, at a time when the country, just like the rest of the world was grappling with the devastating effects of the Covid-19 pandemic.

Therefore, the hands of the country's opposition drips with the innocent blood of Zimbabweans who are failing to get requisite facilities because of the continued isolation they have sought and continue to campaign with no shame for their continuation.

And if their hands drip with blood, isn't it about time that Zimbabweans take stiffer measures to checkmate them, after all the country isn't reinventing the wheel, but is just protecting its citizens from further abuse.

Where in the world does the opposition seek to hem the country's borders, what is worse at a time when the Government is painstakingly measures to revive the economy after months of stagnation that was caused by the Covid-19 pandemic.

Such acts of sabotage, whether they have been committed within or outside the country's borders should be severely punished with deterrent laws to ensure that Zimbabweans move in one direction.

There is an apparent lack of shame and decorum on the part of the opposition and indeed it is the responsibility of the Government to instil this into their power hungry souls.

According to Justice, Legal and Parliamentary Affairs permanent secretary Mrs Virginia Mabhiza, said the Bill is "premised on the constitutional provision on the foreign policy of our country, which values the promotion and protection of the national interests of Zimbabwe. It is the duty of the State to engage other sovereign nations on issues pertaining to foreign relations, and not self-serving citizens".

The Bill will also outlaw "private correspondence with foreign governments or any officer or agent thereof will be prohibited, including false statements influencing foreign governments, or any other such conduct aimed at undermining the country" as has been the regular conduct of the opposition party leaders.

The country's lawmakers should debate such a Bill with gusto and ensure its expeditious passage into law, it would have been a crowning moment if such a law would come into effect by October 25, the day that SADC set aside as a day to denounce the MDC-A begged for illegal economic sanctions.

Time has indeed for the opposition to reform or perish as no country in the world will allow such errant behaviour. 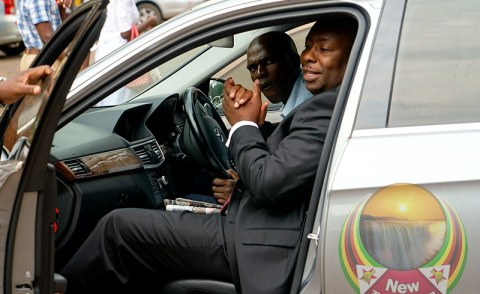 Zimbabwe Asks South Africa to Extradite Graft-Accused Mugabe Ally
Tagged:
Copyright © 2020 The Herald. All rights reserved. Distributed by AllAfrica Global Media (allAfrica.com). To contact the copyright holder directly for corrections — or for permission to republish or make other authorized use of this material, click here.

Meet the (Contested) New King of the Zulus
Arms and Armies