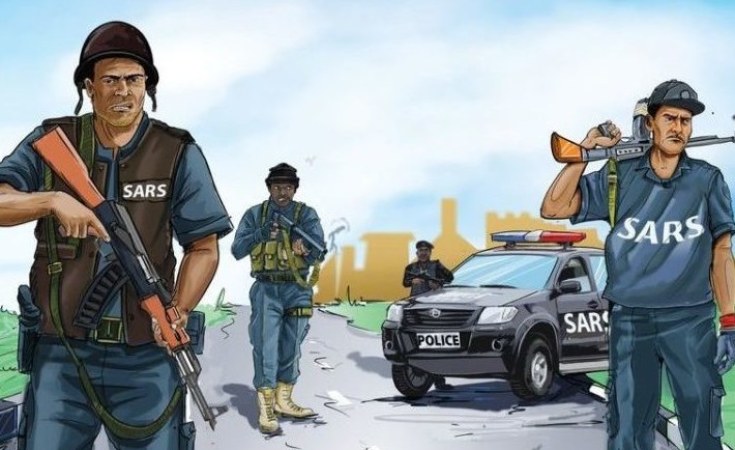 The Inspector General of Police, Mohammed Adamu, yesterday warned Commissioner in charge of Federal Special Anti-Robbery Squad, FSARS, state police commissioners and Zonal Inspectors-General of Police that they will be held liable for misconduct of SARS operatives in their areas of responsibility.

This came as operatives of the Special Anti-Robbery Squad, SARS, narrowly escaped death on Saturday, following a mob action by some angry youths who doused him with fuel and attempted to set him ablaze.

The Inspector-General of Police, IGP Mohammed Adamu, has banned the personnel of the Federal Special Anti-Robbery Squad, FSARS, and other tactical squads of the force, including the Special Tactical Squad, STS, Intelligence Response Team, IRT, Anti-Cultism Squad and other tactical squads operating at the federal, zonal and command levels from carrying out routine patrols.

Federal SARS and the special squads are also banned from carrying out routine patrol and other conventional low-risk duties, including stop and search duties, checkpoints, mounting of roadblocks, traffic checks, etc with immediate effect.

A statement by DCP Frank Mba yesterday said: "In addition, no personnel of the force is authorized to embark on patrols or tactical assignments in mufti. They must always appear in their police uniforms or approved tactical gear.

"The IGP's directives come against the backdrop of findings by the leadership of the force that a few personnel of the tactical squads hide under these guise to perpetrate all forms of illegality, contrary to the Standard Operating Procedure, SOP, code of conduct and rules of engagement establishing the squads.

"Specifically, the IGP has warned the tactical squads against the invasion of the privacy of citizens, particularly through indiscriminate and unauthorized search of mobile phones, laptops and other smart devices.

"They are to concentrate and respond only to cases of armed robbery, kidnapping and other violent crimes when the need arises.

"The IGP notes that the FSARS and other police tactical squads remain a critical component of the force in confronting prevailing and emerging violent crimes in the country.

"He, however, condemns every act of unprofessionalism, abuse of human rights and high-handedness by some personnel of the squads. He has, therefore, ordered the X-Squad and the monitoring unit to embark on immediate and massive nationwide monitoring of activities of tactical squads and other police officers on the road.

"They are to ensure prompt arrest, investigation and prosecution of all erring police officers who violate these directives and other extant regulations of the force.

"He, therefore, charged them to ensure effective supervision and mentoring of the personnel of the tactical squads under their jurisdiction.

"Meanwhile, two operatives of FSARS and their civilian accomplice operating in Lagos State, namely Inspector Sale James, Inspector Monday Uchiola and Okechukwu Ogbonna, have been arrested by Lagos State police command for acts of professional misconduct, including extortion and intimidation of innocent citizens.

"The operational vehicle of the men has also been impounded, while disciplinary procedure has already commenced against the defaulters.

"The IGP reaffirms his commitment to bequeathing to Nigerians a reformed police force that is accountable, responsible and ever ready to defend and uphold the rights of the citizens while discharging its duties of keeping the people safe and secure.

"He enjoins the citizens not to allow the misconduct by a few personnel of the force to negatively impact on their belief, confidence and trust in the police."

The SARS operative of the Special Anti-Robbery Squad, SARS, in Ughelli and environs of Delta State, narrowly escaped death on Saturday night, following a mob action by some angry youths who doused him in fuel and attempted to set him ablaze.

The reported killing of a resident of Ughelli sparked off another campaign on social media, with calls for SARS to be banned.

The incident, according to eyewitnesses, is a reaction to the rumoured death of the driver of a white Lexus jeep with registration number ABC 484 DK, identified as Joshua Ambrose, who police sources said tried to commit suicide while attempting to flee from a moving vehicle after he was arrested by some operatives of Operation Safe Delta, OSD, on Saturday in front of a popular hotel along the East-West road axis of Ughelli.

The Minister of State for Labour and Employment, Festus Keyamo, however, yesterday, debunked viral reports on the killing of the 22-year-old by operatives of the Special Anti-Robbery Squad, SARS, at Ughelli, saying the victim was not dead but alive, and was receiving treatment in the hospital.

This development came on a weekend the Inspector-General of Police, IGP Mohammed Adamu, also banned the personnel of the Federal Special Anti-Robbery Squad, FSARS, and other tactical squads of the police force, including the Special Tactical Squad, STS, Intelligence Response Team, IRT, Anti-Cultism Squad and other Tactical Squads operating at the federal, zonal and command levels from carrying out routine patrols.

Findings by Vanguard revealed that Joshua, who is currently receiving medical attention at an undisclosed hospital, was arrested in company of another occupant in the vehicle, identified as Ovie Edafe and were being taken to the police station when Joshua jumped out of the moving vehicle and slammed his head on the pavement.

The incident was said to have caused an outcry and tension in Ughelli which snowballed later in the evening resulting in the attack of the off duty SARS operative who was beaten by some angry youths at Ughelli Central garage axis in retaliation of the earlier incident.

An eyewitness, who spoke on condition of anonymity, said the mob had doused the operative with fuel in an attempt to set him ablaze but for the intervention of some good Samaritans who rescued him from the mob.

Though efforts to speak with the state Police Public Relations Officer, Onome Onowakpoyeya, were fruitless, a security source from Ughelli Police Area Command, said the state Commissioner of Police. Mr. Hafiz Inuwa, who was visibly angry at the unprofessional conduct of operatives of some of the special units in the state, had read the riot act to heads of the respective police units in the state.

The source said: "The CP in the statement which was sent to all DPOs and unit heads in the state, warned that he had been inundated with series of allegations, ranging from phone checking, extortion and assaults against law abiding citizens orchestrated by personnel from SARS, Safe-Delta and SACU and the officers in charge have been warned to reverse the trend or face severe sanctions.

"DPOs in the state have also been warned not to use their station cells for such acts by the patrol teams else they will equally have themselves to blame."

Clarifying the situation yesterday, the Minister of State for Labour and Employment, Festus Keyamo, debunked viral reports on Joshua Ambrose by operatives of the Special Anti-Robbery Squad, SARS.

Reacting to the incident on his Twitter handle @fkeyamo, the minister who is from the state, said: "I just spoke with both the Commissioner of Police, Delta State and the Area Commander in Ughelli where the unfortunate incident involving a young man and the police which took place yesterday (Saturday).

"I also spoke with Ochuko, the victim's brother. They all said the victim is alive and receiving treatment.

"Whilst I totally condemn the extra-judicial killings by SARS and other police outfits against defenceless citizens and call for comprehensive reforms and overhaul of the system, some facts of this case are as follows; The outfit involved in this case is called Operation Delta Safe and not SARS.

"The victim was not shot as confirmed by his brother, but fell out of the Police vehicle when being taken to the station after an arrest. The brother said he was pushed; the police said he jumped.

"This is a picture of the victim in the hospital this morning, showing injuries from the fall. The police stopped to pick him up after the fall, but a mob had already gathered and the police fled and left the victim.

"A Good Samaritan picked and took him to hospital. Finally, I wish to appeal to the youths in Ughelli not to resort to violence and/or destruction of lives and properties. I am on top of this matter and though the victim is alive, I will be urging the authorities to still investigate the conduct of the police in this matter."

Recall that the police authorities early last year,modified the standard of operation, SOP, of SARS to curtail their excesses. For instance, the unit initially controlled centrally from Force headquarters in Abuja but the present IGP, Adamu Mohammed, gave state police commissioners of police supervisory rights over their actions in their respective states.

This was done to allow for closer supervision, against central supervision by officers in charge of anti-robbery units alone.

Also, they were given branded black uniforms with number tags to make it easier for individuals to identify them and report any infringement, identify the unit of any erring operative.

Omo-Agege, who called on security personnel to always maintain the rules of engagement, pleaded with youth in Ughelli, his constituency, to exercise utmost restraint while investigation is ongoing.

In a statement yesterday by his Special Adviser, Media and Publicity, Yomi Odunuga, the Deputy President of the Senate expressed concern over the incessant cases of extrajudicial killings, harassment, illegal arrest and extortion of defenceless citizens by some officials attached to SARS in different parts of Nigeria.

Omo-Agege, who called on the police authorities to fish out the culprits for prosecution, stressing that this will serve as deterrent to others, said: "Those who are authorised to bear arms and maintain law and order in the country ought to understand that such must be exercised with responsibility especially when human life is sancrosant."

"I hope those who are quick at pulling the trigger would adopt strategies that would foster mutual understanding between them and those they are tasked to protect, in their bid to save the lives of Nigerians. It would be a depressing twist of fate for them to be listed among those contributing to the list of the dead in this challenging period globally."

Nigerian Police Disbands Hated Unit Amid #EndSARS Protests
Tagged:
Copyright © 2020 Vanguard. All rights reserved. Distributed by AllAfrica Global Media (allAfrica.com). To contact the copyright holder directly for corrections — or for permission to republish or make other authorized use of this material, click here.