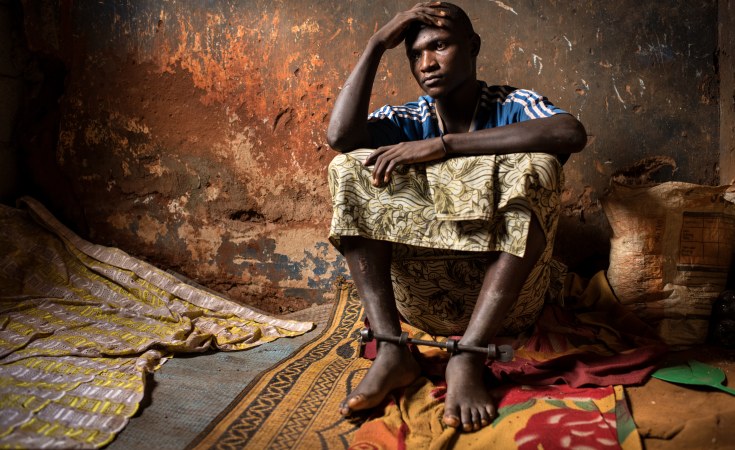 Robin Hammond/HRW
A shoemaker in Ibadan who was taken by his mother to a clinic, where prayer and herbal medicine are used to treat him.
allAfrica.com

Cape Town — Many people with mental health conditions in African nations are living shackled in chains or locked up in confined spaces, says Human Rights Watch.

In a report issued on Tuesday, the rights group says a study carried out by its researchers over a nine-year period shows that Burkina Faso, Ghana, Kenya, Liberia, Mozambique, Nigeria, Sierra Leone, Somaliland and South Sudan are among about 60 countries around the world in which those regarded as mentally ill are ill-treated as a result of being stigmatised or a lack of mental health services.

"Many are forced to eat, sleep, urinate, and defecate in the same tiny area," says the report. "In state-run or private institutions, as well as traditional or religious healing centres, they are often forced to fast, take medications or herbal concoctions, and face physical and sexual violence."

Shackling people is "an open secret" in many places, according to Kriti Sharma, the author of the report. "People can spend years chained to a tree, locked in a cage or sheep shed because families struggle to cope and governments fail to provide adequate mental health services."

Ahead of World Mental Health Day on October 10, Human Rights Watch (HRW) is launching an international compaign, with the hashtag #BreakTheChains, to end the practice. Its report estimates that 792 million people globally suffer mental health conditions, but says the world's governments spend less than two percent of their health budgets on mental health.

"In the absence of proper mental health support and lack of awareness," the report says, "many families feel they have no option but to shackle their relatives. They are often worried that the person might run away or hurt themselves or others.

"Shackling is typically practiced by families who believe that mental health conditions are the result of evil spirits or having sinned… Some people are even shackled to another person, forcing them to go to the toilet and sleep together.

Robin Hammond/HRW
At least half of those at a herbal centre in Ghana, run by a healer who learned her trade from her mother, are shackled.

"In many countries, families take relatives – including children as young as 10 – to traditional or faith healing centres where they are shackled for restraint or punishment… They are… routinely forced to take medication or subjected to alternative 'treatments' such as concoctions of 'magical' herbs, fasting, vigorous massages by traditional healers, Quranic recitation in the person's ear, Gospel hymns, and special baths."

The report adds that in countries such as Nigeria, HRW researchers found that "men, women, and children were chained next to each other, leaving them no option to escape if they encountered abuse from staff or other chained individuals." Also, boys as young as 10 were chained together in rooms with adult men.

The report quotes Archbishop Danokech of the Holy Ghost Coptic Church of Africa in Kisumu, western Kenya, as saying of more than 60 men, women, and children in detention: "We do not want them to wear clothes. We keep them in their underclothes. We remove their clothes so they won't run away or escape."

In some places, such as Somaliland and Nigeria, psychiatric patients in hospitals are chained. In South Sudan, HRW found in 2016 that people were chained and held in prison "not because they had committed a crime but simply because they had a disability… In Juba and Malakal prisons, people with psychosocial disabilities were chained to the floor day and night or tied outside to tree naked, and soiled with their own excrement…

"Human Rights Watch research in Nigeria found that people with mental health conditions were held in iron shackles around their ankles in locked-up wards in a psychiatric hospital and in government-run rehabilitation centres."

Kriti Sharma/HRW
Families bring “bewitched” relatives for healing to a church in western Kenya, where more than 60 men, women and children with psychosocial disabilities are detained.

The report says only a handful of countries have measures aimed at ending the shackling of the mentally ill. But it points to promising improvements.

In Ghana, Dr. Akwasi Osei, CEO of the Mental Health Authority, announced in 2017 that the government would enforce a law preventing people from being subjected to inhuman treatment, including shackling.

In 2006, Somalia was included in a World Health Organisation "Chain-Free Initiative", resulting in 1,700 people being freed from chains between 2007 and 2010. "Overt commitment by political leaders and building capacity of existing health workers were critical to the success of the chain-free initiative in Somalia," the report says.

"In Sierra Leone, while chaining continues to be practiced in faith healing centres, it is now prohibited at the Sierra Leone Psychiatric Teaching Hospital, the country's only mental health facility, located in Freetown."

It is possible, the report adds, for people with mental health conditions to thrive in their communities if they receive the right kind of support.

"In Tanzania, Malaki, a boy with an intellectual disability was chained to a pole by his family to ensure he remained safe in his home in Nyarugusu refugee camp in Kigoma province in 2017. When the Special Olympics team had Malaki released, he got the opportunity and training to play football. Malaki's story helped shape his community to be more inclusive and accepting. Malaki went from playing football in the Nyarugusu camp in Tanzania to the 2019 Special Olympics World Games in Abu Dhabi."

Read the accounts of individuals in Ghana, Kenya, Liberia, Nigeria and Mozambique

'Mental Health Can Affect Everyone'