Africa: With Armed Groups On the Rise, Youth Engagement Is More Important Than Ever 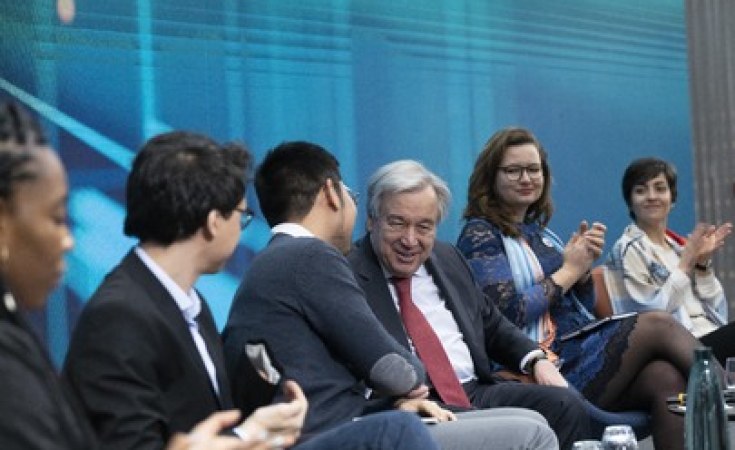 Jean-Marc Ferré/UN Photo
United Nations Secretary-General António Guterres, centre, meets with young people at the Graduate Institute of Geneva, as part of the global conversation on the occasion of the seventy-fifth anniversary of the United Nations.
Inter Press Service
opinion By Siobhan O'Neil and Kato Van Broeckhoven

New York — As governments worldwide struggle to contain COVID-19, recent reports suggesting armed groups like Islamic State are resurging offer a sobering account of the many challenges that the global community now faces.

Indeed, the UN Secretary-General has warned that we must not let armed groups exploit fragilities caused by the pandemic, as "like the virus, terrorism does not respect national borders."

The COVID-19 pandemic - and resulting economic fallout - has created fresh opportunities for gangs, criminal syndicates, and armed groups to instrumentalize the pandemic and grow their ranks.

From calls to weaponize the virus against police officers, efforts to exacerbate the chaos being caused by the pandemic to conduct deadly attacks, to highlighting their superior public health response, violent groups are taking advantage of the pandemic to consolidate their power.

To date, the policy conversation has been largely about the response of armed groups to COVID-19. It may be even more important, however, to consider whether a poor government response will create greater support for armed groups, especially among youth.

With COVID-19-related closings of schools, businesses and borders, youth may have even fewer opportunities for advancement in societies where there were few to begin with. that could lead to increases in associations with armed groups.

Our research suggests that economic drivers or a lack of social mobility will not be the only meaningful drivers of armed group association. Equally important are the pro-social appeals that allow armed groups to transcend being "the only option" to being perceived to offer young people a positive way forward.

IS's communication strategy, for example, has largely been characterized by "soft power" appeals towards young people based on positive incentives.

These pro-social appeals can be extremely powerful, particularly with young audiences. For example, they suggest that young people can contribute to something bigger than themselves. As the pandemic makes it difficult to connect with peers, armed groups' promises of a ready-made community and a "significant life" are likely to be all the more compelling.

Armed groups have proved adept at exploiting generational tensions even before the pandemic broke out: IS cast itself as a "generational revolt" against earlier waves of political Islam and even self-avowed jihadist predecessors. Groups like IS offer a chance for youth to bypass generational hierarchies.

In countries where establishing yourself financially allows you to marry, and thus enter adulthood in the eyes of your community, some armed groups - like Boko Haram - have facilitated marriages that would otherwise be financially impossible for young men in their ranks.

The promise of social mobility may elevate the appeal of certain armed groups once the economic impact of COVID-19 is felt.

The COVID-19 pandemic has laid bare - and exacerbated - the generational divide, but the attention on youth proceeds the current crisis. Much of the discussion around "violent extremism" and "radicalization" in the last fifteen years has focused on youth. As digital natives, there have been concerns about the vulnerability of youth to online recruitment by violent organizations.

This concern, combined with their developmental needs and inclination for risk-taking has led to "a predominantly negative narrative on youth". This pessimistic view had so permeated conventional wisdom about conflict that the UN Security Council took the unusual step of crafting a resolution aimed at shifting the narrative about youth to recognize their potential to positively contribute to peacebuilding.

But more needs to be done than changing the narrative alone. The international community has taken to reiterating that youth are able to play these roles, but rarely makes space for them do so in its efforts to prevent and respond to conflict.

As calls grow for a new social contract to address inequality, young people must be given a voice in designing and implementing peace processes, conflict prevention efforts and reintegration programming.

Youth are often treated as passive beneficiaries rather than partners in the road to recovery and peace. As governments - national to local - continue to rollout plans to address the pandemic, youth need to be represented in those policy discussions.

We need to ensure that young people are provided a place in society at large as we emerge from this crisis and beyond. Some armed groups appear to be making room - will we?

Kato Van Broeckhoven** is a Project Manager at United Nations University Centre for Policy Research on the Managing Exits from Armed Conflict project and previously co-edited Cradled by Conflict with Dr O'Neil.

*Prior to joining UNU, Dr O'Neil was a consultant at the UN Mine Action Service (UNAMS) in Mali and Palestine and worked in US homeland security agencies. Dr O'Neil received obtained her doctorate from the University of California, Los Angeles. Her full bio can be found here: https://cpr.unu.edu/author/soneil

**Prior to joining UNU, Ms Van Broeckhoven worked on city-level programming aimed at preventing violent extremism in Belgium. She also worked as a consultant for the United Nations Institute for Training and Research, the World Bank's Global Knowledge Partnership on Migration and Development, and Columbia University's Global Policy Initiative. Her full bio can be found here: https://cpr.unu.edu/author/kbroeckhoven.