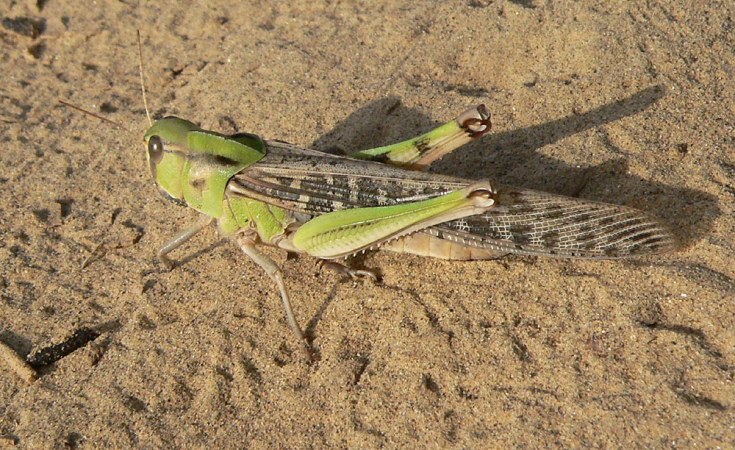 Africa is currently experiencing two locust outbreaks both due to unusual climatic conditions. These two outbreaks are unrelated but are due to the unusually high rainfall and flooding in the areas where low densities of the locusts occur.

The desert locust (Schistocerca gregaria) is producing a plague type outbreak in North and East Africa. This outbreak started in June 2019 and the threat is still there.

Locusts are grasshoppers that have the potential to form a swarm of thousands to hundreds of thousands of individuals. They undergo phase polymorphism, which means that they can change from a solitary form into a gregarious form - meaning they congregate in large numbers. These have a different colour and different behaviour.

The solitary form is scattered and blends into the environment. The gregarious form arises from an increase in population density which causes the locusts to aggregate. Locusts need to multiply, concentrate and aggregate for swarms to form.

The African migratory locust is a tropical locust which prefers grasslands in humid areas. In southern Africa they are found in the Okavango Delta, Chobe wetlands and Zambezi plains.

In these areas the locust exists in the solitary form, which is green or brown in colour, widely spaced, and produces three or four generations a year. Gregarisation of these locusts to form swarms is linked to rainfall and in some cases irrigation of cereal crops. The current swarm is probably due to the heavy rains received in the area in January.

Flooding and high rainfall allow the locust to expand the area in which it can lay eggs. Adult females lay eggs in moist soil in fairly open areas. For the embryo to develop it must absorb water early in development. Sufficient water at the time of egg laying will allow the embryos to develop and survive without drying out. In this state the embryo can survive in the eggs during the dry and cooler winter months until a rise in temperature triggers hatching.

Temperature is important for the timing of hatching. As the floods recede during the dry winter season, locusts can keep laying eggs due to the moisture in the soil. Thus the availability of suitable egg laying sites increases as well as the length of time during which the locusts successfully lay. This contributes to increasing the population density in the area.

During the winter months there is an accumulation of egg pods in the soil. As there is sufficient water, the embryos in the eggs laid by females at the beginning of winter have developed and are ready for hatching. At the onset of summer, when temperatures increase, there is synchronised hatching of eggs.

The emerging hoppers come into contact with each other in sufficient numbers to cause gregarisation. These hoppers then form bands which start marching in search of green food. The gregarious hoppers have a distinct brown and black colour pattern. They will develop into gregarious adults which are yellow-orange in colour with distinct black markings. These develop into flying swarms which are swept along by the prevailing winds into agricultural areas. These locusts have the potential to cause damage to cereal crops.

How can farmers protect their crops?

The best way to cope with locust swarms is to try to prevent them from increasing in size. Surveillance is important. This is where people are employed to monitor known outbreak areas so that early control measures such as targeted chemical control can be employed to keep the population below the threshold to trigger gregarisation. The threshold has previously been estimated to be about 2,000 adults per hectare. Unfortunately many of the areas where the locusts lay eggs are remote and inaccessible.

Although these locusts are consumed by many predators such as birds, reptiles and mammals, they don't make an impact on the swarms.

The most effective means of controlling locusts is to prevent the swarms from forming. The only successful control measure has been chemical control, which is expensive and environmentally unfriendly. There's research into using the hormones that cause the locusts to aggregate as a chemical attractant to get the locusts to congregate in a place where they can be killed. This research is in the early stages. 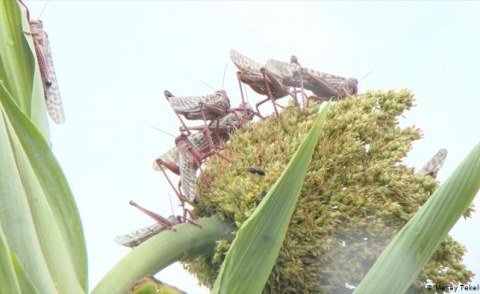 Millions Facing Severe Food Shortages in Rural Zimbabwe
Tagged:
Copyright © 2020 The Conversation Africa. All rights reserved. Distributed by AllAfrica Global Media (allAfrica.com). To contact the copyright holder directly for corrections — or for permission to republish or make other authorized use of this material, click here.