Angola: President Defends Reactivation of Mechanisms Against Destabilization in DRC

Luanda — The Angolan Head of State, João Lourenço, Wednesday called for the need to reactivate the effective functioning of regional mechanisms to combat the negative forces that are destabilising the east of the Democratic Republic of Congo (DRC).

Speaking by videoconference at the Quadripartite Summit attended by his counterparts from the DRC, Rwanda and Uganda, President Lourenço pointed out that among the mechanisms was the International Conference of the Great Lakes Region (ICGLR), which must effectively fulfil the role which is incumbent on it and which was the basis for its creation.

At the meeting, whose aim was to discuss security issues relating to the DRC, the Angolan statesman reiterated that cooperation in the field of defence and security would only be effective if it was coordinated by a mechanism in which all member states could agree and therefore had the legitimacy to do so.

According to João Lourenço, the illegal exploitation of mineral resources in the countries of the region should be seen as a way of financing the negative forces operating in the DRC and possibly also the fundamentalist terrorist groups operating elsewhere on the continent, such as in the SAHEL region, Mozambique or others.

He underlined that Angola has, over the years, been one of the victims of the plundering of mineral resources, in particular diamonds, by African citizens of different origins, who commit the crime of organised illegal immigration, as well as the illegal exploitation of the host country's strategic natural resources.

"This is a matter that should be taken seriously by all of us, and we believe that we will overcome it if each of our countries does its part," he said.

He added that "the necessary measures must be taken in the universal fight against organised illegal immigration and the need to cut off sources of funding for terrorism".

In his speech, President João Lourenço noted that Angola was today facing two major challenges, that of fighting Covid-19 and its consequences, in terms of public health and the need to keep the economy producing goods and services for domestic consumption, and that of exporting and maintaining jobs. 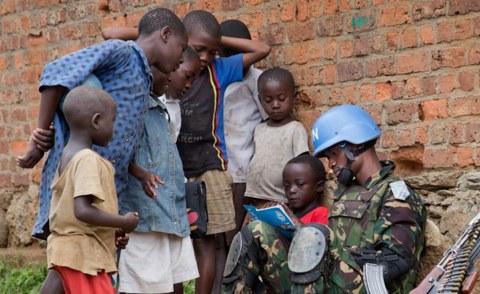 Life Sentence for DR Congo Militia Leader
Tagged:
Copyright © 2020 Angola Press Agency. All rights reserved. Distributed by AllAfrica Global Media (allAfrica.com). To contact the copyright holder directly for corrections — or for permission to republish or make other authorized use of this material, click here.