Angola: An Unconventional Look At Life in Lobito - Beyond Angolan Stereotypes 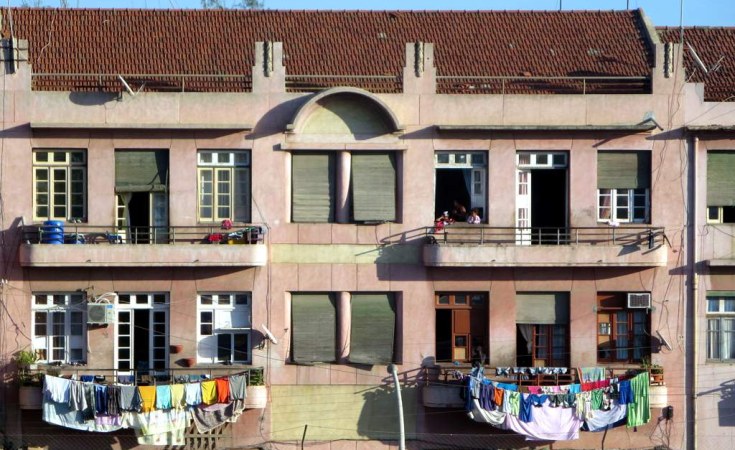 David Stanley/Flickr
A building opposite the harbour in Lobito, Angola.
The Conversation Africa (Johannesburg)
analysis By Carina Venter

Angola has changed tremendously since the end of its civil war in 2002. The war lasted almost four decades and decimated a country that had received little development support under Portuguese colonisation. In her new book, "From Water to Wine: Becoming Middle Class in Angola", anthropologist Jess Auerbach focuses on everyday success rather than systematic failure. She makes a deliberate choice to give attention to beauty and happiness in a country that rarely appears in English-language media, and when it does, is usually with reference to corruption. Carina Venter from Stellenbosch University interviews the author and puts the book in dialogue with current events.

Why did you choose to focus on the middle class in Angola? How is the group defined and why does it matter?

In the mid 2010s, there was a huge global interest in the African middle classes because of their assumed link to democratic stability and emerging markets. I was a PhD student in the US at the time, and noticed that everything I read about Angola in English was negative. I wanted to add some nuance to that portrayal, and the "middle class" was a way in. For the book, the definition I used was those people who had three things: their own house, their own car, and higher education. Those three things allow people to make their own choices in most domains of their lives.

What led you to Angola?

I was struck by how people in the US still saw Africans, as a general category, as "exotic", even in 2014. I was looking for ways to undo that, and to translate some of the basic human things that are similar everywhere. I spent 18 months in Angola and another six months in Brazil interviewing Angolan students.

In Lobito, which is in Angola's Benguela province, I observed people getting on with their lives, working towards better futures for their kids, celebrating the small things and the big things. But I also had an awareness that life in Angola was tough. You have to do a lot of extra work just to maintain a basic level of comfort because the infrastructure and systems that exist elsewhere don't exist there.

Early on in the book you introduce the idea of "trafficking in influence" as an alternative to the word "corruption".

In so many ways, Angola spotlights systems that affect most of the world to some degree. It's not always what you know, but who you know that determines success in most cases. The "traffic of influence" is simply that - networking on steroids. In Angola "trafficking influence" is necessary because the state controls most resources, is very centralised, and is also overstretched. It helps to know people within the system who can get things done.

Trafficking influence isn't necessarily about corruption, it's more about speeding up processes, and efficiency, and I think that applies everywhere: much of global diplomacy and business is really about the phone call or the corridor encounter that happens before the international meeting.

Theft of public resources is inexcusable, but in Angola - as elsewhere - unless it's resolved at the top it's hard to enforce anything lower down. It's worth remembering that Angola was decimated by slavery, and then an extractive colonial regime. The sins of those processes have never been accounted for. Angola remains enmeshed in global systems where the rules are written by outsiders.

What are your thoughts on the layers of ideologies (Cold War, postcolonial, capitalist, democracy) at work in Angola?

Angola was the site of a major Cold War proxy conflict. One group of the current elite were trained in the former Soviet Union and Cuba, and the other in Western liberal democracies of various flavours. It's one of the few places in the world where those ideologies still live shoulder-to-shoulder, with really interesting results in terms of day-to-day behaviour, loyalty and understandings of what the state should be, and what it should accomplish.

Reading "From Water to Wine" I sense an exasperation with the mystified world of difficult academic writing. Not only do you want more people to understand contemporary Angola with your writing, you also want them to care. Can you talk about this intersection of writing, access and care?

Behind a lot of academic writing is a desire to appeal to a niche circle of thinkers who are basically the gatekeepers to promotion within our fields. It makes a lot of the research in the humanities and social sciences inaccessible to the public and colleagues in other disciplines. If a South African engineer is contracted to build a bridge in Angola, for example, I'd like her to be able to pick up my book and read it to understand how the country functions, because if she does so, project management will be easier. But for that to happen one has to avoid unnecessary jargon and disciplinary winks and nods.

Besides ethnographic analysis of contemporary lives in Lobito, this book also contains poems, graphics, and images. Why is that?

The poems came directly from my fieldwork. There were so many experiences I wasn't able to capture in conventional modes of writing. I wanted to play with form and expand beyond academic conventions.

What has shifted in Angola since you researched and wrote the book, and what is in store for the country?

Yes, both Angola and the world have shifted significantly. In 2014, oil prices plummeted, which had a huge impact on the national treasury. With COVID-19, the global shift of attention away from illnesses like malaria is likely to have real reverberations, and the economy is under major strain. Many Angolans who were managing to move themselves and their families into more secure positions have found themselves much more precarious. Climate change is a growing threat.

There have been some positive, albeit slow, political changes in Angola in recent years and, like elsewhere in Africa, COVID-19 numbers have been lower than expected. A lot depends on how, and to what end, the world "opens" in the next few months. I'm hopeful my book contributes in some way towards ensuring Angolans are let into the room when that happens.