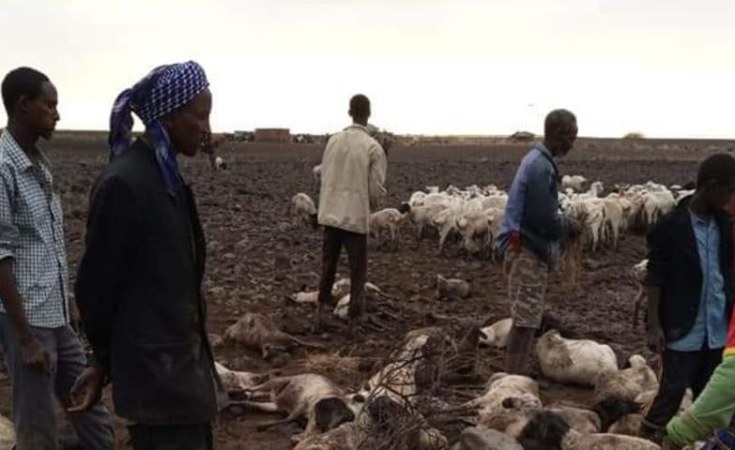 At least one person has died and more than 400 families left homeless in North Horr Sub-county following flash floods that hit the area Saturday evening.

The floods were caused by heavy downpours accompanied by storms that lasted more than 30 minutes.

An elderly man reportedly drowned while trying to cross the swollen El-beso river in Turbi Ward.

Maikona Location Chief Guyo Isacko told the Nation on phone that more than 400 families are in dire need of food, blankets and mosquito nets after the floods destroyed their manyattas.

"We appeal to the government and all well-wishers to come to the aid of the over 400 households that have been rendered homeless,"Mr Isacko said, adding that two children aged between 5 and 7 were injured.

One broke a right leg while the other sustained head injuries after they were swept by the heaving waters downstream, though they were rescued.

They were taken to Kalacha Level Four Hospital where they are currently hospitalised and have been reported to be in stable conditions.

Mr Isacko said most of the affected were women and children in Ledhamis, Manyatta Diba and Manyatta Burji in Maikona Location. He said the families have now pitched camps at Ledhamis ECDE centre and a local dispensary.

He added that more than 1,000 goats and sheep were killed. Mr Isacko appealed to the residents living in flat areas to move to higher ground.

Turbi MCA Guyo Diba urgedo the government and well-wishers to come to the aid of the victims.

Red Cross Regional Coordinator Maurice Anyango said his team has already been dispatched to evaluate the extent of destruction in the affected areas.

He said that detailed reports will be made public after the assessment is complete.