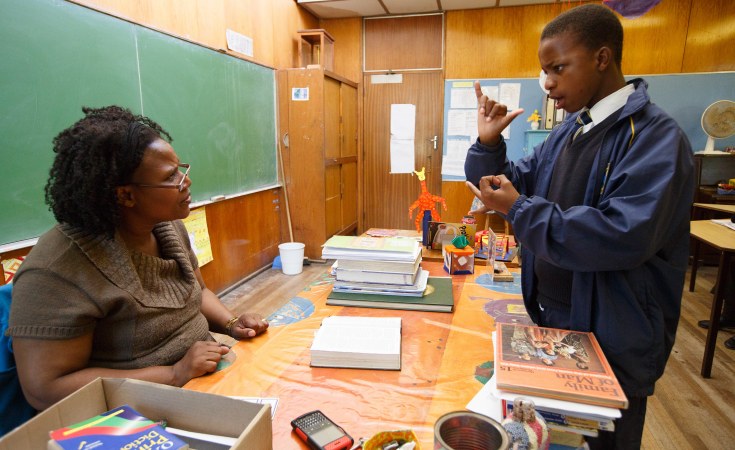 If South African Sign Language is recognised as one of the country's official languages, it will considerably ease many of the deaf community's problems of access, education and equality.

"The recognition of SASL will accelerate and deepen full inclusion of SASL as a linguistic and cultural right of deaf people through which they can participate on an equal basis with others," said Jabulani Blose, chief executive of Sanda - an organisation that champions the rights of deaf people in the country.

"Full SASL recognition will ensure deaf children gain early exposure and fluency to the language early in life, develop their inherent capability and entrench their rights to develop their fullest potential.

"For the deaf community as a whole, it will facilitate social inclusion of deaf people to gain opportunities and resources, have greater participation in decision-making that affects their lives and will help them access fundamental rights necessary to participate in economic, social and cultural life that is considered normal in South African society," added Blose.

The Parliamentary Constitutional Review Committee, responsible for investigating possible amendments to Section 25 of the Constitution, is considering adding SASL to the 11 officially recognised languages in South Africa.

Even though the committee is considering this, the process has been delayed, much to Sanda's disappointment.

"The officialisation of SASL has undergone different pathways from the Constitutional Review Committee that recommended that the Constitution of the Republic of South Africa be amended to include SASL as an official language," said Blose.

"This was presented to the national council of provinces and was then referred to the national assembly for final consideration. This, however, was overshadowed by the land consultation process which slowed down the issue of SASL and placed it firmly on the backburner."

Sanda made their submission to the Constitutional Review Committee on 27 May 2016.

Why this is important

As an official language, SASL would have a special legal status and the opportunity to be used officially in the whole of government - the courts, parliament and all administrative branches.

What's more, Blose says, the major outcome will be the mandatory inclusion of SASL in language planning, policy development, budgeting and overall plans and programmes of government. For this reason, then, "this, in and of itself, will be liberating and empowering for the deaf community and will count as the 'second phase of deaf people's freedom' in South Africa.

Moreover, sign language's official status will ensure that deaf people's linguistic human rights will be upheld in line with the Bill of Rights. Also, such a move will professionalise and promote SASL so it is available on request or on demand to assist the deaf community access services, information, public institutions and education with relative ease.

Communications director at the Department of Women, Youth and Persons with Disabilities (DWYPD) Shalen Gajadhar agrees with Blose.

"Persons with communications challenges, hard of hearing and deaf South Africans encounter barriers to participation daily due to the rest of South Africa not familiarising themselves and incorporating sign language into everyday communication," said Gajadhar.

According to the DWYPD, South Africa has a well-established deaf community with more than four million deaf and hard-of-hearing people. This alone means the department supports making SASL an official language so as "to advance communication access and social justice for all deaf community members as well as to give guidance to right and fair use of sign language interpreting across all sectors of society".

During September, Deaf Awareness Month, Sanda worked to raise awareness about deafness, highlighting the community's human rights in the process. Additionally, the advocacy group used the month to "highlight issues that warrant national attention through unique campaigns to engage with deaf members themselves, and the public generally to encourage them to celebrate deaf identity and South African Sign Language."

The SASL Charter was launched by the Pan South African Sign Language Board (PANSALB) in early September. "The SASL Charter articulates and affirms the linguistic rights of deaf persons in South Africa and is aimed at creating conditions for the development of SASL," read part of PANSALB's statement, which goes on to state:

"The charter compels all government departments and other organs of state as well as the private sector to make provisions for SASL interpreting. And it guarantees access to services by deaf persons through ensuring essential service staff such as social workers, and police officers receive advanced level training in South African Sign Language."

PANSALB chairperson David Maahlamela added: "The launch of the charter is a giant stride towards ensuring the officialisation of South African Sign Language as the 12th South African official language."

For Sanda, the SASL Charter will be used as a monitoring and evaluation tool that can help the organisation to hold the government accountable for the implementation of the charter provisions.

"The SASL Charter codifies and formalises the many undocumented concerns of deaf people in many areas of public life such as linguistic, educational, self-representation, community consultation, law enforcement, digital access and technology and interpreting, and sets the ground for constructive engagement and development of the Deaf sector," Blose said.

Notwithstanding the community's challenges, Blose is happy with the progress made to promote the rights of deaf people. This includes the launch of Video Remote Interpreting (VRI) services by Virecom (Video Remote Communications) in early March 2020, in partnership with the South African Police Service.

Virecom is a deaf-owned company. Their vision is "to lead the delivery of the highest-quality video remote interpreting service that empowers deaf people to enjoy independent connected lives."

Their VRI development is available at five selected police stations in Gauteng, including Orange Farm, Moroka in Soweto, Johannesburg Central, Tembisa and Brooklyn. The aim is to provide interpreting services remotely from its call centre at all hours of the day, Blose said.

According to Blose, Sanda strongly encourages mass adoption and use by the public service of the video remote communications technologies. This will help communication and "remove language barriers and provide equitable access to services to ensure the rights, dignity and social inclusion of sign language users are protected and recognised".

The community has made strides in other areas too.

Other notable achievements include SASL being taught as a first additional language in schools, as well as being recognised as a language of instruction for deaf pupils.