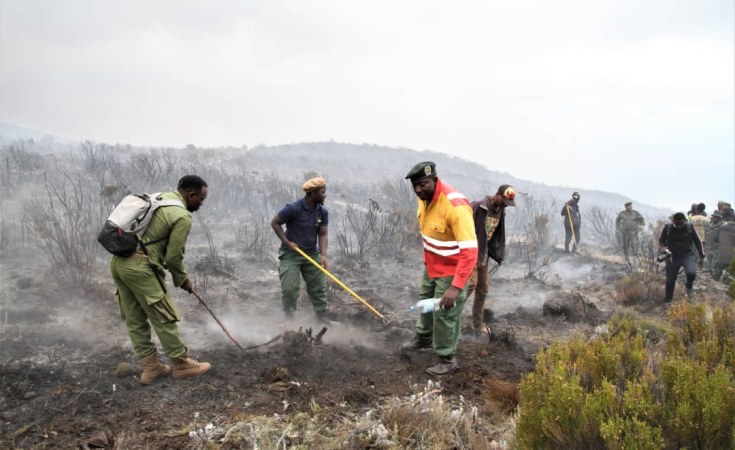 TOURISM activities, including scaling Africa's highest peak- Kilimanjaro remain unaffected as firefighters continue to fight a blaze which broke out on the mountain Sunday afternoon.

Tanzania National Parks (TANAPA) has taken necessary precautionary and preventive measures to ensure that tourists from within and outside the country as well as their properties are not affected.

TANAPA Assistant Conservation Commissioner - Communication, Mr Pascal Shelutete said that fire started at a tourists' resting centre - Whona along Mandara and Horombo routes to Mt Kilimanjaro on Sunday and the students involved in extinguishing the fire were led by those from the College of African Wildlife Management (CAWM).

"I want to assure all tourists as well as all Tanzanians that efforts to extinguish the fire are at an advanced stage; tourism activities on Mt Kilimanjaro, including climbing it, are going on and TANAPA has taken all precautionary measures to ensure that they are safe along with their properties, guides and porters," said Commissioner Shelutete.

Mount Kilimanjaro remains as one of the famous tourist attractions in the world and receives a huge number of climbers and sightseers each year. An estimated 50,000 tourists climb the mountain annually.

The tourism season was launched on June 1st, this year by the Minister for Natural Resources and Tourism, Dr Hamis Kigwangalla and already tourists are flowing in the park that hosts the world's highest free-standing mountain.

Commissioner Shulutete noted that while most weight was thrown in containing the fire, TANAPA was also investigating the source of the fire.

Unconfirmed sources have it that it was caused by unscrupulous people who were trying to extract honey in the park and fled as fire overpowered them.

Incidents of fire at Mt Kilimanjaro used to happen in the last decades but everything was put in control in recent years, so this occurrence comes as a surprise since TANAPA has been transformed from civilian to paramilitary status and has since controlled poaching and other illegal activities squarely.

The highest mountain in Africa that is snow-caped comprises two dormant volcanic cones-Kibo 5,895m above sea level and Mawenzi 5,149 and one extinct volcano (Shira 3,962m). The origin of the word is not well known but it is said to be a combination of the Swahili word Kilima meaning 'Mountain' and the Kichagga word Njaro, loosely translated as 'Whiteness' giving the name White Mountain.

Climbing to the top which is far up into the sky it's a life-time experience that no one can forget.

The other seven gates of Rongai, Machame, Londorosi, Lemosho, Kilema, Mweka and Umbwe are located around the mountain base and can be reached by road.

The park is endowed with a diverse variety of attractions ranging from terrestrial wilderness to permanent glaciers on the mountain peaks. Kibo, the highest peak (5,895m) on Mount Kilimanjaro, is covered by snow throughout the year despite being close to the equator. Conquering this peak is an adventure of a lifetime.

Mawenzi Peak is rugged and maintains the features of glaciation with its surrounding vegetations. Shira is the oldest peak that collapsed and formed a Shira plateau with outstanding scenic beauty on the mountain with several kinds of migratory large mammals such as buffaloes and elephants.