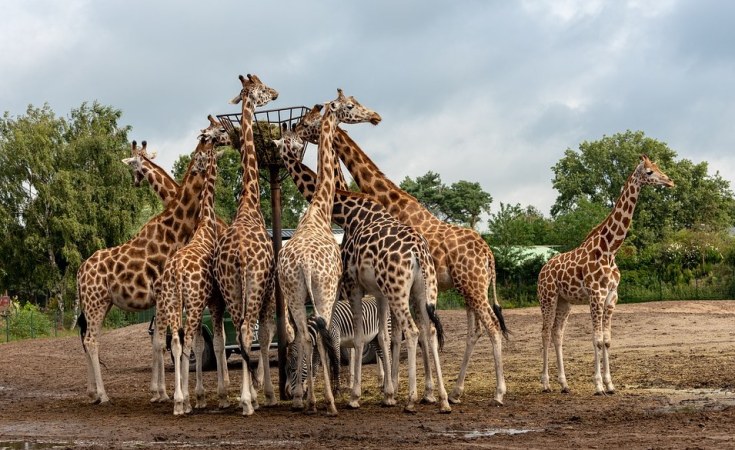 A Namibian wildlife organisation co-funded by international movie star Angelina Jolie is butting heads with the Ministry of Environment, Forestry and Tourism over allegations that it broke laws by buying, transporting, keeping and breeding animals without the required permits.

The N/a'an ku sê Foundation, which prides itself in providing a safe haven for injured, orphaned and problematic wild animals, is now suing the government, accusing it of trying to force the foundation to kill 217 animals in its care.

Documents seen by The Namibian show that the N/a'an ku sê Wildlife Sanctuary, situated some 40 kilometres east of Windhoek, has faced several criminal investigations in the past three years.

Behind N/a'an ku sê's international image is a sanctuary at odds with the authorities for years, amid complaints that it drops president Hage Geingob's name at the environment ministry for its benefit.

Ministry documents show that at least three leopards, eight cheetahs and 10 African wild dogs were not accounted for at the conservancy.

N/a'an ku sê's management has confirmed there was a criminal case, but denied any wrongdoing.

Last month, N/a'an ku sê lodged a High Court case against the environment and justice ministries to stop the authorities from killing 217 animals currently in the organisation's care.

This includes 24 endangered African wild dogs, 80 baboons, five lions, five leopards, 10 caracals, 17 meerkats, 70 tortoises and six vervet monkeys. N/a'an ku sê claims the environment ministry is making demands that it should set animals free or put them down, and that this is contrary to the obligations of the ministry.

'GOD WILL PROTECT US'

N/a'an ku sê is a San phrase meaning 'God will protect us'.

The foundation, founded in 2006 by husband and wife Rudie and Marlice van Vuuren, is well known globally due to its ties with Hollywood stars Brad Pitt and Angelina Jolie.

N/a'an ku sê's name popped up in a criminal investigation around 2017, although no direct charges against its owners were laid.

One of the cases involved the illegal capturing, transporting and selling of six elephants from the Grootfontein district destined for Europe. N/a'an ku sê appeared to have been used as a transit point for the elephants.

The case has since been provisionally withdrawn pending a decision by the prosecutor general.

In a second case, ministry officials attended to reports that farmers in the Nauchas and Rehoboth area killed a problem cheetah that was killing their livestock.

The officials allegedly discovered that the cheetah was fitted with an electronic monitoring collar, and on further investigation it appeared that Van Vuuren had erected a cheetah encampment at Solitaire (between Sossusvlei and Walvis Bay) and was allegedly illegally breeding them.

At the time, the ministry also alleged that three cheetah cubs, born in the enclosure, were moved to N/a'an ku sê by Van Vuuren.

This case too is stalled and is waiting for a decision by the prosecutor general.

N/a'an ku sê once more this year found itself on the wrong side of the law after a May 2020 inspection by the environment ministry found further alleged transgressions and non-compliance at the sanctuary.

However, the probe found that the large carnivore numbers applied for do not correlate with the number of animals observed in the holding facilities by investigators. At least three leopards, eight cheetahs and 10 African wild dogs were not accounted for.

Government regulations on the handling of large carnivores in captivity state that such animals should not be released into the wild, allowed to roam freely or be transferred between facilities without obtaining permission from the minister.

Also, according to the same regulation, the breeding of large carnivores in captivity is strictly prohibited.

The inspection uncovered that eight cheetahs were bred or born in captivity (six at Solitaire and two at N/a'an ku sê), and also found that a wild male cheetah had somehow gained access to the facilities and bred with a female cheetah in custody.

The inspection further uncovered that various small animals are also being kept in captivity without the required paperwork.

Rudie van Vuuren told The Namibian the N/a'an ku sê Foundation never violated any law pertaining to wildlife. He also blamed the ministry for outstanding paperwork from 2016 to date, saying it did not issue the paperwork after the foundation made applications, was inspected and made the required payments.

While confirming the ongoing investigations into the affairs of N/a'an ku sê, Van Vuuren said they were never granted an opportunity to give a statement or insight into the case docket.

"A criminal case was referred to the prosecutor general. No charges were levelled against us. More than enough time passed for us to conclude that no case will ever be made against us," he said.

He also denied claims that N/a'an ku sê was implicated in a case involving the illegal capture, transport and sale of six elephants found on its premises.

"I made it clear that we will not kill any animals. They followed the meeting up with correspondence indicating that the animals should be killed, and when we would do this. This is part of our claims to the court, we will not allow any animal to be killed due to what we believe is the Ministry of Environment, Forestry and Tourism's incompetence," he said.

Van Vuuren also said allegations that N/a'an ku sê received special treatment from the ministry because he is the president's doctor were untrue, adding his relationship with the president was strictly that of doctor and patient.

"Our perception has always been that since 2015 when the president took up office, the environment ministry has rather worked against us and not with us. I cannot help wondering if these remarks are merely aimed at discrediting the president," he said.

Asked about the status of the current investigations into N/a'an ku sê regarding non-compliance with laws and regulations on the handling of wildlife, the ministry's spokesperson, Romeo Muyunda, declined to divulge any details.

"This is an internal and individual matter, thus the ministry cannot divulge information on it, and this applies to all other people or institutions - cases cannot be discussed with media houses," Muyunda said.

The Namibian understands some senior officials in the environment ministry have actively attempted to thwart the probe into the wildlife sanctuary, a common tactic used when politically connected individuals are implicated.

Despite ongoing investigations, N/a'an ku sê seemingly continues to benefit from the state in the form of wildlife.

"The N/a'an ku sê guys use a rescue tactic to get state animals. The moment they hear there is a problem animal causing havoc in communities, they would write to the ministry and offer to capture and keep the problem at their facility," said an official who is privy to the matter.

The animals would often stay there for good, the source said.

The May 2020 inspection report of N/a'an ku sê's facilities by the environment ministry alleges that the foundation defrauded the ministry of N$59 200 annually for nine species of wild animals it was keeping without the appropriate permits.

"N/a'an ku sê defrauded the ministry, resulting from non-payment/non-application of permits/licences to keep animals in captivity other than rehabilitation centres," the report reads.

A selective approach to enforcing the law appears to be behind the claims that N/a'an ku sê and its owners are receiving favourable treatment from the authorities.

* This article was produced by The Namibian's Investigative Unit and the Advancement of Journalism Centre.