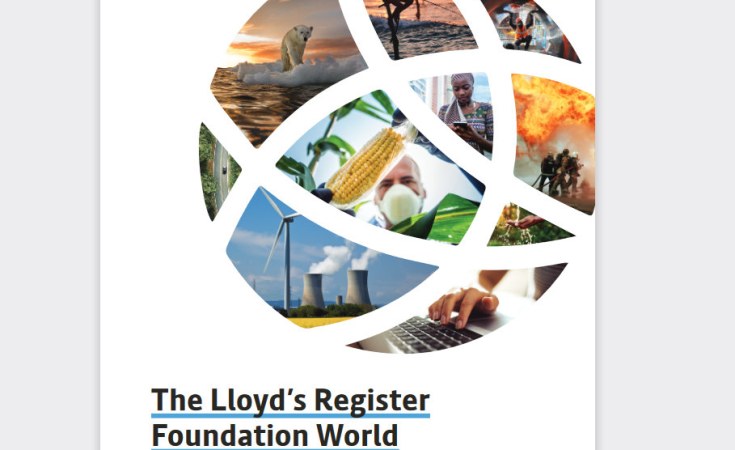 The world renown Gallup Poll in partnership with Lloyd's Register Foundation released their new Worry, Experience Harm/Risk Government Safety Performance Index (GSPI) indices as part of their World Risk Poll , which covers some 142 countries, of which 39 were African nations.

The polling done in local languages with males and females participants aged 15 years and above highlights the worries, harm or risks of those who were surveyed. The World Risk Poll (and its three indices) - is set to repeat four times over the next six years - with compiling for the 2021 questionnaire already under way. It is likely that the next installation of the poll (and its three indices) will show even starker reactions on these overarching themes of worry, harm or risk as a result of the world having been under a full year by then of Covid-19.

Some of the specific themes included in the three indices focused on a range of climate change issues from severe weather to food security and, food and water safety; violence, crime, and conflict; safety and harassment in the workplace (particularly against women); infrastructural challenges, online threats; the role and impact of future technologies uses (e.g. artificial intelligence, etc.) on their lives; and, whether or not people trust their government.

Why the Indices are Important & What They Say

Many of the above themes are important for review by national governments, foreign policy makers, national security leaders, development donors, and are, in some ways, key elements within the United Nation's (UN) Sustainable Development Goals (SDGs) .

Thus the indices are important tools for those working in these areas, because so much attention, focus and money over the last two decades have gone toward and continues to go toward (as it should), tackling global poverty and conflict as well as seeking to make people feel safe.

This includes improving quality of life, encouraging democracy and human rights; and, providing assistance to climate sensitive environments (although the U.S. certainly has not done its part on climate change in the last 18 months or more). Thus, the responses in these three indices demonstrate that despite a lot of work and commitment on many of these goals, people are not necessarily feeling safe from harm or risks, and that "moving the needle," could be even more challenging than previously anticipated, requiring more adjustments in strategic planning, policy, and resources than foreseen.

This is especially daunting for regions like Africa, Latin America, and Southeast Asia . We already know that according to the World Bank's October 8, 2020 Report that COVID-19 alone will push another 40-50 million people around the world into poverty on top of the 2019prior pandemic figure of 736 million . COVID erases nearly five years of development work, and pretty much wipes out a lot of the progress made under the UN SDGs, with Sub Saharan Africa and Asia being the hardest hit, followed closely by countries like Brazil .

Understandably experiencing harm or risk, their attendant issues of fear and uncertainty, are tough things to measure, but these new indices do a very good job of putting the data into a global perspective. Further, it is clear that many of the responses by those living in Sub Saharan Africa were connected to climate change issues; internal social sector uncertainties in their own countries; conflict and infrastructural issues; and, negative reactions connected to online bullying, fraud, validity of information (fake news) and related cybercrimes. It was good to see that the economic impact and development benefits of new technologies usage, such as artificial intelligence, over the long term, had fairly positive responses.

What the Indices Mean as a U.S.-Africa Foreign Policy Tool

The biggest take away from the data for the 39 African countries covered in the indices clearly show that - for those of us focused on Sub Saharan Africa foreign policy, national security and development issues - it will be critical to pay more attention to these intangibles - worry, harm/risk and fear - in order to achieve more success on the substantive side of our work.

These data points should all be considered elements of development, security, and economic growth. Granted, it will be a bit of a challenge to find ways to restructure, regroup, and reframe some aspects of our foreign policy and development efforts in the region in order to factor in these intangibles. However, the results in these indices, demonstrate that this is a must-do, especially since most Sub Saharan Africa respondents said they felt "about the same," now as they did five years ago regarding their safety - meaning their sense of "feeling safe or safer" had not improved in five years.This underscores that whatever improvements in development or quality of life one might have had over the last 5 years, did not translated into people believing or feeling that they were still not in harm's way.

We can surely see in today's Africa that worry, harm/risk and fear, as regards to climate change, are being driven by things like devastating weather-related disasters and further desertification, increasing the number of climate refugees or internally displaced persons (IDPs). While others are connected to internal conflicts causing rollbacks on democracy (e.g.  Mali ,Tanzania); or, upticks in destabilizing activity (i.e. Mozambique's northern eastern provinces of Zambezia , Nampula and  Cabo Delgado have become an extremist hotbed in the last three years. NB: Speaking from experience, the U.S. needs to pay much more attention to this area through a robust Africa Command , and one that stays reasonable close to the Sub Saharan Africa region so it can remain fully engaged to avoid a larger Boko-Haram like conflict playing out there).

Of course, a lot has been done by donors, governments, the private sector and philanthropists. No one is discounting this. But we also know that more always needs to be done. But clearly these indices demonstrate that there are additional important gaps we need to consider.

Over the years we have all seen the increase in well-being surveys from organizations and institutions from around the world, which pull together a basket of key sectors on which to determine how people are doing. But what is different with these new indices is they reflect "how people are feeling." Many people in Africa, as well as all over the globe, are feeling worried as they feel unsafe, and fear harm or risk to themselves or someone they know -- a reflection of the uncertainty felt in the world in general way before COVID-19.

A few highlights, summary points and analyses from the three indices follow below regarding responses by Sub Saharan Africa participants in the Gallup-Lloyd's Register Foundation indices.

Ethiopia also had the highest negative rating at 60% on whether it is "doing a good job on providing safe powerlines," followed by Liberia and Nigeria at 49%, whereas the world median was 23% (NB: the recent gas and power-related explosions in Nigeria in March , September & October 2020 , and January , July & December 2019).

The other country that didn't fare well was Zambia at 47%, while Rwanda came in best in the region and the world at 13%, given that this was well below the world median of 23%.

Links to the resources and data from the Gallup-Lloyd's Register Foundation Worry, Experience Harm/Risk & GSPI indices are available here .

About the Author: Dr. Sanders FEEEDS® Advocacy Initiative holds an annual Africa-focused program with Gallup. However, this article was not solicited by Gallup or the Lloyd's Register Foundation, and represents the analysis done by FEEEDS®. Sanders, who holds a doctorate degree in information systems & communications, served as a senior career U.S. diplomat in such countries as Sudan, Namibia, Republic of Congo (where she was U.S. Ambassador), and as U.S. Ambassador in Nigeria and representative to Ecowas during the onset and further growth of Nigeria's Boko Haram. NB: Key countries such as Democratic Republic of Congo, Angola, and Sudan are not mentioned in the analysis above because those countries were not part of this edition of the World Risk Poll or its indices.