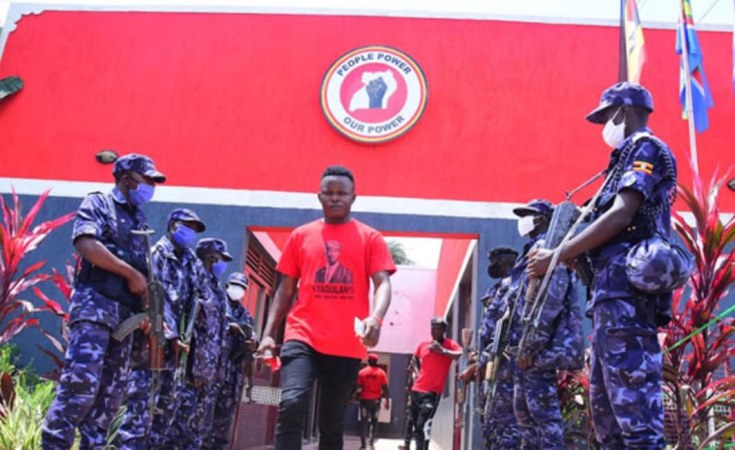 Security operatives Wednesday said their operation at the National Unity Platform (NUP) head offices in Kampala was intended to recover police and military stores being used by Bobi Wine supporters for political campaigns.

Police and the army raided NUP head office and several shops in different parts of Kampala where they recovered NUP branding materials including T-shirts and red berets.

At a joint press conference Wednesday evening, police and the army told journalists in Kampala that it was illegal for civilians to wear berets, matching outfits, insignia, camouflage fatigues and boots similar to those of armed forces.

Search operations were conducted in different parts of Kampala such as Kamwokya, Makindye, Kiyembe (Luwum Street), Mulago, Bwaise and Kawempe, with the police spokesperson, Mr Fred Enanga, saying, it was intended to stop the production of unauthorized uniforms by illegal manufacturers, suppliers, distributors and sellers.

"Wearing uniforms that are a preserve of the armed forces is illegal behavioral which was escalating especially among some political groups and celebrities. It is a usurpation of the legitimate law enforcement and military functions which is a violation of the law," Mr Enanga said.

Several people were arrested for wearing the said clothing.

"There are rules for when someone can temporarily use what we call military stores. This operation is across the country and it's going to continue until we see nobody putting on anything related to military stores," UPDF Deputy Spokesperson, Lt Col Deo Akiiki said.

"We are not segregating (whether a beret is of any party color). Others have gone as far as putting on a rank of a Major General. Some of us have not even dreamed of putting them on yet we're in the line. But you blatantly put on and disrespect that insignia with its weight," he added.

Bobi Wine said Shs23 million meant for nomination of NUP MP aspirants and most of the party nomination forms with signatures were taken by security operatives who raided the party headquarters.

"They have also taken so many of our branding materials including posters, banners, berets, t-shirts, pens, notebooks, etc. Our CCTV cameras have been vandalised and equipment taken away. Some comrades have been arrested and are being held at Kira Road police station. I have also been informed that so many of our people who are selling NUP branding materials in town are being arrested with reckless abandon," the Kyadondo East MP, real name Robert Kyagulanyi posted on his social media platforms.

Bobi Wine, 38, has become a popular figure among the youth in a country where the median age is less than 16.

After more than 30 years in power, the 76-year-old Museveni is the only president most have known.

But since becoming an MP in 2017, Wine has been routinely arrested and put under house arrest, his concerts banned and public rallies dispersed with teargas.

Museveni, one of Africa's longest-serving rulers, had the constitution amended for a second time to allow him to run a sixth time in 2021.

For Politicians, Fashion Means More Than Just A Way of Dressing