South African High Court Prohibits Muslim Call to Prayer. Why It Got It Wrong 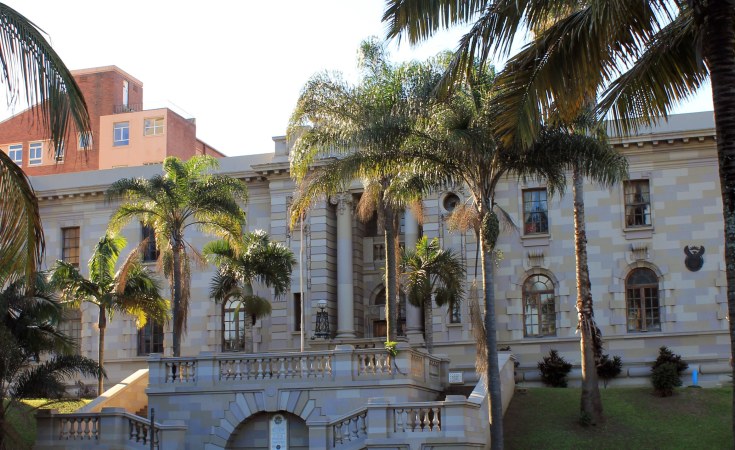 MengaZa/Wikipedia
The Durban courthouse of the KwaZulu-Natal Division of the High Court of South Africa (file photo).
The Conversation Africa (Johannesburg)
analysis By Helena Van Coller

The High Court in Durban, the port city in KwaZulu-Natal on the east coast of South Africa, has granted an interdict against a mosque, stopping its call to prayer (the athaan or adhan) because it can be heard from a neighbour's house across the street.

The neighbour had complained that the noise deprived him of the enjoyment of his property and interrupted his peace and quiet.

The court found that the constitutional right to freedom of religion did not guarantee the practice of the religion in the form of the call to prayer. And, as the neighbour is entitled to enjoy the use of his residential property, others, like the mosque, must respect this right.

Although the ruling and order were directed at the specific mosque in question, it sets a precedent. Another court can easily rely on this judgment in a future case.

In my view the court got it wrong for the following three reasons:

Firstly, it upheld the neighbour's right to the use and enjoyment of his property without any consideration of the reasonableness of the alleged disturbance. In other words, the court did not properly interrogate whether the mosque exceeded its powers, and if it acted reasonably in the circumstances.

Secondly, it ignored the fact that those being called to prayer also enjoy a constitutionally protected right to practise their religion freely.

Thirdly, it did not consider the noise control regulations in force in the city.

As a general principle of law in South Africa a property owner has the right to freedom to enjoy their property free from a noise nuisance. But, like all rights, this right is not absolute.

A property owner has a duty to exercise their rights within the normal and acceptable limits of reasonableness, and not to infringe on other owners' right of enjoyment of their property. South African neighbour law also requires property owners to tolerate a degree of nuisance from their neighbours.

The Noise Control Regulations of 1992, under section 25 of the Environment Conservation Act 73 of 1989 , empower provinces and municipalities to have their own bylaws regarding noise control.

Since 1996, municipalities have administered noise regulations with support and oversight from the provincial governments. Various municipalities have enacted noise and nuisance bylaws. Most of these distinguish between a "disturbing noise" and a "noise nuisance".

The eThekwini Municipality: Nuisance and Behaviour in Public Places Bylaw of 2015, prohibits a noise that impairs the convenience or peace of any person. The complainant's suburb, Isipingo Beach, and the mosque fall under this municipality.

A disturbing noise is a scientifically measurable noise level above a certain ambient sound level. In the average home setting during the day, 50 decibels would be regarded as normal. This drops to 40 decibels at night.

But different people may react differently to the same noise or sound. So in practice it's useful to look at the level beyond which a significant number of reasonable people could be expected to start complaining.

Noise nuisance - which is the issue in this case - is more subjective. It relates to a noise that disturbs or impairs the convenience or peace of any person. The various noise control regulations prohibit both forms of noise.

Any sound that qualifies as a noise nuisance can be regulated on national, provincial or municipal level. This includes the Muslim call to prayer and church bells.

Even a noise that has strictly speaking passed the scientific test required for a noise disturbance might still be considered a noise nuisance if found to be unreasonable.

Religious activities such as a muezzin calling from a mosque and the ringing of church bells on Sunday mornings are ways in which believers express and practise their beliefs.

These practices form part of the right to freedom of religion, protected under section 15 of South Africa's constitution. It should be read together with section 31, which guarantees the right of a person belonging to a religious community to enjoy and practise her religion with other members of that community.

The policy of another municipality, Tshwane, is a good example of how the athaan and the ringing of church bells should be handled. It states that such acivities should be seen as socially acceptable activities, which

must be accepted by all as a healthy aspect of our urban community life, albeit as diverse groups and individuals within a community.

Importantly, these activities must still be conducted in a reasonable manner. The noise levels must not be excessively loud or take place at unreasonable times, such as at night. Otherwise these community activities should be allowed.

The court ignored these requirements. The noise in question was not amplified and was relatively minor, and thus reasonable in the circumstances.

As both the right to enjoy one's property and the right to freedom of religion are not absolute, a fair balance has to be struck between them.

Given the judgment's adverse implications for the Muslim community and other religious institutions faced by noise complaints, the mosque should appeal the ruling - all the way to the Constitutional Court.