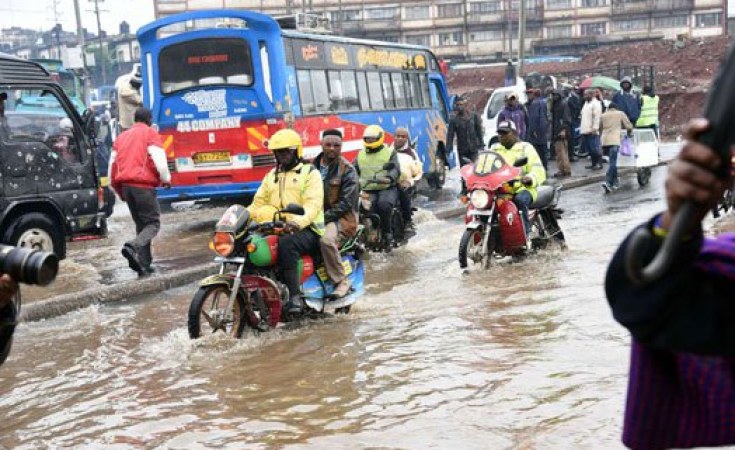 Evans Habil/Daily Nation
Motorcyclists ride through a flooded section of a road in Nairobi (file photo).
The Nation (Nairobi)
By Elizabeth Ojina

Some schools in Nyando constituency have been forced to merge due to flooding. They have moved learners in Grade Four, Class Eight, and Form Four to other schools not affected by floods.

Kisumu County Director of Education Isaac Atebe said about six schools have been totally submerged. Pupils in Kandaria Primary School have been relocated to Ugwe Primary. A majority of the pupils also lack face masks.

Kandaria Primary headteacher John Obong'o said the school is relying on parents to provide the protective gear to their children.

"Our school was affected by floods. As a result, we are being hosted at Ugwe Primary School. We have 64 pupils in Grade Four and 40 in Class Eight," he said.

Kakola-Ombaka chief Jacob Ongudi told the Nation that quite a number of schools in his location had to be closed. Students at Ombaka Secondary School have been transferred to Ombaka Primary School, while Kandaria Secondary School's Form Four students were moved to Nduru Secondary, a few kilometres away.

"This merger was done after an assessment by the education officers who visited these schools before the reopening date," said Mr Ongudi.

Teachers Service Commission (TSC) Kisumu director Ibrahim Rugut said learners affected by flooding will have to be relocated and housed by schools in drier parts.

"This means we will also transfer teachers to follow their pupils," Mr Rugut said.

"Nothing much in terms of learning can take place in such an environment. As a result, some schools that were not affected by floods had to accommodate two-to-three schools," Mr Okello said.

The numbers were manageable, he added, considering that the government allowed only Grade Four, Class Eight and Form Four learners to resume classes.

"If we were to have all the students reporting back, then there would a crisis," he said. "We're facing a scarcity of adequate infrastructure and sanitation facilities in these schools."

Previous Story
Flood Victims Living in Wetlands to Be Caned Before Rescue, Warns Governor
Next Story
One Dead, Hundreds Displaced As Floods Sweep Through North Horr

Flood Victims Living in Wetlands to Be Caned Before Rescue, Warns Governor

One Dead, Hundreds Displaced As Floods Sweep Through North Horr