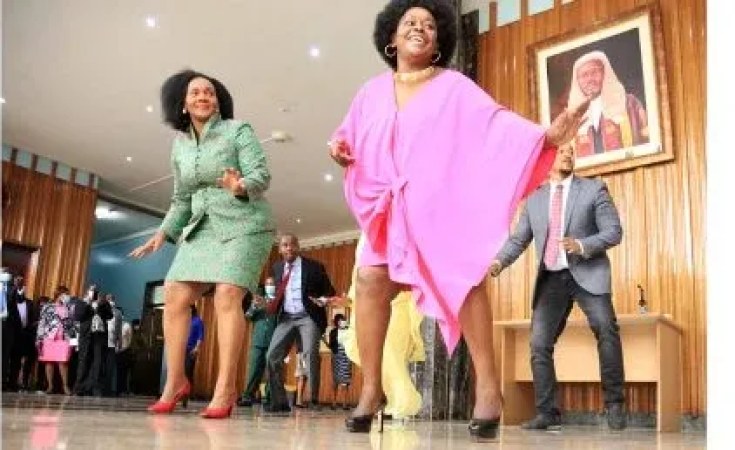 Jeff Angote/Nairobi News
Members of Parliament took time off from their legislative duties to do a jig as they dance to the viral Jerusalema dance challenge at parliament buildings on October 14.
Nairobi News (Nairobi)
By Hilary Kimuyu

Members of the National Assembly on Wednesday turned up in large numbers to take part in the world famous 'Jerusalema' dance challenge.

They were led by Majority and Minority leaders Amos Kimunya and John Mbadi and joined by other parliamentary staff as they lined up in the hallways of the House to worn on their moves.

The visibly excited MPs made a two-line queue and cheered each other on as they made their own 'choreographed' dance moves.

Kimunya last week disclosed that the Parliamentarians had been practicing for the global dance challenge and were due to film the dance on Wednesday, October 14.

"We took this challenge to show Kenyans that there is peace in diversity, because we are drawn from different political parties and different regions," Ms Odhiambo started.

The Lawmakers had been practising for the challenge for the last few days to make it perfect and shoot their own version of the challenge that has been also been taken up by corporates.

All around the world, individuals, health care workers, police officers and priests among others, have been sharing videos while dancing to the song under the hashtag #JerusalemaChallenge.

The South African song Jerusalema by Master KG features vocals by Nomcebo and was released in December 2019 and has since received such an immense reception online that it was later included on Master KG's second album that was released in January 2020.

The song, which premiered on YouTube in December 2019, quickly grew to become a favourite of many and has garnered over 184million views so far.

It then went viral during the Coronavirus lockdown period leading to the #JerusalemaChallenge incorporating various moves and trended on various social media platforms.

With its haunting chorus line referencing the holy city, the song does have religious lyrics in Zulu, but its upbeat tempo means its greatest reach has been outside the walls of any church or synagogue.

The Kenyan legislators' version of the dance challenge is expected to be released on Mashujaa Day.