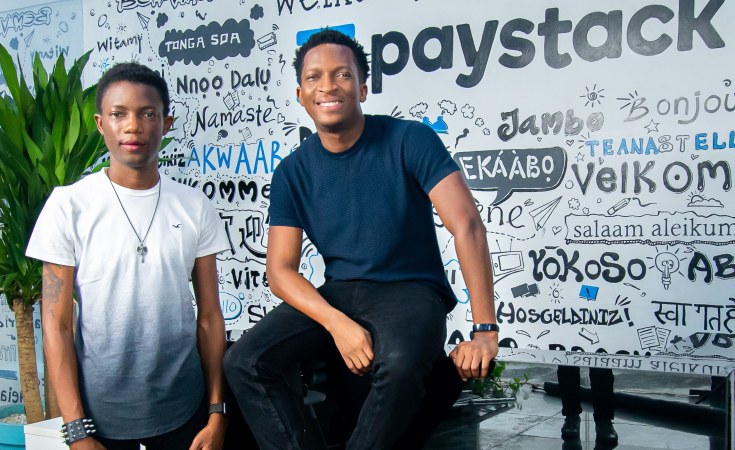 This is "the biggest startup acquisition to date to come out of Nigeria, as well as Stripe's biggest acquisition to date anywhere," according to TechCrunch, which says terms of the deal have not been disclosed "but sources close to it confirm that it's over $200 million."

"The Paystack acquisition will have a ripple effect across our entire ecosystem," Cameroonian tech entrepreneur Rebecca Enonchong, who is CEO of the Maryland-based enterprise applications provider AppsTech, said in a Tweet. "Investors are getting a pay day! She addded congratulations to local investors "who believed in these founders early on!"

This is major!" In another Tweet about the announcement, Nigerian-based Tech Cabal noted that some are calling this "the deal of the decade." In an analysis of the deal, TechCabal said in the The Next Wave newsletter: "Africans should be building these great products, and Stripe's move to have Paystack all for itself signals there is a global demand for African ingenuity."

Paystack CEO and co-founder Shola Akinlade said in making the announcement: "We'll be acquired by Stripe to accelerate online commerce across Africa."

The deal comes as opportunities are exploding for innovation in financial technology. "A youthful population, increasing smartphone penetration, and a focused regulatory drive to increase financial inclusion and cashless payments, are combining to create the perfect recipe for a thriving fintech sector," said a report issued last month by McKinsey.

Stripe noted that the two companies have been working together for several years, beginning in 2018 when Stripe led Paystack's Series A financing round. In July 2019, Paystack hosted a Stripe team  in Lagos (Facebook album), where developers from both companies "came together to share with each other what they were working on."

"The African internet economy is expanding quickly, with online commerce in the region growing 21% year-over-year, 75% faster than the global average," Stripe said. "The African tech ecosystem is expanding very rapidly," Stripe CEO Patrick Collison said in a Tweet. "We and the Paystack team are eager to invest in a big way over the years to come."

"Paystack merchants and partners can look forward to more payment channels, more tools, accelerated geographic expansion, and deeper integrations with global platforms," Shola Akinlade, Paystack CEO, said in his announcement. "We will continue to execute against an ambitious roadmap with the support of Stripe's resources and deep expertise."

Akinlade described his company as "114 friends of 12 nationalities, currently working remotely across 9 countries." He said more details of future plans will be shared, "but this isn't the time for it."

Referencing the widespread #endSARS protests in Nigeria demanding police reform, he said: "We don't want to draw attention away from the very serious conversations happening at all levels about police violence in Nigeria, especially against young makers. As a maker myself, and member of the tech community (a frequent target of the attacks) this matters deeply to me and to everyone at Paystack," Akinlade said.

"This feels like a pivotal moment; young Nigerians changing their country through civil agitation on the streets and commanding the world's attention in the boardroom," Tech Cabal noted. "Maybe, just maybe, Africa is finally rising."

For investors and African start-ups, the Stripe/Paystack announcement sends a positive signal that could help encourage more deals. "Exits accelerate venture capital investment into the region," said Aubrey Hruby, an Africa-focused investment advisor and co-author of The Next Africa: An Emerging Continent Becomes a Global Powerhouse.  Investment flows into Africa have been rising steadily, she told AllAfrica. "Steller exits such as this bring global visibility to the African entrepreneurial ecosystem and show investors that they can get a return on their early investments."

"This deal will also make other high net worth individuals, who have stayed away from investing in startups, have FOMO (fear of missing out)," Enonchong said in a follow-up Tweet. "They will want to be a part of the next success story."

Venture investment across Africa "has increased (roughly) by a factor of four over the last five years, to around $2 billion in 2019," according to reporting in Tech Crunch by Jake Bright, Hruby's Next Africa co-author. The most recent rise has come in the fintech sector, where "he opportunity investors and founders are chasing is bringing Africa's large unbanked population and underbanked consumers and SMEs online."

In a counter offensive, Standard Bank – the largest bank by assets on the continent - "is planning to scale-up some of its operations on the continent and further digitize its systems to fend off fintech firms encroaching on its client base," Bloomberg reports.

"In the past three years, fintech investments in Nigeria grew by 197 percent, with the majority of investment coming from outside the country," according to the McKinsey report. "Fintechs have led with innovation in product development, designing useful, convenient and affordable financial products and services for millions of Nigerians."