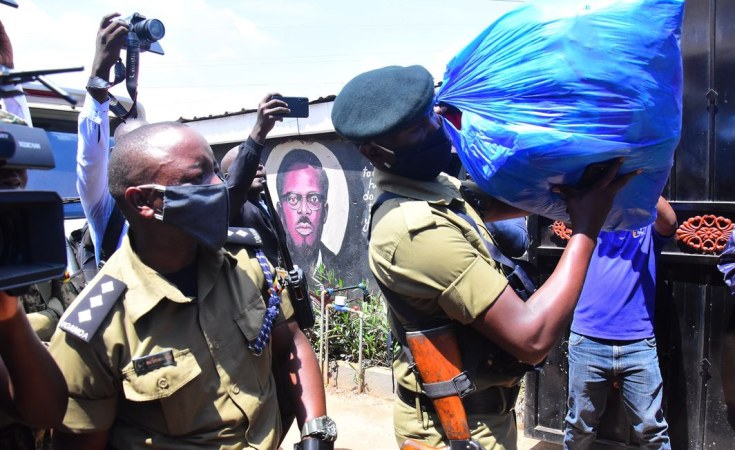 NUP President Robert Kyagulanyi, aka Bobi Wine, and other party leaders were meeting youth leaders when security raided party headquarters in Kamwokya on the eve of parliamentary nominations.

Mr Kyagulanyi, who wants to contest for presidency in the February 2021 polls addressed the youth before later escaping through the backdoor.

NUP officials said security took away Shs23 million in cash and 7,000,000 signatures the party had gathered to support the nomination of their Presidential flag bearer, Mr Kyagulanyi and other flag bearers.

But the search warrants signed by Assistant Superintendent of Police Jane Imalingat, ASP Bwonanebye, detective Constable Juliet Sajja and detective Assistant Inspector of Police Wamakale did not capture money and the missing signatures among the impounded exhibits. The warrants were signed by NUP officials who witnessed the search.

Enraged NUP leaders narrated how security broke into six different offices and took away sensitive documents and other things. They targeted the party president's office, electoral commission committee office, office of the organising secretary, spokesperson, secretary general and the deputy as well as the treasurer.

Bobi Wine told Daily Monitor that the police and army had defiled the sanctity of a well-established political party and raided them without serving them a search warrant and arrested many of their staff members.

"This is a sign that Mr Museveni and his regime are scared of us. This is something that should ideally scare us but the good news is that we are just growing stronger every day. We shall not stop," Mr Kyagulanyi said.

Mr Fred Enanga, the police spokesperson rubbished claims that the attack was targeting only NUP.

"We have carried out this operation in different parts of the city. It just that some of these political parties had military attires in their offices and we had to enter and get them. This operation will still continue because this contravenes both the UPDF Act and the Penal Code Act," Mr Enanga said.

Mr Deo Akiiki, the UPDF deputy spokesperson, also explained that "Such behaviour where you find civilians wearing attires that have the same design and colour of the military may make those people start running military groups. It started slowly but it had continued and our operation had to come at any time."

Police have denied taking other NUP belongings and signatures for the nomination of Bobi Wine and other MPs.

"We shall have a search certificate when the time of going to court comes. That is when we shall tell who is lying to who," Mr Enanga said.

Some NUP supporters sustained injuries while others were arrested from different parts city, including Bwaise, Makindye, Wandegeya and around the city centre as security retrieved red berets and other items.

The raid on NUP and other places came after Attorney General William Byaruhanga in a letter to the Minister of Internal Affairs on April 26, 2019, which was copied to, among others, the Inspector General of Police, pointed out that there is also no law barring people from wearing red berets..

Sunday Monitor would later establish that the Inspector General of Police, Mr Okoth-Ochola, forwarded copies of the Attorney General's advisory to all district police commanders on January 7.

Inscribed on the top right corner were the words: "Take note of this legal opinion of the AG."

According to witnesses, dozens of security officers led by the police arrived at the Kamwokya-based offices at around 11am and immediately sealed off the place. The search lasted for about two hours as witnesses looked on from a distance.

The party spokesperson, Mr Joel Ssenyonyi, said he had received intelligence information that there was a plan to arrest him and other NUP flag bearers to deny them the chance to be nominated today. This is not the first time police is raiding Opposition political party offices in an unexpected way.

In 2016, after the presidential elections where four times presidential candidate Dr Kizza Besigye rejected the results announced by the EC citing malpractice and irregularities, security officers forcefully entered the FDC headquarters and picked declaration forms in which the party was tallying its own results.

In August last year, Police raided offices of the Democratic Party youth wing, the Uganda Young Democrats (UYD), and impounded T-shirts bearing the words "Rest in Peace" in memory of Yasin Kawuma, the driver of Bobi Wine, who was shot dead during the Arua by-election violence last year.