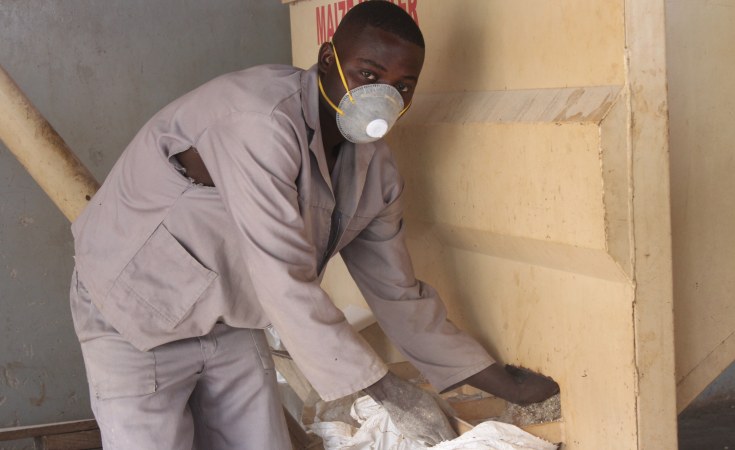 GAIN
WINNUA in Mozambique intends to improve working conditions for their staff, resulting in a healthier and motivated workforce.
Global Alliance for Improved Nutrition (Geneva)

Every morning when Asa Tham looks out the window of her food processing plant, she spots the same six men squatting quietly under a mango tree waiting to scrounge work carrying loads, doing minor repairs and other non-skilled labour jobs.

Tham runs her maize milling, soy milk and food fortification business from just outside Mocuba, a transportation hub that lies near the centre of Mozambique. The town of approximately 170,000 is located in Zambézia, a fertile region known for its rich soil and impoverished residents.

But these days the men wait and wait and then wait some more. They’re patient but fatalistic. “Why do you continue to wait?” Tham asks them. “Because there is no work anywhere else,” they reply. “We have nothing to eat”.

Their plight is by no means unusual. The COVID-19 pandemic—and more specifically the response—means the population of one of the world’s most impoverished countries is facing looming hunger that is likely to worsen during the coming lean months.

Tham is trying to change that. Her company, WINNUA, which means ‘to grow’ in the local language, produces fortified maize, fortified soy-corn porridge (CSB) and soy milk for distribution both locally and within Mozambique.

Nevertheless, prior to receiving a grant from the Global Alliance for Improved Nutrition (GAIN), WINNUA was threatening to sink after months of struggling to stay afloat. Twenty-five percent of her 32 staff (6 women and 26 men) were laid off or furloughed, while production dropped from one tonne of fortified soy-corn porridge (CSB) per hour to only one tonne for all of August. Staff would come to work unsure whether each day would prove to be their last.

“ It is very hard to run a business in Mocuba,” says Tham, 60, who co-founded WINNUA in 2011 alongside Catholic Priest Filipe Jose Couto, 80. “Eighty-percent of the population are subsistence farmers, most have never gone to school and don’t know how to work for a company, because they’ve never learned how to.”

Widespread stunting, wasting and malnourishment may mean that the population will not thrive and survive as an ordinary one, notes Tham. Deficiencies often affect grandparents, parents and their children. According to the World Health Organization (WHO), an ongoing HIV/AIDS epidemic and its attendant co-morbidities such as tuberculosis, renders the population more vulnerable to the effects of malnutrition, which in turn increases their susceptibility to other diseases.

Poor infrastructure also represents a major hurdle. According to Tham, it costs the same to transport a kilo of maize from the plant to Mocuba 15 km away as it does to the far-off capital of Maputo in the south. Roads that are filled with potholes in the summer months become quagmires during the wet season. Producers are forced to factor in transportation costs, which in turn drive up prices.

Scaling Up Markets for Nutritious Food

In 2019, WINNUA applied and received funds from GAIN’s Scaling Up Markets for Nutritious Food , aimed at purchasing an instant porridge processing unit. The grant also enabled WINNUA staff to receive training in complementary food processing and quality control. With GAIN’s support, WINNUA launched a fortified corn-soya porridge (CSB) that they dubbed “ Sempre ”, for “Always” in Portuguese.

Today, WINNUA is once again fortifying maize with much-needed vitamins and minerals and has restarted its’ soybean milk programme. They are now distributing the milk to health centres instead of schools, which have mostly shut down. The company has resumed dispensing high-quality soybean seeds to local farmers thereby ensuring high-quality crops, while at the same time, helping farmers to earn the hard cash necessary to buy clothing, cooking oil and other staples.

WINNUA intends to improve working conditions for their staff, resulting in a healthier and motivated workforce

The GAIN grant is also being used to pay for personal protection equipment (PPE), antibacterials, soap, washing powder, chlorine and all of products necessary to reduce the transmission of COVID-19. WINNUA is providing staff with one glass of milk per day—a vital complement to a diet that is predominantly made up of cassava and maize: meals that fill the belly but do little to enhance nutrition.

“ These types of companies are a real Godsend,” says GAIN SMNF Senior Project Manager Luis Miguel Barata. “It is important recognise the hard work that she (Tham) does,” he says. “This is a very tough country and she’ll move mountains if she needs to.”

“ You have to be resilient to continue to have a business running in those conditions. I take my hat off to anyone who can run a successful business in Mozambique,” Barata added.

The work of WINNUA has never been more vital than during the current crisis Barata observes. While the pandemic has only exacerbated already existing and almost insurmountable difficulties—it is also highlighting the necessity of expanding in-country food production to feed a hungry population. Ninety percent of the country’s food supply depends on imports.

His words are corroborated in a recent “ Flash Appeal ” issued by WHO that reveals how dire the situation in Mozambique really is. Already reeling in the aftermath of two major cyclones that slammed into the country in 2019, Mozambique was also doused under one of the worst flood season in recent history . Malnutrition rates afflict nearly half the population.

The Current COVID-19 contributed to a decrease in demand for WINNUA’s products, therefore the company has also reduced their farming activities

Although (as of this writing) the virus itself is moving slowly, closed borders have resulted in food disruptions while the school lockdowns mean that children are no longer receiving in-school meals. Two years of drought has further eroded what little subsistence farmers manage to eke out from land that although highly fertile, remains largely uncleared owing to poor infrastructure, low investment, and minimal technical expertise. Food prices are spiking with no end in sight.

According to WHO, an estimated 67,500 children will require treatment for malnutrition in the next nine months. Currently, more than 3,000 children under the age of five are being treated for severe acute malnutrition (SAM) and there have been over 4,000 cases of pellagra (vitamin B3 deficiency) recorded since May 2019.

Barata observes that the coming ‘hungry season’ will only intensify the suffering as low-income populations run out of staples that were more available (and cheaper) during the harvest. Tham concurs. “People are telling me that, ‘the starving season is not yet upon us, but it will be’”.

For now, at least one small enterprise is not only keeping its doors open but is also ramping up production. In a time of want and suffering, fortified foods have never been so necessary and so important.

“Everyone benefits,” says Tham. “But the real impact is with the poor.”

Tagged:
Copyright © 2020 Global Alliance for Improved Nutrition. All rights reserved. Distributed by AllAfrica Global Media (allAfrica.com). To contact the copyright holder directly for corrections — or for permission to republish or make other authorized use of this material, click here.

Cameroonian Women Go Back to Their Roots With Natural Afro Styles
U.S., Canada and Africa