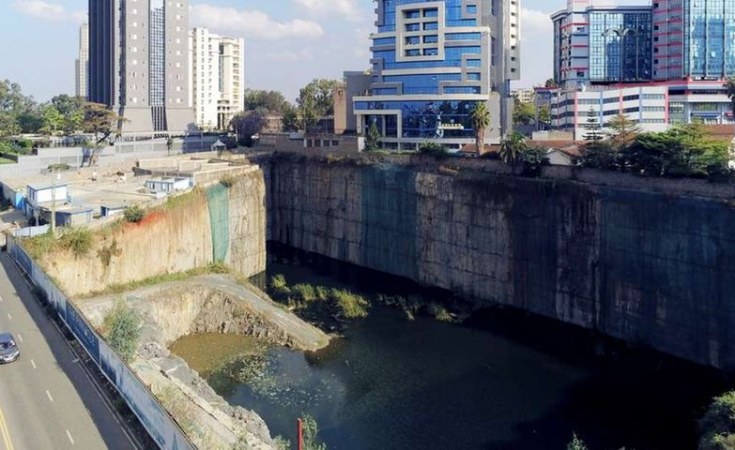 Jeff Angote/Daily Nation
The abandoned construction site in Upper Hill, Nairobi for what would have been the tallest building in Africa.
The Nation (Nairobi)
By Brian Wasuna

Investors of what was planned to be Africa's tallest building have moved to reinforce works at the construction site and announced that the dream to complete The Pinnacle Towers is not dead.

They added that securing finance and redesign of the project, which has not progressed since late 2018, is on the way.

"Landowners are planning to contact the National Construction Authority (NCA) to provide details of mitigation works to secure the construction site through reinforcing the perimeter wall and strengthening the surface through a process known as shoring," the developers said in a statement to newsrooms yesterday.

The Pinnacle Towers was being developed as a joint venture between landowner Jabavu Village Ltd and White Lotus, an Indian-based firm.

The developers of the building, which was to host the 45-floor Hilton Upper Hill hotel and a 70-storey apartments and office block, reacted after the NCA gave them 14 days to restore environmental safety at the site.

By yesterday, the developers had moved to secure the site through strengthening its perimeter so as to prevent unauthorised personnel to the grounds.

They had also started reinforcing the deep excavation on the site so that it does not affect the neighbouring property.

Since its launch, the developers had injected $20 million into the project for works, including piling and excavation running as deep as 60 metres.

"The demolitions of properties in parts of Nairobi from 2018 greatly impacted on international financing, leading to lowering of confidence in the Kenyan building and construction sector," the statement added.

"As a result, the foreign developers abandoned the project in 2019."

The property developers said efforts to look for other investors were hampered by the Covid-19 pandemic "which not only affected banking and finance but also shook the hotel and tourism industry.

They added that the effects of the pandemic put on hold massive development projects like The Pinnacle Towers "not just in Kenya but worldwide".

They also clarified that at no time did the courts issue an arrest warrant for Mr Mohamud Mahat Noor, who was formerly associated with the project.

The 300-metre skyscraper, which was to cost at least Sh20 billion, was to be completed last year.