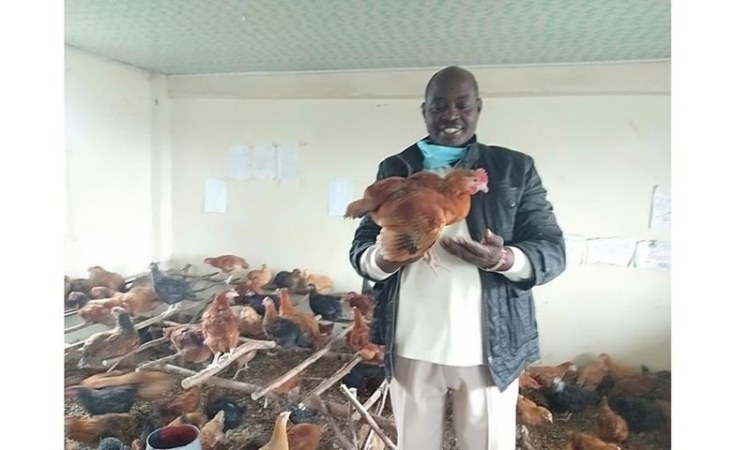 George Munene/Nation Media Group
Joseph Maina converted his school into a chicken farm after the government directed that all schools be closed following the Covid-19 outbreak.
The Nation (Nairobi)
By David Muchunguh

When schools welcomed Grade Four, Standard Eight and Form Four learners on Monday, it brought to the fore the huge economic gulf among Kenyans.

While some learners who have not had any form of formal instruction in seven months got back to rundown schools with overgrown grass, buckets for hand washing points and with no running water, others have the luxury of delaying their reporting as they have been offering instructions effortlessly.

While teachers and learners in public schools will undertake a crash programme to squeeze the second term curriculum content into 11 weeks, those in some private institutions are already in the third term work.

Despite the different circumstances, learners in all these schools will sit the same national tests.

The gap gains astronomical proportions when public school learners are compared to their counterparts in international schools.

Learners from Kathuriri Primary School in Embu County, for example, will remain at home longer.

They were turned away on Monday as their school has no toilets.

Kathuriri is one of the many public schools struggling to put in place the right infrastructure to comply with the Ministry of Education guidelines meant to keep Covid-19 at bay.

Public primary schools, attended by a majority of children, are most unprepared to cope with challenges posed by the pandemic.

Classrooms in most of these institutions, especially in urban areas, are congested - at times having more than 100 learners.

Social distancing will obviously be the greatest problem the schools will face when the other children are recalled in just two weeks.

This is in sharp contrast to classrooms in middle-level and upmarket private schools, where even before Covid-19, the average size was 25.

Private learning institutions have been pressing for the resumption of in-person schooling, saying they are compliant.

International schools have also been allowed to reopen. Most of the challenges faced by public schools are alien to them.

Brookhouse in Nairobi, for instance, instructed learners and employees to go for a Covid-19 test 10 days before reporting to school.

They must undertake "appropriate self-quarantine for 10 days before the school reopens.

The students and workers have been told to avoid social and public gatherings, according to a return-to-school handbook Brookhouse has published.

And when the students report back, a team will be deployed to clean and sanitise every area used at the beginning and end of every day.

Every student will be provided with a safety pack containing branded face masks, sanitiser and information on the virus.

International schools have stipulated staggered arrival and pick-up times. This is not possible with students and pupils in public schools who have to use matatus and other public service means of transport.

As public schools shop for hand-held thermo guns, learners in some private institutions have been given a unique QR code that records their temperature and sends it to a central analysing device and their parents' mobile phones.

Learners and teachers in public schools had hoped that the government would provide them with face masks and personal protective equipment as earlier promised.

Later, Education Cabinet Secretary George Magoha went back on his word, leaving them to their own devices.

A number of them reported to school without the masks or those of poor quality.

Some of the washable ones are made of simple cloth and not three-ply as recommended.

At Makini School, Nairobi, parents were invited to inspect the measures put in place to protect their children on Monday, a chance rarely granted to Kenyans with children in public schools.

Satisfied with the preparations, they sent their children to school yesterday.

The turnout for Form Four was put at 90 per cent whereas that for Grade Four and Standard Eight was 80 per cent.

Previous Story
Why 55,000 Learners Have No School to Return to
Next Story
Foreign Affairs CS Calls for Girls' Protection as Schools Reopen

Why 55,000 Learners Have No School to Return to