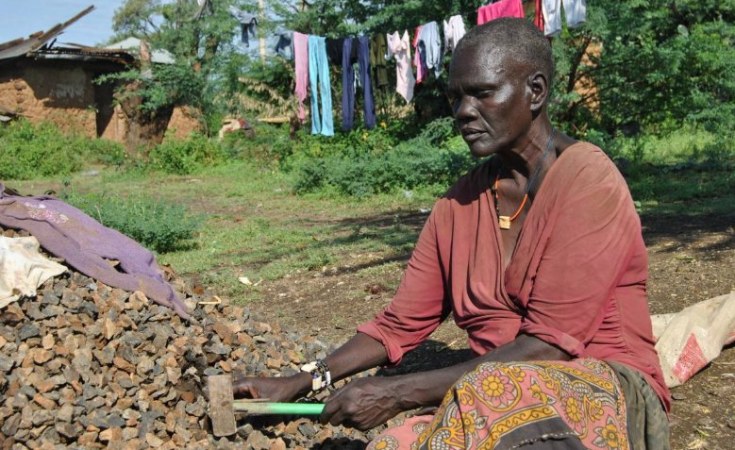 For 50 years, Ester Yokoi has been drinking water from Kenya's Lake Baringo, and for 50 years it has been poisoning her.

Yokoi is one of several thousand villagers to develop a bone-weakening disease due to the lake's dangerously high fluoride levels, officials said, leaving her unable to walk and too poor to afford medication, or even safe drinking water.

"I still drink the same water from the lake... What do you do when you're thirsty?" said Yokoi, 50, who lost the use of her legs 30 years ago.

Nowadays, the mother-of-six drags herself along the ground to the lake's shores to break up rocks with a metal hammer to sell as ballast. She barely survives and cannot save enough to buy bottled water or a rainwater storage tank.

Government officials and village elders said local people like Yukoi have developed skeletal fluorosis, a disease caused by fluoride accumulation that results in the weakening of bones and pain in the joints.

While men and children have also been affected, women have been hardest hit, and village elders said authorities have done little to help so far.

"We have sought assistance from both national and county governments but they only come here and promise to assist. To date, they haven't, said Joseph Lokuchei, an elder from Kampi ya Samaki village, where Yukoi lives.

About 34 people of the village's 245 residents suffer the painful disease, Lokuchei told the Thomson Reuters Foundation.

Francis Kipitirich, area chief for Salabani - which covers the villages around the lake - estimated that up to 4,000 people in 10 villages have been affected by skeletal and dental fluorosis, including many children who have developed bow legs.

Spanning 168 square km (65 square miles), the lake is a vital source of income for tens of thousands of people - from fishermen to farmers who rely on its waters for crop irrigation.

But Lake Baringo's waters also contain 55 milligrams of fluoride per litre - more than 35 times the amount recommended by the World Health Organization, according to a 2014 study by the state-run Geothermal Development Company.

A study by the University of Nairobi's geology department attributed the high levels of fluoride to emissions from volcanic activity in the East African Rift System.

Small amounts of fluoride are added to toothpaste and public water supplies to help prevent dental cavities, but prolonged exposure to high levels of the mineral causes dental and skeletal fluorosis.

"In a nutshell, it (high fluoride consumption) makes the bone more brittle and less strong, so it is more prone to deformities. In the joint, it can accumulate and cause some arthritis," said Tony Ndeda, a Nairobi-based orthopedic surgeon.

Ndeda said skeletal fluorosis tends to affect more women than men as women generally have a higher Body Mass Index (BMI), which is a measure of body fat.

"People with a higher BMI tend to develop arthritis much earlier in their lives than those of a lower BMI," he said.

As a young wife and mother, Yokoi used to make a living fetching water and firewood from the shores of the lake to sell to villagers.

But the disease has left her and hundreds of other women with such severe disabilities that their only option is the arduous, poorly paid work making ballast.

"My back and joints are so painful when I move or sit for long hours," said Sote Cherutich, 71, who needs two walking sticks to help her move among the stones.

"But I have no choice since I have to remain seated while working here crushing stones."

Cherutich said she had been given painkillers when she sought help at local government healthcare facilities, but had not been offered further treatment.

County government officials denied accusations that local residents were not being given proper care at public hospitals and said authorities were looking at ways to provide safe water.

David Cherop, chief officer for preventive and promotive health for Baringo County, said removing excessive fluoride from drinking water is difficult and expensive, so providing a safe alternative supply is a better solution.

"We are working together with the department of water to ensure that we set up water tanks in the area and especially tap into the rain water for the local people there," Cherop said.

But for Yokoi, it is too little, too late.

"They only come here and make promises during the election campaign seasons," she said.

"After that, we go back to drinking water from the same lake we have drunk from for decades."