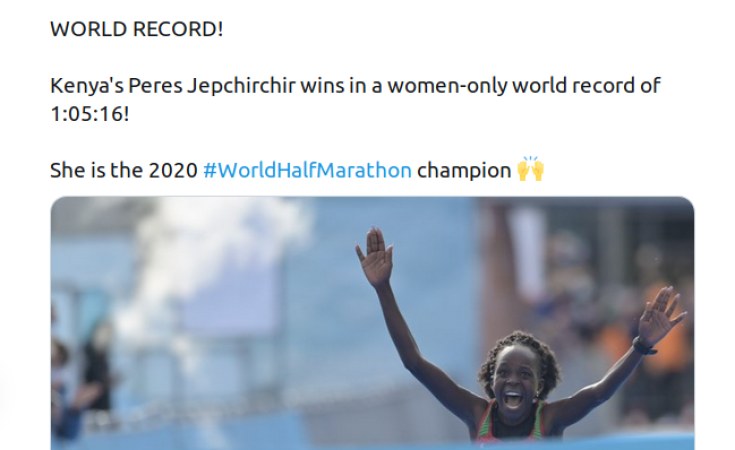 Nairobi — Kenya's Peres Jepchirchir outsprinted her opponents to reclaim the World Half Marathon title in a new Women's Only World Record time of 1:05:16 in Gdynia, Poland on Saturday afternoon.

During Friday's pre-race conference, Jepchirchir had warned that the world record of 1:05:34 she set in September in Valencia was in danger of falling due to the quality of the field

And with a spirited sprint in the final 500m, the Kenyan who won the title in 2016 proved her prediction right, slashing 18 seconds off her previous mark.

Germany's Melat Yisak Kejeta took silver silver in a women-only European record of 1:05:18 after beating Ethiopia's Yalemzerf Yehualaw with a sprint, the latter taking bronze in 1:05:19.

Meanwhile, Kenya's former world record holder Joyciline Jepkosgei finished sixth in a time of 1:05:58. She dropped out of the leading pack after taking a tumble in the final five kilometres tripping with Ethiopian Ababel Yeshaneh who finished a place above her. 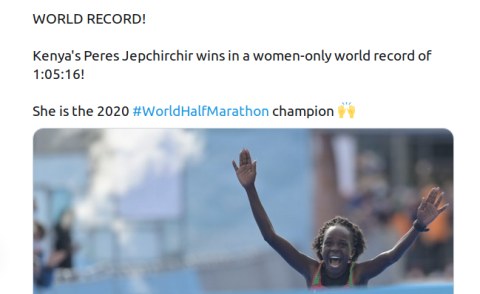 Kenya, Uganda Athletes Stun at World Half Marathon in Poland
Tagged:
Copyright © 2020 Capital FM. All rights reserved. Distributed by AllAfrica Global Media (allAfrica.com). To contact the copyright holder directly for corrections — or for permission to republish or make other authorized use of this material, click here.