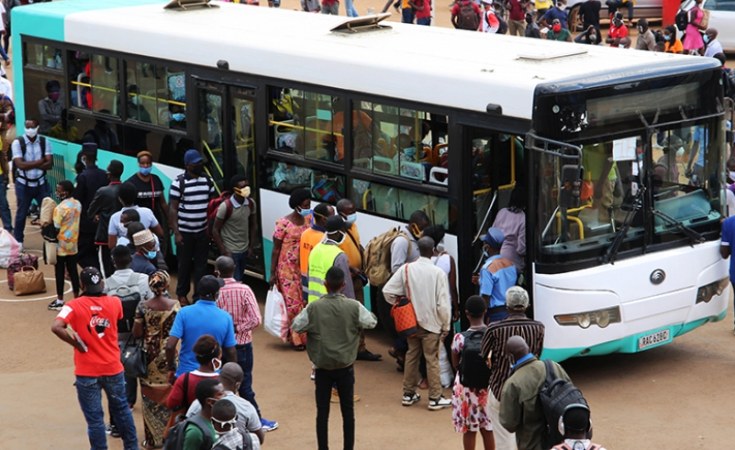 Craish Bahizi/New Times
Passengers queue to board a bus at Nyabugogo Taxi Park in Kigali.
The New Times (Kigali)
By Hudson Kuteesa

The rollout of public transport Generation 2 will be put on hold until further notice due to the adverse effects that Covid-19 has had on operators.

The virus, which paralysed the sector for the better part of this year, has made the operators less capable of making the investments that are required in the implementation of this strategy.

The system had to start operations this year, seeing the city move to a more advanced public transport scheme where, among other things, through use of information technology passengers would be able to know the closest bus stop, the time a bus arrives, and the route that the bus operates.

This is in addition to availing online timetables for bus movements.

The system also includes improved marking out of bus routes basing on the volume of the passengers.

However, these changes will not happen this year, due to the Covid-19 related challenges that have affected the finances of public transport companies - according to Lt. Col. Patrick Nyirishema, the Director General of RURA.

"The reason for putting Generation 2 on hold is the Covid-19 situation. It (Generation 2) required for example importing up to 100 new buses, but in the current economic situation it is so hard for operators to raise this kind of investment," Nyirishema said in an interview with The New Times.

"They (operators) have actually been making losses since we got out of the lockdown, so you wouldn't expect them to be raising capital to go and import more buses in that context," he added.

The new system of public transport would require large investment by public transport operators in form of expanding their bus fleets, hiring more workers, and establishing good financial systems for accounting and good management of operations.

Such investments could not be raised easily by bus companies since after the lockdown, buses have been carrying passengers at about 50 per cent capacity, or slightly more.

And this meant less income, he said.

Nyirishema told The New Times that after RURA put in place a new transport tariff they (RURA) will keep monitoring the situation and see if their economic situation normalises, before setting a new date for Generation 2

"Now we have issued new prices for bus fare which should normalize the operation. So we are going to continue monitoring the situation. Depending on how things move, we will have a clear picture in the next couple of months," he said.

Innocent Twahirwa, the Managing Director of Jali Transport Ltd, one of the major public transport firms in the country told The New Times that they have experienced hard times during Covid-19, and even the salaries of their drivers had been reduced due to financial constraints.