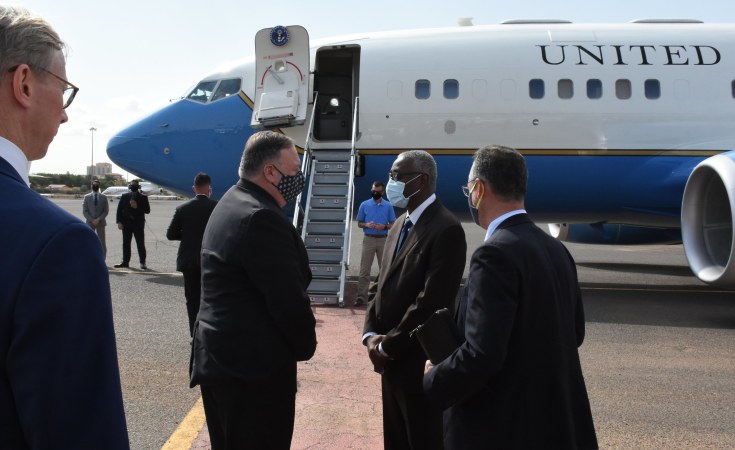 After twenty-seven years on the US State Sponsor of Terrorism list, President Trump today announced, via Twitter, that Sudan's terror designation was at long last being removed. While many details of the deal struck between the Trump Administration and the transitional authorities in Sudan have yet to emerge, the announcement by itself should be welcomed as a major achievement for both Washington and Khartoum. The troubled relationship has officially been reset and a new chapter has begun.

For the increasingly beleaguered transitional government of Prime Minister Abdallah Hamdok, and the rest of Sudan, the news comes in the nick of time. With inflation exceeding 200 percent and the Sudanese pound falling to 262 against the dollar (down from 82 when the civilian government came into office only thirteen months ago), Sudan's economy is in freefall. Bread and fuel lines across the capital, Khartoum, are longer today than when President Bashir was in office, and talk among the people stuck in those lines invariably is turning to disgruntlement over the government's handling of the crisis.

While Sudan's removal from the terrorism list won't do much in the short term to alleviate the economic pain, it provides a monumental political win for the transitional government, which came into office pledging to remove Sudan from the list and remake the country's relationship with the rest of the world. Removal from the terrorism list was the government's ultimate prize and brings with it a precious injection of political capital that, at a minimum, will provide more time for the government to try to get its economic house in order and make good on the promise of delivering a lasting democracy dividend to Sudan's long-suffering population.

For Washington, the decision to remove Sudan from the list is significant for a number of reasons. Many will view it as a vindication of the Administration's "America First" approach to foreign policy, given the President's framing of the deal as bringing in millions in compensation for American victims of Sudan's past terrorist acts and the still-expected announcement of Sudan's normalization of relations with Israel, perhaps as soon as this week. But Trump drove a hard bargain when hard bargaining wasn't required.

In the end, the concessions won from Sudan come at a cost to the United States. Arguably, Washington's hard-nosed approach to negotiations with Sudan over the last few months has served to alienate our friends and allies in Europe and Africa, who are themselves anxious to see the terror label lifted, and further contributed to a rising tide of anti-Americanism inside Sudan (which the United States now hopes to partner with across a host of fields, from counter-terrorism to trade). Washington must now work to ensure that the cost of its achievement isn't pyrrhic.

In the two weeks left before election day, the Administration would do well to frame Sudan's unshackling from its terror list as not merely a one-off diplomatic win or an added vindication of its Middle East peace plan, but instead, as a step towards the greater cause of achieving peaceful democratic transition in the Horn of Africa and beyond. This would be a stark departure from the Administration's overall indifferent approach to democracy promotion and a small, albeit, counter to the narrative that Washington values stability over democracy. Going forward, Sudan has the potential to demonstrate that these goals are not mutually exclusive and set an example for the wider region.

Washington should also immediately take steps to make good on the long list of inducements promised to Sudan in exchange for Khartoum's likely soon-to-be announced normalization of relations with Israel. While the White House document detailing the specifics has yet to be released, the long list reportedly includes:

Additional development and humanitarian assistance reportedly worth hundreds of millions more than even current aid levels, and including surplus wheat and medical supplies the Sudanese people desperately need;

A US trade and investment conference for Sudan along with a high-level trade delegation to Sudan led by the Development Finance Corporation;

A pledge to engage the World Bank and International Monetary Fund to support and fast-track discussions on restructuring Sudan's $65 billion in external debt, clearing its more than $3 billion in arrears, and creating a pathway for debt relief under the Highly Indebted Poor Countries initiative;

Earmarks in the 2021 budget for the US share of debt relief to Sudan, likely to cost in excess of $300 million;

Removal of Sudan from the Administration's travel ban list; and

Engagement with Congress on legal peace legislation for Sudan that would finally resolve terrorist claims against it and provide for an orderly approach to addressing outstanding 9/11 victims claims.

In truth, most of these things would have already been in train if the Administration was truly committed to nurturing Sudan's democratic transition, staving off financial collapse, and deterring the return of military rule. Instead, the Trump Administration has kept the transitional government guessing, the Sudanese people's frustration mounting, and the military poised to step in to secure a final deal if the civilian authorities did not. (To their credit, Sudan's civilian and military leaders have largely kept their differing tactical approaches to these negotiations private, and have showed great discipline in forging a common position that hopefully leaves the transitional government stronger as a result.)

Fortunately, any sins Washington may be blamed for in its own negotiations will likely be quickly forgiven, assuming the Administration sets upon a quick and transparent implementation of the agreement. That must start with a formal notification to Congress as early as this week of its intention to remove Sudan from the terrorism list and immediate high-level engagement with Congress to ensure that it, in the first place, does nothing to derail the deal, and in the second, is able to reach its own agreement to grant Sudan its "legal peace" against any new terrorist claims. Coming in the midst of a re-election bid, the Supreme Court nomination, and COVID-19 relief negotiations, this could be asking a lot--but it is what is required if Sudan hopes to enjoy the maximum benefit from this agreement.

Similarly, the Biden campaign has a role to play in upholding this historic agreement. Khartoum remains rightfully anxious that a deal struck so close to a possible change in Administration could suffer a similar fate to the Iran nuclear deal. To put Sudan at ease and to signal to allies that the agreement has bipartisan appeal, Vice President Biden should offer an assurance that, should he inherit this deal next January, his Administration will abide by the its main points.

Ultimately, while this is a moment for congratulations and positive reflection on how much has changed in Sudan and in the US-Sudan relationship in the eighteen months since President Bashir was removed, it is also the time to look forward. With the anachronistic state sponsor of terrorism designation out of the way, expectations in Sudan are high, and the pressure for Sudan's young government to capitalize on this opening and accelerate domestic efforts to undo, reform and modernize the political and economic life of the country are even higher.

While it is in the United States' long-term national security interests to help in that endeavor, it can no longer be blamed for standing in the way. That alone is significant progress.

Cameron Hudson is a senior fellow at the Atlantic Council's Africa Center. Previously he served as the chief of staff to the special envoy for Sudan and as director for African Affairs on the National Security Council in the George W. Bush administration. Follow him on Twitter @_hudsonc.

Trump Ready to Delist Sudan As State Sponsor of Terror

Next Story
Tagged:
Copyright © 2020 Atlantic Council Africa Center. All rights reserved. Distributed by AllAfrica Global Media (allAfrica.com). To contact the copyright holder directly for corrections — or for permission to republish or make other authorized use of this material, click here.