Sudan: Trump to Remove Sudan From US Terror Blacklist 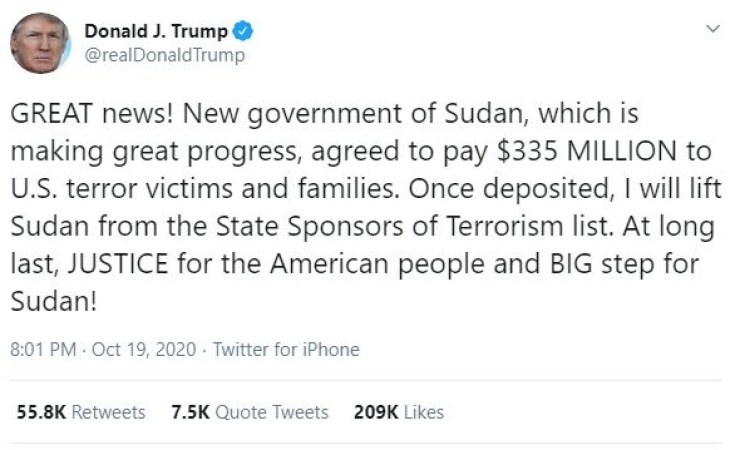 @realDonaldTrump/Twitter
The tweet in which U.S. President Donald Trump announced that Sudan is to be taken off the terrorism blacklist.
Deutsche Welle (Bonn)

The US president has said that he is willing to remove Sudan from a US terror blacklist once it pays an agreed compensation package to American victims and their relatives.

Sudan will be removed from a US blacklist of countries accused of sponsoring terrorism, US President Donald Trump said on Monday.

He said that the African country's year-old transitional government had agreed to pay a $335 million (€285 million) package to American victims of attacks and their relatives.

"At long last, JUSTICE for the American people and BIG step for Sudan," Trump posted on Twitter.

"Once deposited, I will lift Sudan from the State Sponsors of Terrorism list," he added.

Sudanese Prime Minister Abdalla Hamdok replied to Trump, thanking him for the move.

"We very much look forward to your official notification to Congress rescinding the designation of Sudan as a state-sponsor of terrorism, which has cost Sudan too much," he wrote.

Bashir, who was ousted by protests last year, had links with Al-Qaeda founder Osama bin-Laden.

The US said Sudan provided a safe haven for its operatives under his watch.

The package would compensate victims and families from a series of terrorist attacks, including the bombing of US embassies in Tanzania and Kenya in 1998, as well as an attack on the USS Cole in Yemen in 2000.

Sources quoted by the Reuters news agency said that the payment could pave the way for Sudan to recognize Israel.

The Trump administration has brokered similar peace deals between the Israeli government and Arab nations in recent months.

Both the United Arab Emirates and Bahrain have agreed to normalize ties with their former foe.

Asked whether an Israel-Sudan breakthrough was imminent, Israeli Finance Minister Israel Katz told Israel's Army Radio: "There are contacts, accompanied by the Americans, and there is complexity. I hope that the intensive contacts will yield positive fruit."

Earlier this month, Sudan's government signed its own peace deal with rebels aimed at ending decades of war in which hundreds of thousands died.

Previous Story
Sudan to be Removed From the Terror List. Now What?
Next Story
Trump Ready to Delist Govt as State Sponsor of Terror

Sudan to be Removed From the Terror List. Now What?

Trump Ready to Delist Govt as State Sponsor of Terror

Sudan's Removal From U.S. Terror List - Great News or Rip-off?
Tagged:
Copyright © 2020 Deutsche Welle. All rights reserved. Distributed by AllAfrica Global Media (allAfrica.com). To contact the copyright holder directly for corrections — or for permission to republish or make other authorized use of this material, click here.