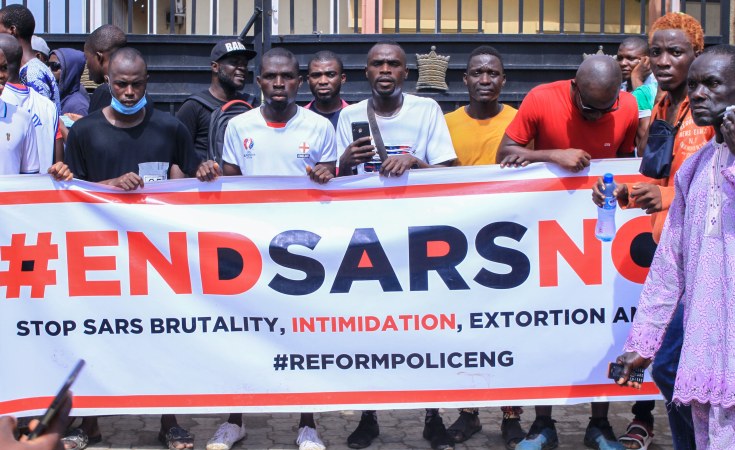 Tobi Oshinnaike/Unsplash
Witnesses said gunmen opened fire on a crowd of over 1,000 people in Lagos, and local news outlets and Amnesty International are reporting that people were killed during the latest #EndSARS protests, though the death toll remains unclear.
Vanguard (Lagos)

Following shooting of peaceful #EndSARS protesters at Lekki Toll Gate, with reports of casualties, ambulances and emergency workers that responded to calls were turned back by soldiers.

The driver of an ambulance driving away from the scene was heard telling someone, who was off camera, that military personal didn't allow them access to where the shot protesters were.

Vanguard had reported earlier that men in military uniform were shooting at the protesters, who had remained at the toll gate after Governor Babajide Sanwo-Olu of Lagos State had declared a 24-hour curfew.

A picture of Nigeria's flag stained with blood had since gone viral, with many people giving medical advice online on how to save the persons that had been shot.

The video had garnered over 70,000 views at the time of reporting, with over 3,00 retweets.

Ambulance just turn back they said the Nigeria ARMY didn't allow them to pass for them to rescue the life of the Nigerian youths in lekki tollgate... ..what a sad news 😭💔#Lekki #EndSARSImmediately #EndBadGoveranceInNigeria #EndPoliceBrutality pic.twitter.com/0xqFa6AbvJ
-- #sarsmustend (@amos_sylva) October 20, 2020

Nigeria's Osinbajo Promises Justice for #EndSARS Protest Victims
Tagged:
Copyright © 2020 Vanguard. All rights reserved. Distributed by AllAfrica Global Media (allAfrica.com). To contact the copyright holder directly for corrections — or for permission to republish or make other authorized use of this material, click here.