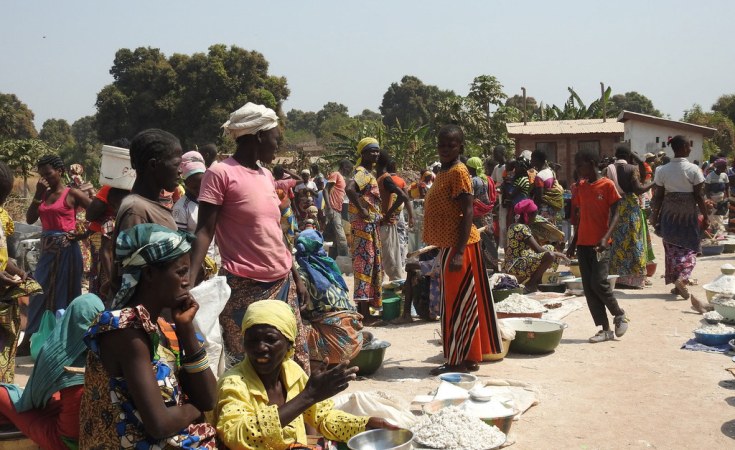 Washington DC — The international community has long favored trying to cajole the Central African Republic’s warring parties into doing less harm. But gaining leverage over the warlords and criminals who continue to profit from the country's violent dismemberment will require replacing carrots with sticks.

The Central African Republic (CAR), a former French colony based on an exploitative divide-and-rule system, is a textbook example of how a state can be captured, repurposed, and organized for looting, largely to the benefit of outsiders. In a country that has known only impunity, where the state is a murderous machine of plunder, is justice possible?

The CAR boasts bountiful natural resources, including oil, uranium, precious timber, diamonds, and gold. But they are controlled by violent criminal networks, which are linked to local politicians, external governments, and commercial interests, and rely on desperate, heavily armed young people. This fuels territorial conflict and arms- and natural-resource trafficking.

Beyond their ties to such criminal networks, the CAR’s leaders enrich themselves directly through government structures, which they have fashioned solely to advance their own interests. They use the country’s military – as well as militia groups – to protect their own power, even if it means using extreme violence.

In this context, the billions of dollars the CAR receives from donors and aid organizations each year amount to little more than humanitarian Band-Aids on gaping wounds. Last year, the United Nations Development Programme’s Human Development Index ranked the CAR 188th of 189 countries. The country has also been rated the world’s worst for young people.

The shocking stories of two women – Marie and Adjara – show just how devastating life in the CAR can be. Marie is a Christian woman in her early 20s. Her home region, the sub-prefecture of Alindao, is rich in gold and a base for a brutal militia of Muslim combatants. Terrified by the violence there, she and 12,000 other Christians fled to a camp for displaced people next to the church in the town of Alindao, close to where a United Nations peacekeeping contingent was based.

Marie thought she had found safety. Instead, she awoke one day to chaos, violence, and unimaginable trauma. The militia had attacked and were firing automatic weapons and rocket-propelled grenades at the camp and church, both of which they burned to the ground. During the attack, they killed up to 100 civilians, including Marie’s two young children, and raped many women. Marie herself was raped in the aftermath of the attack and became pregnant as a result.

Adjara is a Muslim woman in her mid-20s from Bangassou, a major city near gold and uranium reserves. One morning, a largely Christian militia overran her Muslim neighborhood. As she ran to the mosque, militiamen attacked with machetes, killing the infant son she carried in her arms. They then took Adjara to a room, where they kept her for 72 hours, raping her repeatedly. She now lives in destitution, plagued by memories of the horror she endured.

Their backgrounds put them on opposite sides in a splintered war zone. But when asked how to address the violence in their country, Marie and Adjara said the same thing: “Justice.” But how?

The clearest form of justice would be legal processes establishing the criminal culpability of those responsible for atrocities, either at the International Criminal Court, which has confirmed war crimes charges against two CAR warlords, or at the Special Criminal Court, an in-country hybrid body. Criminal justice, however, can be painfully slow, and typically only a few low-ranking militiamen ever face charges.

Another approach could focus on “network sanctions,” which should start by targeting those networks outside the CAR – the foreign profiteers and members of criminal organizations – who are complicit in violent exploitation there. Global banks, under threat of penalties by the US and European regulators for handling dirty money, should increase their scrutiny of CAR-related transactions to flag possible money laundering by natural-resource smugglers and transnational criminal networks.

Sanctions could also be imposed on those within the CAR who are involved in aid theft and diversion. Meanwhile, donor governments and institutions – particularly the World Bank, the International Monetary Fund, and the European Union – could link further assistance to ambitious governance and anti-corruption benchmarks. Functional audit mechanisms would help to ensure that funds and supplies are not diverted.

Finally, network sanctions and travel bans against corrupt officials and leaders of armed groups, along with their commercial collaborators, could be deployed more effectively. Freezing war profiteers out of the international financial system could help to alter the incentive structure in the CAR, so that it no longer favors violence over peace. The warlords who act as ministers or high-level government advisers – while their militias commit atrocities and loot the country – must be fired.

Furthermore, justice could be served by a more robust UN peacekeeping force that actively confronts and shuts down spoilers committing gross human-rights violations, smuggling resources, trafficking arms, or illegally taxing already impoverished victims. Enhancing the protection of civilians in major population centers, on roads, and at mining sites, including through the use of force, could reduce harm caused by armed groups.

Justice could also include more robust legal consequences for peacekeepers who engage in sexual violence or traffic natural resources. And a more systematic approach to compensating survivors should be devised.

Beyond forcing the perpetrators to face consequences for their crimes, justice in all its forms would provide leverage for those attempting to achieve peace, promote good governance, and protect human rights. Profiteers have vulnerabilities. Leverage can be built, and policy tools deployed to alter the CAR’s deadly status quo.

The international community has long favored trying to cajole the CAR’s warring parties into doing less harm. But the warlords and criminals continue to rip the country to pieces – and profit from its dismemberment. It is time for justice. It is time to start replacing carrots with sticks.

John Prendergast is Co-Founder, with George Clooney, of The Sentry and a co-author of Congo Stories.

Nathalia Dukhan is a senior investigator at  The Sentry .

Upcoming Election Might Test Stability in CAR - Crisis Group
Tagged:
Copyright © 2020 Project Syndicate. All rights reserved. Distributed by AllAfrica Global Media (allAfrica.com). To contact the copyright holder directly for corrections — or for permission to republish or make other authorized use of this material, click here.