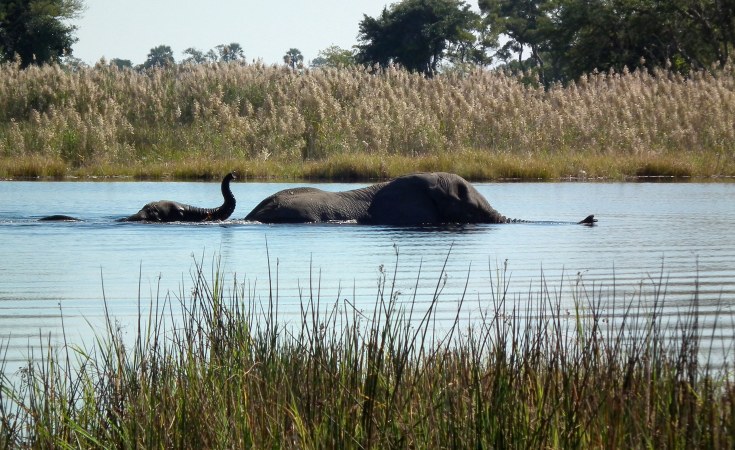 Bratislava — When hundreds of elephants died in the space of a few months in Botswana earlier this year, conservationists were shocked. Wildlife experts said it was one of the largest elephant mortality events in history.

But that shock quickly turned to exasperation over what they said was the government's slow, botched and untransparent investigation into the incident.

Now, Botswanan officials have said they have identified what killed the animals - cyanobacteria, a naturally occurring bacteria which can produce lethal doses of toxins - in water the elephants had drunk and bathed in.

But some wildlife experts and conservationists have questioned the government's claim, saying many questions remain and have criticised the lack of transparency from authorities amid fears of a deliberate rolling back of years of pioneering conservation work in the south African state.

"Questions remain. The whole way this has been handled is indicative of the approach of the Botswana government to transparency and openness," Mary Rice of the UK-based Environmental Investigation Agency (EIA), told IPS.

Between March and June, hundreds of elephants - the Botswanan government's official figure is 350, but some conservation groups claim it is as much as 700 - died in the country's Okavango Delta.

Many of the dead elephants were found near natural watering holes, others on trails. Some had collapsed on their chests, suggesting their death had been fast and sudden. Horrific scenes were also reported of dying elephants running around in circles, or with paralysed limbs.

Despite being alerted by conservation groups to the problem, it was June before the authorities said they were investigating.

International and local conservation groups criticised the government for its slowness to respond to the incident as carcasses - and vital evidence - rotted or were scavenged.

They also attacked its failure at the time to obtain proper samples or send them off quickly enough to expert laboratories to determine the cause of death and the sometimes confusing information given out by officials over what had been ruled out as the cause of the deaths and where samples had been sent for testing.

It was only late last month when the government announced that it had determined the cause of the death that it was finally confirmed samples had been sent to South Africa, Zimbabwe, Canada, and Europe. It is still unclear exactly where and how it was established that the neurotoxins were behind the deaths.

The authorities' slow response and lack of transparency in its handling of the investigation has sparked speculation the government may be hiding something related to the deaths.

One conservationist working with elephants who spoke to IPS on condition of anonymity, said: "Because of the government's actions, we are unlikely to ever discover the real reason so many elephants died in Botswana. We have to assume that the government has therefore achieved its objective."

Others say that it has at the very least given rise to some doubts the right conclusion has been drawn.

Dr Niall McCann, biologist and co-founder of the conservation group National Park Rescue, told IPS: "The lack of transparency in this process has left room for doubt. The Botswana government's explanation is a plausible one, but it doesn't make it right. The likelihood that it is something else is still there. It could be another disease or some other poisoning.

"The cause can only be definitively confirmed by examining the brains of the elephants in detail, but there is no chance of this now. The government's initial slow response means that we will probably never find out for sure what killed the elephants."

McCann is far from alone in raising questions over the government's claim.

Many experts have pointed to the fact that only elephants appear to have been affected while it would be expected other animals drinking the water would have been killed.

Rice said: "The big question is, why weren't other species affected?"

Others have asked why it would only occur in one small area.

One expert on elephant disease, who asked not to be named, told IPS: "This theory is severely compromised by the extreme localisation - if correct [animal deaths] would have appeared across the region."

Dr Pieter Kat of conservation group LionAid, who has extensive experience of wildlife diseases in Africa, wrote in a Facebook post that the government had failed to provide essential scientific information to support their claim that cyanotoxins were responsible for the animals' demise.

"The Botswana government has a long way to go to convince that the highly specific mortalities among elephants were directly related to neurotoxic cyanotoxins," he wrote.

When contacted by IPS about the elephant deaths, Botswanan government officials did not respond.

However, announcing their findings at the end of last month, government representatives suggested that individual species can be affected by neurotoxins in different ways - something experts say may be possible - or that because the quantity of water, and depths they drink from, is so much greater than other animals they may have been affected differently.

Mmadi Reuben, the government's principal veterinary officer, admitted though: "There are a lot of questions that still need to be answered."

This comes amid growing worries among conservationists over the government's attitude to the fate of what is the world's largest elephant population.

There are more elephants in Botswana than in any other country. Measures to protect large wildlife, including hunting bans and "shoot-to-kill" policies to deter poachers, have seen the population grow from 80,000 in the late 1990s to an estimated 135,000 today.

But conservationists have raised the alarm over a rise in poaching since Mokgweetsi Masisi became president two years ago.

Having promised to reduce the number of elephants in the country amid rising human-wildlife conflicts as the human population grows, Masisi last year lifted a ban on hunting elephants.

The ban had been introduced five years previously by his predecessor, Ian Khama, whose conservation efforts won international praise.

According to research published by conservation group Elephants Without Borders (EWB), there was a nearly six-fold rise in elephant poaching in the country between 2014 and 2018.

Not long after taking office Masisi gave stools made from elephant feet to the leaders of Namibia, Zambia and Zimbabwe, all of whom had been pushing for a ban on the sale of ivory to be lifted.

There have even been suggestions that the government's concerns over human-elephant conflict could have been behind the botched investigation.

One conservationist who spoke to IPS on condition of anonymity said: "Human-wildlife conflict is a major problem in Botswana. The authorities were slow to act on this at the start because they did not want to be seen to be devoting lots of resources to elephants at a time when they were dealing with a human pandemic."

Others see the government's handling of the incident as part of a wider, more sinister, and tragic approach to the country's wildlife by a corrupt regime in league with poachers and wildlife traffickers.

They told IPS: "Africa's least-corrupt wildlife haven and luxury tourism destination, known for its friendly, international cooperation and positive conservation models, appears to be entering an era of secrecy, exploitation and xenophobia.

"A culture of secrecy ... . is a tragedy for conservation, which requires a culture of openness and international cooperation to function.

"Individuals in the Botswana government are absolutely in the pockets of the poachers, as are some of the police."

On September 22, 27 Botswana Defence Force soldiers were arrested for wildlife trafficking, having just returned from the Okavango Delta region.

However, not everyone sees nefarious motives at the highest levels as being behind the way the investigation has turned out.

Philip Muruthi, a conservation expert at the African Wildlife Foundation (AWF), told IPS that while he felt officials in Botswana could have moved sooner on the investigation and been more transparent about its progress, "the Botswana government is serious about conservation. There are serious people there [in state administration] working on conservation".

He said that the explanation the government gave for the elephant deaths was plausible. "This has happened before, and while it is not a very common thing in Africa it does occur," he said.

But if the government's claim is true, its implications for African wildlife in the near and mid-term future could be significant.

Threats to wildlife from natural biological phenomena are being exacerbated by climate change and rising temperatures, scientists say.

Unusually warm weather was linked to the deaths of 200,000 critically endangered Saiga antelopes in Kazakhstan in 2015. They were killed when a naturally occurring bacteria in their nasal passages became lethal amid high daily temperatures and humidity.

Scientists say that harmful algal blooms are also increasing in size and frequency around the world as climate change pushes up global temperatures. This is especially important in southern Africa where they are rising at twice the global average, according to the Intergovernmental Panel on Climate Change.

McCann agreed. He said: "Higher temperatures exacerbate existing problems, in the case of algal blooms by promoting the proliferation of bacteria. Climate change is a threat multiplier, and we will see more of these events occur. As time goes on, there are likely to be more and more problems with watering holes in Africa."