Over a hundred African writers say justice must be served for victims of police brutality.

As African writers across borders, we denounce in the strongest terms the tyrannical and shameful persecution of innocent Nigerians by officers of the Special Anti-Robbery Squad (SARS) of the Nigeria Police Force and the continued harassment of peaceful protesters in the country.

We note that, as Chinua Achebe said, "We cannot trample on the humanity of others without devaluing our own." Nigerian authorities and the police have devalued themselves by keeping SARS in effect for as long as they have. This cannot be undone by merely disbanding, dissolving or otherwise rebranding SARS as SWAT, while still intimidating Nigerians who are exercising their rights to peaceful protest.

The list of innocent Nigerians who have been harassed, falsely imprisoned, tortured and extrajudicially murdered by SARS operatives is as long as the absence of justice for these victims is resounding. We note that reform of the police and policing system in Nigeria will not be complete without justice for victims of SARS brutality and the arrest, dismissal and prosecution of police officers found culpable of crimes against the people.

We, therefore, condemn the continued determination of the Nigeria Police Force to shield officers indicted in flagrant acts of brutality by either promoting them or redeploying them away from places where their reprehensible acts of cruelty have drawn public ire, or by replacing the label on SARS with SWAT.

Because the dead cannot cry out for justice, it is our duty, as the living and as writers and humans, to demand it for them. And so we stand firm to demand that every officer of SARS and the Nigeria Police Force in general who commits acts of brutality against our innocent brothers and sisters in Nigeria be subjected to an independent judicial inquiry.

We condemn the continued police harassment, arrest, detention and torture of peaceful protesters against police brutality as well as the empowerment and deployment of undesirable elements and sponsored thugs to attack protesters in Lagos, Abuja and Kano and other parts of the country by parties acting on behalf of the Nigerian state.

We note the threat by the Nigerian military to unleash its habitual terror on protesters and condemn this in the strongest terms. These protests are peaceful and are expressions of the fundamental rights of Nigerians, who should not be threatened by the military, the police or thugs while they go about the peaceable expression of their constitutional rights.

We strongly believe that the Nigerian military might serve public interest best if deployed against Boko Haram and bandits terrorizing the country, not against unarmed civilians exercising their rights.

We ask that the government of Nigeria, under President Muhammadu Buhari, take concrete measures, beyond the flippant rhetoric of years gone by, and immediately reform the police, the Nigeria Police Force as a whole. We insist that forthwith policing practices in the country be carried out with openness and transparency.

We will not condone further abuse of the fundamental rights of our sisters and brothers in Nigeria and elsewhere on the continent by security personnel who are sworn to serve and protect them.

We stand in solidarity with our brothers and sisters protesting on the streets of Nigeria, and ask that every right-thinking member of the global community raise their voice and support the agitation for justice for the victims of police brutality in Nigeria, the immediate termination of such inexcusable conduct by all units of the police and a sincere and tangible reform of the police in Nigeria. 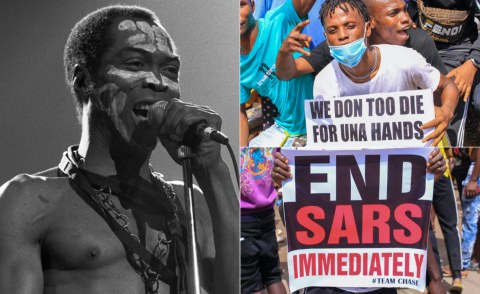 How Fela Kuti’s Music Has Impacted Activism in Young Nigerians
Tagged:
Copyright © 2020 African Arguments. All rights reserved. Distributed by AllAfrica Global Media (allAfrica.com). To contact the copyright holder directly for corrections — or for permission to republish or make other authorized use of this material, click here.