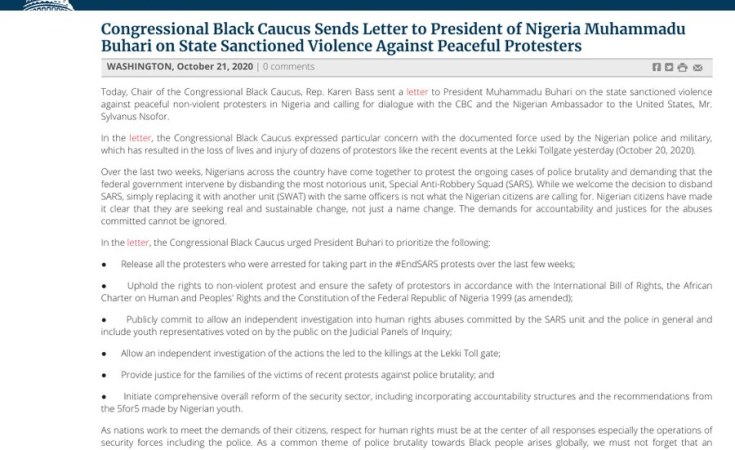 Washington, DC — Today, Chair of the Congressional Black Caucus, Rep. Karen Bass sent a letter to President Muhammadu Buhari on the state sanctioned violence against peaceful non-violent protesters in Nigeria and calling for dialogue with the CBC and the Nigerian Ambassador to the United States, Mr. Sylvanus Nsofor.

In the letter, the Congressional Black Caucus expressed particular concern with the documented force used by the Nigerian police and military, which has resulted in the loss of lives and injury of dozens of protestors like the recent events at the Lekki Tollgate yesterday (October 20, 2020).

Over the last two weeks, Nigerians across the country have come together to protest the ongoing cases of police brutality and demanding that the federal government intervene by disbanding the most notorious unit, Special Anti-Robbery Squad (SARS). While we welcome the decision to disband SARS, simply replacing it with another unit (SWAT) with the same officers is not what the Nigerian citizens are calling for. Nigerian citizens have made it clear that they are seeking real and sustainable change, not just a name change. The demands for accountability and justices for the abuses committed cannot be ignored.

In the letter, the Congressional Black Caucus urged President Buhari to prioritize the following:

●      Release all the protesters who were arrested for taking part in the #EndSARS protests over the last few weeks;

●      Uphold the rights to non-violent protest and ensure the safety of protestors in accordance with the International Bill of Rights, the African Charter on Human and Peoples' Rights and the Constitution of the Federal Republic of Nigeria 1999 (as amended);

●      Publicly commit to allow an independent investigation into human rights abuses committed by the SARS unit and the police in general and include youth representatives voted on by the public on the Judicial Panels of Inquiry;

●      Allow an independent investigation of the actions the led to the killings at the Lekki Toll gate;

●      Provide justice for the families of the victims of recent protests against police brutality; and

●      Initiate comprehensive overall reform of the security sector, including incorporating accountability structures and the recommendations from the 5for5 made by Nigerian youth.

As nations work to meet the demands of their citizens, respect for human rights must be at the center of all responses especially the operations of security forces including the police. As a common theme of police brutality towards Black people arises globally, we must not forget that an “injustice anywhere is a threat to justice everywhere.” What happens to one of us, happens to us all.

The Congressional Black Caucus remains committed to “Protecting the Homeland, the Motherland, and the African Diaspora.”

Read the original article on CBC.

A-Listers Speak Out on #EndSARS Protests in Nigeria
Tagged:
Copyright © 2020 Congressional Black Caucus. All rights reserved. Distributed by AllAfrica Global Media (allAfrica.com). To contact the copyright holder directly for corrections — or for permission to republish or make other authorized use of this material, click here.

If He Hits You, He Loves You - Zimbabwe Tackles Myths & Violence
Women